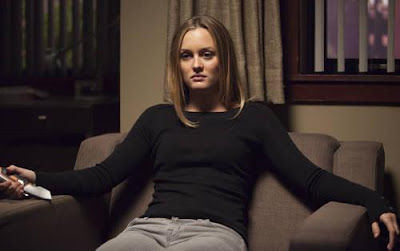 Everything you need to know about how serious The Roommate intends to be can be summed up in the following sentence: the social network that the characters use to connect with each other is called “Frienderz.” Frienderz! You actually have to try in order to come up with something that stupid; it doesn’t happen accidentally when you’re trying to come up with something good. The Roommate is a bad movie that aspires to nothing more than merely existing, though if you go into it with the right attitude, it ends up being far more entertaining than it has any right to be.

The film opens with the arrival of Sara (Minka Kelly) at the University of Los Angeles where she quickly becomes friends with Tracy (Alyson Michalka), who lives in the same dorm. After a night of drinking at a frat party with Tracy, where she meets Stephen (Cam Gigandet), to whom she’s instantly attracted despite his date-rapey vibe, Sara finally meets her roommate Rebecca (Leighton Meester). Rebecca is ultra friendly and works overtime to ingratiate herself with Sara, even putting up a poster for The Devil Wears Prada because that’s Sara’s favourite film. But it is not enough for Rebecca to simply be one of Sara’s friends; she needs to be Sara’s one and only friend.

The people standing in Rebecca’s way include Tracy and Stephen, Sara’s ex-boyfriend Jason (Matt Lanter), Sara’s friend and mentor Irene (Daneel Harris), Sara’s creepy professor (Billy Zane), and, sadly, a kitten named Cuddles. Rebecca makes it her business to dispatch these characters (though she only actually kills Jason and, sniff, Cuddles) and eventually Sara starts to think, “Gee, I think there might be something wrong with my roommate.” She attempts to escape by moving out but Rebecca won’t let go so easily, leading to the film’s utterly ridiculous climax.

So, to explain my rating for this film. I had a really good time watching this movie, mostly because of the company I was with, and that made it a four star viewing experience. As a piece of work, however, it only warrants one star because it is so thoroughly lacking in craft. Good films function according to some kind of logic. Even if a film is confusing, if it’s good you at least have a sense that the filmmaker is guiding the story according to some kind of internal logic that you may come to understand after subsequent viewings. The Roommate has no sense of logic internal or otherwise and by the end of the film it abandons all pretence otherwise. Take the final sequence of scenes, for example: Sara has moved out. She gets an urgent text from Irene and goes over to her apartment to see what’s up and finds Rebecca waiting for her. Now, we know how Rebecca got there because in one of the preceding scenes she manipulated Irene (who, never having met Rebecca, has no idea that she’s Sara’s crazy roommate) into picking her up at a bar. Irene is now a hostage so, presumably, after tying her up Rebecca took her keys. What we don’t know is why Rebecca has kept Irene alive since, A) she doesn’t need her to lure Sara to the apartment since Rebecca used Irene’s phone to text Sara, and B) as soon as Sara gets there, Rebecca attempts to kill Irene so, obviously, she is not averse to the idea of killing her. Further, while we know how Sara got into the actual apartment, since Rebecca left the door ajar, we don’t know how she got into the building. Nor do we know how Stephen got into the building later for the last minute save. Also, though this has nothing to do with the finale, why does she have to kill Cuddles? She tells Sara that he ran away so couldn’t she just have, I dunno, let him go?

But, really, does any of that even matter? No. The plot is stupid. It knows that it’s stupid and revels in it. With a PG-13 rating, it’s not a particularly scary movie (there’s ultimately very little violence and none of it graphic), nor a particularly sexy one (there is only the suggestion of nudity, no actual nudity); it’s low-rent camp, a film of such high extremes that it sails far above drama and into the realm of comedy. Unfortunately, only Meester seems to know what kind of movie it is and calibrates her performance accordingly. She’s actually kind of brilliant here, to tell you the truth. I mean, I sincerely hope that she develops an extensive enough filmmography that this isn’t the first thing anyone thinks of when they hear her name, but her work here is more solid than the film actually deserves.
Posted by Norma Desmond at 8:00 AM

So you're saying that this is to Single White Female what Cruel Intentions was to Dangerous Liaisons?

I've never seen Single White Female, so I can't really attest to the comparison. The Roommate is, however, way less awesome than Cruel Intentions.

hmmm it's frustrating when an actor is better than the film because the actor doesn't get the credit. BUT i haven't seen this movie and it looks terrible to me. according to this review, i guess it was.

thanks for saving me from ever wanting to watch this movie, well written review!