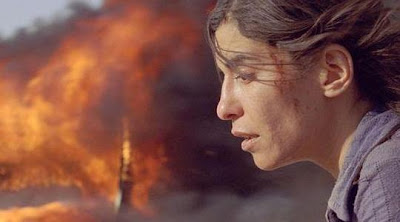 Denis Villeneuve’s brilliant Incendies is the kind of film that you just can’t stop thinking about after you see it. It burrows into your head and haunts you so that you find your mind returning to it again and again. I think this is the kind of movie that it’s best to go into knowing as little about the plot as possible, so if you haven’t seen it yet and plan to, I recommend waiting to read this review because I’m going to touch on some major spoilers. I honestly can’t stress this enough: go into the movie cold; it will be a much more fulfilling experience that way.

Incendies is about to siblings, Jeanne (Mélissa Désormeaux-Poulin) and Simon (Maxim Gaudette), twins who have just lost their mother, Nawal (Lubna Azabal). They are summoned by Nawal’s boss, a notary named Jean (Rémy Girard) who has been named executor of her will, which assigns each of the twins a task. Jeanne is given a letter that she must deliver to their father and Simon is given a letter that he must deliver to their brother. This shocks Jeanne and angers Simon – they have never known their father, though they have been given some information about him, and this is the first they’ve ever heard of having a brother. Simon refuses to play along but Jeanne decides to hold up her end, travelling to Lebanon in an effort to retrace her mother’s steps and find her father.

In Lebanon Jeanne begins to unravel her mother’s story, though for a time her discoveries raise more questions than they answer. In her mother’s home village she is informed that any child of Nawal Maran is not welcome due to Nawal’s murder of a political leader during the civil war. She also learns that during Nawal’s 15 year stint in prison she was raped repeatedly, resulting in pregnancy. Jeanne is horrified to learn that her brother is the product of rape and begs Simon to join her so that they can support each other as they put the final pieces of the puzzle together.

One of the smartest things the story does is that it lets the audience get a couple of steps ahead of Jeanne. We already know that the brother Jeanne is searching for was not born in prison, that he was the product of a love affair that resulted in the death of Nawal’s lover and her own exile from the village after giving birth and giving the baby up to an orphanage. The first revelation, then, is that she and Simon are the products of rape. The second is the identity of their father – a question whose answer we suspect long before it is confirmed and we hope against hope that it is just a red herring because it is so monstrous. When a shell shocked Simon returns to Jeanne after a meeting with a former warlord and asks her in her capacity as a mathematician to confirm that “one plus one must always equal two,” we’re just as devastated as they are by the solution to the equation, not because we’re surprised but because we’ve had so much time to ruminate on it.

Incendies deals with big themes, the biggest being the irrationality of violence. It tackles this subject in two ways: through the secret at the narrative’s heart and through its depiction of race and religion. When the civil war breaks out, Nawal makes her way back to her village in order to find her son and rescue him before he can be caught in the crossfire of the fighting. At one point she pretends to be Muslim in order to hitch a ride with some fleeing refugees. The bus is stopped by members of the Christian militia, who proceed to slaughter the people on the bus first by shooting it up and then by drenching it in gasoline. Before the match can be lit, Nawal shows them her cross and reveals that she’s a Christian, thus saving her life. The implication of all this is that if the distinction is so negligible that one can easily pass simply by saying that they’re a member of either group, then it is a wholly intellectual construction rather than a natural difference. What is the point of destroying each other over a difference that must be created into existence?

With regards to the Greek tragedy angle of the story, while this element of the plot might be written off as something entirely too convenient to be believable, I think that would miss the point. What this plot point is figuratively expressing is that you can’t do violence to someone else without also inflicting it to some degree on yourself, which makes the act of war and all its atrocities and reprisals and reprisals of reprisals, etc. a fundamentally self-defeating exercise. The point of the film’s big revelation isn’t its inherent shock value, but to explore how human beings must talk ourselves into our hatreds when the natural bonds that exist between us are far more compelling.

The narrative is driven by a carefully constructed feeling of tension that Villeneuve sustains right up to the final credits. This is a wonderfully directed film and very well-acted. Azabal plays the character at the centre of it all; in many ways the story rests on her shoulders and she carries it very well. She creates Nawal as a pillar of strength, a woman who endures and cannot be broken - until, in one moment, she is absolutely shattered and falls away from the world. It is a devastating performance that makes Nawal (who, in many ways, remains just as mysterious at the end as she was at the beginning) an incredibly memorable character. The film is more than worthy of her performance - it's a beautiful, heartbreaking piece of work.
Posted by Norma Desmond at 8:00 AM

I'll also add that Villeneuve, despite being a French Quebecker, blew me away with its degree of realism.

Even though many people in Quebec (yes, many Quebeckers are that dumb) complained that Jeanne and Simon mostly speak in French with a Quebecker accent, Villeneuve just got it right. The film eloquently shows that many Lebanese immigrants Montreal welcomes are so assimilated into French Canadian culture.

I should know that, because I live a few kilometres from where the scenes in Montreal were shots.

"The point of the film’s big revelation isn’t its inherent shock value, but to explore how human beings must talk ourselves into our hatreds when the natural bonds that exist between us are far more compelling."

Good point. I didn't see it like that when I saw the film a few months ago. I wasn't dismayed by the lack of reaction by Jeanne and Simon at the end when they meet Nihab. After all, Villeneuve also illustrates the fact that being on the fence is part of human nature. As much as the twins would want to hate Nihab for what he did to Narwal, they feel a bond to him.

It surprises me that people would complain about the twins having Quebecker accents. After all, they would have come to Canada as children and spent the majority of their lives in Quebec.

Even though I haven´t seen the original Wajdi Mouhad´s play, I can say that the director excelled in a mesmerizing way. Especially Lubna Azabal´s performance was striking as she carried the movie literally on her shoulders. Incendies is definitely worth watching !