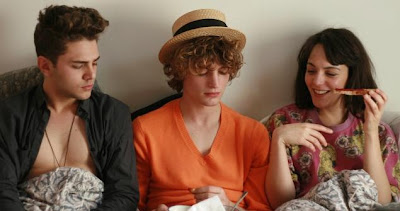 Heartbeats is Xavier Dolan’s follow-up to his brilliant debut I Killed My Mother. He’s an extremely talented filmmaker but is, at this point, perhaps a little too enamoured with his own style. Heartbeats has an interesting (albeit somewhat thin) premise but by the end it begins to buckle under the weight of the stylistic flourishes that Dolan mixes in. It is not a bad movie by any means – it is, in fact, rather good – but there is a distinct lack of balance between the visuals and the content.

Heartbeats is about two friends, Francis (Dolan) and Marie (Monia Chokri), who both find themselves infatuated with Nicolas (Niels Schneider). Nicolas, who bears a resemblance (not uncommented upon by the film) to Michelangelo’s David, is mysterious in that some clues point to him being interested in Francis, while others point to him being interested in Marie. Francis and Marie proceed carefully, trying to draw Nicolas out and becoming more and more at odds with each other. Eventually the competition between Francis and Marie supplants whatever attraction Nicolas may have for either of them and it becomes about the act of winning, about the drama of competition, rather than the prize to be won.

Nicolas remains a shadowy figure of whom we probably know less at the end than we did at the beginning. The film keeps him at arm’s length, an object to be aspired to but never attained. Scenes which unfold from Marie’s point-of-view suggest his heterosexuality (though, to be sure, he seems to be at best indifferent to Marie), while those seen through Francis’ eyes suggest, if not homosexuality exactly, at least a degree of sexual fluidity. Nicolas is everything because, ultimately, he is nothing; he is a canvas on which Marie and Francis can paint freely. Throughout the film they talk about how amazing Nicolas is but as a character he’s pretty much a blank, all “tell” and no “show.” I’m willing to concede that Dolan may just be expressing that Francis and Marie only see Nicolas through the prisms of their own desire and project what they want onto him rather than look at what’s actually there, but that doesn’t make Nicolas a less tiresome character. By the end, when Francis and Marie can only look at Nicolas with disdain, we can only wonder what took them so long.

Heartbeats is an extremely good looking film. Dolan has a vibrant visual style and a strong sense of how to marry visuals and soundtrack (in that regard he reminds me quite a bit of Tarantino). The film is full of striking images, perfectly composed and framed, and Dolan directs with grace and confidence. That being said, however, there is a great deal of repetition in the visual/narrative strategies that he uses. The first time he does something it’s great. The second time, it’s still pretty good. By the third or fourth time, you begin to grow weary and wonder if perhaps he’s using his directorial mastery to cover up for some shortcomings as a writer. There’s just not enough there there and the film ultimately runs out of steam before it actually ends.

I wouldn’t go so far as to call Heartbeats “disappointing,” but it is certainly flawed. There are many great individual moments throughout: Francis’ confession to Nicolas, not just about his attraction to him, but about all his past heartbreaks and the real meaning of those notches he makes underneath his bathroom mirror; Nicolas’ birthday party, where Francis and Marie, the only people to have brought him gifts, try to erode the other’s confidence by undermining each other’s selection; the sequence of scenes which take place out in the country as Francis and Marie’s rivalry reaches the peak of its intensity, leading to an angry (and somewhat hilarious) confrontation. These great moments, however, make the mere adequacy of other moments stand out all the more. I really don’t want to be down on this movie because I actually do think that it’s quite good and full of indications that Dolan is a filmmaker whose development will be worth watching, I just don’t think that Heartbeats really pushes itself to the next level, the level of unqualified and absolute success.
Posted by Norma Desmond at 8:00 AM

I can't but recommend Heartbeats by Xavier Dolan. Everything in the film is just well balanced, the picture, the musics...

I was actually surprised to see that his next movie is on a crowdfunding website (touscoprod.ca) in order to find money to produce it ! But i joined this opportunity to help this talented director, and I really hope that he'll get more recognition with Laurence Anyways. Here is the link : http://www.touscoprod.com/ca/pages/projet/fiche.php?s_id=2

And also an interview he did in french about it (english subs in comments) : http://www.youtube.com/watch?v=HHFziRhHFJs