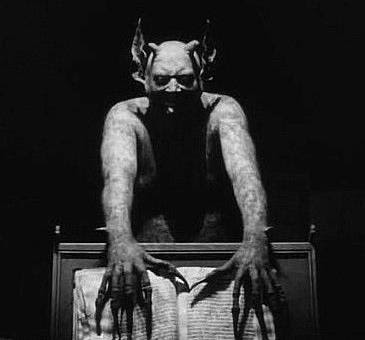 Benjamin Christensen’s Haxan (Witchcraft Through the Ages) is a strange little movie. A documentary-fiction hybrid, it examines the superstitions and lack of knowledge about the nature of mental illnesses that led to the witch hunts of the middle ages, and though much of it is stark and brutal, there are also some surprisingly light moments. Haxan is a history lesson and an entertainment, a film quite unlike any other.

The film begins with title cards which help to put the ideas and attitudes it is exploring in the right temporal context. A lot time is spent exploring ideas surrounding hell and Satan (played by Christensen) and popular ideas that linked the two with sexuality generally and women’s sexuality specifically. This is an unabashedly sexual film that definitely pushes the envelope in terms of what filmmakers could get away with in the 1920s both in terms of depictions of sexuality but also with respect to demonstrating how people accused of witchcraft were tortured into “confessing” their crimes. Haxan is an often harrowing viewing experience that goes to great lengths to demonstrate the horror experienced by those accused of witchcraft. Christensen builds a great sense of tension in all of the "recreations" which ultimately makes the breaks in the story a welcome respite rather than a distraction from the action.

Though the film is broken up into chapters, there is one sustained narrative in the middle of the film concerning an old woman who has been accused of witchcraft who then turns around and accuses her accusers of being witches as well. A young mother is one of the accused and endures some of the film’s most brutal torture, bearing up under it until finally being broken when one of her jailers manipulates her by telling her that if only she’ll give him some of her witch related secrets, he’ll let her escape so that she can return to her baby. This is a lie, of course, and her desperate attempt to appease him only results in her final condemnation.

Christensen concludes his study through a vignette set in the modern age and concerning a sleepwalker and a kleptomaniac, suggesting that the behaviours that once made others suspect the occult were actually the result of some form of psychological disorder. Christensen doesn’t get too deep into this aspect of the film and these scenes aren’t as compelling or interesting as the preceding vignettes, but it does a decent job at tying everything together. Since the film is broken up into sections, it never builds up a great deal of momentum but Christensen approaches the vignettes with enough energy and creativity that the individual sections are able to hold your attention. He is also able to infuse the project with enough humour (albeit some of it incredibly perverse) that it provides a nice counterbalance to the darker moments.

Christensen is an interesting filmmaker with a very distinct style. He isn’t as well remembered as his countryman Carl Theodor Dreyer (whose great film The Passion of Joan of Arc also features scenes of trial by torture), for whom he starred in the film Michael, but his work holds up incredibly well and the imagery throughout the film is striking. Silent films tend to be a deal breaker for a lot of people, but this one is a very engaging piece that would ultimately be little improved by the addition of dialogue.
Posted by Norma Desmond at 8:00 AM

I came across your review by simply googling 'haxan review'. Having read yours, I would suggest watching a 1968 edit named 'Witchcraft Through the Ages' by Brion Gysin & co (William Burroughs is a narrator in this one) - sorry i am not sure about the publisher - and its review here: http://www.dvdverdict.com/reviews/haxan.php, where i really dig the way the insight about the power relations is considered...