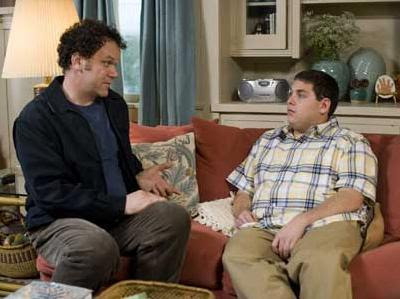 Cyrus is a film that builds itself around an incredible sense of awkwardness. Just when you think it can’t get more awkward or, at the very least, that the film will give you some respite by looking away from the awkwardness, it instead proceeds to the next level and just keeps watching things unfold. Directed by Jay and Mark Duplass, two of the founders of the mumblecore film movement, Cyrus unfolds in a simple, unfussy way and is never afraid to get a little bit weird (or, you know, a lot weird).

Our protagonist is John (John C. Reilly), a deeply unhappy and lonely man hit hard by the news that his ex-wife (Catherine Keener) is getting remarried. She and her fiancée drag him to a party where he gets spectacularly drunk, strips his soul bare in a moment of brutal public honesty, very nearly turns himself into a social tragedy with an impromptu rendition of “Don’t You Want Me,” and manages to charm a woman despite meeting her as he’s taking a leak in the bushes outside the house. The woman is Molly and she’s immediately drawn to John, much to his confusion (and gratitude). She’s also played by Marisa Tomei so you know that there’s some kind of horrible catch here.

The catch is her son, Cyrus (Jonah Hill), a 21-year-old with a fairly deep-seated Oedipus complex. Cyrus attempts to come between John and Molly – subtly at first but as the couple grows closer and more committed, his strategies become more desperate and obvious – which eventually leads to an all-out war between Cyrus and John. The laws of movie convention dictate that this can really only end in one way and the fact that Cyrus does nothing to subvert narrative expectations in that regard leaves it feeling somewhat deflated as it reaches its conclusion.

Right up until the end, however, Cyrus is a really good movie, primarily because it takes such care in rendering its characters. The relationship between John and Molly is very sweet and Reilly and Tomei have an easy, relaxed chemistry. Both are lonely but in different ways. John longs to connect with someone, to engage with them on an emotional level in a way that he was unable or unwilling to with his ex-wife. Molly is a caretaker drawn to those in need, which is obvious from her first scene when she comes to John’s rescue by turning his sad, drunken solo into a duet. John wants to be wanted and Molly needs to be needed and so their coming together makes a strange kind of sense.

The real surprise is the character Cyrus. Depicting two nice, normal people like John and Molly is relatively easy but creating a character like Cyrus and managing not to go right over the top with him takes skill. Yes, he’s weird. His relationship with Molly is creepy and he does strange things like hiding John’s shoes in a bid for psychological dominance, but the film develops him enough that he’s not a cartoon-like antagonist. He’s had a very sheltered and insular life with Molly, one which has left him socially underdeveloped and unprepared, in many ways, to confront the realities of the world. The foundation of his life, therefore, is very unstable to begin with and John’s arrival is a direct threat to what little he has. As the story moves towards its conclusion, we come to understand that his actions are motivated less by malice than by fear. When, in his moment of greatest anguish, he tells John that Molly is all that he has, we believe that. These aren’t just words he’s spitting out; it’s the naked, unabashed truth.

Hill underplays to magnificent effect, keeping Cyrus within the realm of the believable (albeit at the extreme end of the spectrum) and giving him layers rather than falling into the easy shorthand of exaggeration. I’ve never really been sold on him as a performer, but I think this movie makes it clear that he isn’t just a Seth Rogan clone, but a real actor.

Cyrus has quite a bit going for it but the very conventional ending ultimately makes it a fairly average film. It has some really great moments scattered throughout and the performances are all quite good, it just sort of runs out of steam in the final stretch.
Posted by Norma Desmond at 8:00 AM

I had a slightly different take on Hill's performance in that I kind of WANTED him to go more over the top; although I agree that part of what makes it work is his restraint. Here's my blog on it: http://tinyurl.com/4h2qanq

John C. Reilly and Jonah Hill in the SAME MOVIE -- it's like God heard my prayer or something.