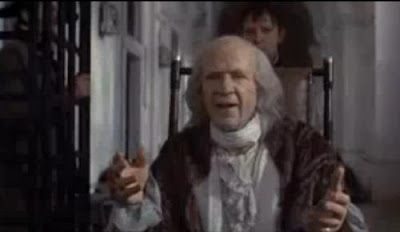 Year: 1984
Director: Milos Forman
Great Because...: It’s simply magnificent. After years spent lamenting his position, his shortcomings as a composer, and seething with jealousy over the abilities and the fame of Mozart, Salieri finally embraces his status and with the film’s final words – “Mediocrities everywhere, I absolve you. I absolve you. I absolve you all.” – gives people everywhere permission to accept their limitations, to glory in adequacy when greatness is out of reach. After all, if everyone in the world was a genius, then it wouldn’t mean anything to be a genius.

Salieri is convinced that God is playing with him, that he's turned into a toy for the Almighty’s amusement. Why else would he have been born with an ear that can recognize musical greatness but without the imagination to create greatness? He is not a bad musician. On a technical level he is fine, good even; but he doesn’t have that extra something that would raise him above the rabble. And who does? A boorish young upstart named Mozart who has none of Salieri’s refinement or even his dedication to craft, but has been kissed by a divine muse. Mozart is a hit with audiences, which would be bad enough, but what makes it even worse is that, being a connoisseur, Salieri can recognize the greatness of Mozart’s work, which just makes him hate him even more.

Saleri plots against his rival and even succeeds at destroying his career – or so he thinks. Mozart falls out of favour and into destitution and disease, but his work will live forever because it’s so good. Saleri enjoys a brief period of popular success but, as he confesses as the film ends, this is not the reward he thought it would be, but instead a prolonged form of torture. He has lived long enough to see his music fall back out of favour, to hear it played less and less, to watch helplessly as he outlives his own legacy. He’s driven mad by all this and the finale shows him being wheeled through the halls of an insane asylum as he doles out absolution to those around him.

This ending works for a lot of reasons. For one thing, it has a nice, larger-than-life, operatic feeling to it with Salieri declaring himself the king of mediocrities and then showing his benevolence to his brethren. For another, it allows the film to close on a note that’s in keeping with the tone of the rest of the film. Amadeus is a film of beautiful excess with a lively spirit and a strong current of humour running throughout. If the film had ended with Mozart’s burial, it would conclude on a very dark note. Instead it ends on a darkly comic note, a note of bizarre triumph that just seems so right for this film. It’s not only a memorable ending, but one that makes you want to watch the film again immediately – if that isn’t the definition of a great last scene, I don’t know what is.
Posted by Norma Desmond at 8:00 AM

Great post! I agree about the tone of that final scene: operatic with a hint of the ridiculous, like so much of the rest of the film. I really want to watch this one again now!

F. Murray Abraham is so awesome in this movie - definitely worth watching over and over again.

I would add to it that the inclusion of Mozart's signature laugh adds a tinge of dark brilliance to the finish: Salieri remarks earlier in the film that it was God laughing at him through Mozart, and spends his time plotting revenge against God, driven by his own jealousy, bitterness, and desire for adoration; he doles out the absolutions and calls himself the patron saint of mediocrities everywhere, but God is still laughing at him underneath it, and the torture, and adoration of Mozart's genius, coupled together as they always have been for him, continue forever. It's one of the most brilliant endings ever filmed.