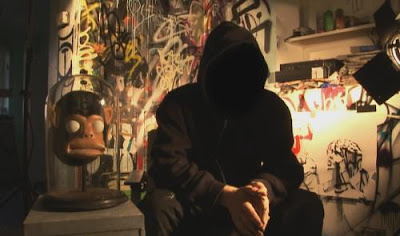 Is it real or is it a hoax and does it matter when it’s this entertaining? Exit Through the Gift Shop, Banksy’s documentary about street art, raises this question, though judging from the reactions from the film’s producers, it does not do so on purpose. Personally, I think that it was perhaps conceived as a mockumentary and then accidentally became true in a The Producers-like twist. Either way, I’m pretty sure Banksy is having the last (and best) laugh.

The film centers on Thierry Guetta, a fairly normal guy save for his almost compulsive need to record every minute of his life. While on holiday in his native France he discovers that his cousin is the street artist known as “Invader” and through him connects with a network of street artists who allow him to record them as they go about their work. One of the artists is the LA-based Shepard Fairey, whose work inspires Guetta to decide to put his footage together in the form of a documentary (though he doesn’t really want to make a documentary and in fact never even watches the footage he’s been collecting for years). While compiling more footage Guetta meets Banksy, who allows him backstage access to his show “Barely Legal” and eventually takes over the documentary when it becomes clear that Guetta has no idea what he’s doing (or, as Bansky puts it, “It was at that point that I realized that maybe Thierry wasn’t actually a filmmaker and he was maybe just someone with mental problems who happened to have a camera”).

Once Banksy takes over, the film officially becomes about Guetta himself, who has decided that he wants to become a street artist. Actually, scratch that. What he wants is to be famous and he decides that he’ll make himself famous by playing the role of street artist. He develops the persona Mr. Brainwash and decides to put on a massive art show which will be called “Life Is Beautiful.” He’ll use the techniques that he’s learned from various street artists to create his own art work – and by “create his own art work” I mean that he hires a staff of people to make the ideas that he comes up with into reality. To the shock of everyone, Life Is Beautiful is a hit and Guetta sells a million dollars worth of art, begging the question, what is art and what makes an artist?

Exit Through the Gift Shop unfolds with a humorous tone and though it frames Guetta as a ridiculous figure, it doesn’t do so maliciously. I think that while the filmmakers find Guetta an easy figure to mock – particularly once he evolves from being an ardent enthusiast for street art into an artist himself – there’s also a sense that they feel like the public is getting what it deserves in him. If he’s a counterfeit artist (and whether he is or not is, I suppose, up for debate), then the art he’s put out that the public has embraced is just fool’s gold. But, then again, if art is in the eye of the beholder, none of that matters. As Guetta argues at the end of the film, history will judge whether or not he’s really an artist.

There’s a conversational style to Exit Through the Gift Shop that I think makes it really accessible and it’s an extremely entertaining film. In those respects, it reminds me quite a bit of James Marsh’s Man on Wire, though I don’t think that this film is ultimately on quite the same level as that one. Still, it’s a really good movie that I think can be easily enjoyed even by people with absolutely zero interest in the art world.
Posted by Norma Desmond at 8:00 AM

Ah yes!! Saw this last August, and hasn't it caused a stir world wide??!!
Everyone who has seen it has raved aboutit, but what me laugh is the amount of people who believe it is 100% real!!
it is an excellent fictional documentary and full of laufghs. it played here in my home town at the anual international film festival and was the highlight of the 30 films screned.
Have read many other positive reviews elsewhere on blogosphere and it is nice to see it being enjoyed world wide.

I don't know that it's totally fictional, but I definitely don't think it's 100% real. It's a very enjoyable film, at any rate.