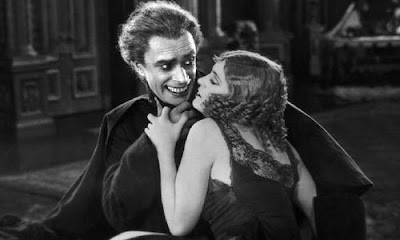 Pity the man who laughs because he's certainly not laughing with everyone else. Adapted from the novel by Victor Hugo and directed by the German Expressionist Paul Leni, The Man Who Laughs is a much darker and more atmospheric film than a summary of its plot would suggest. Perhaps valued most today for having been one of the influences in the creation of The Joker character from Batman, it is nevertheless an interesting film in its own right and Conrad Veidt's performance as the eponymous character is one of enormous power.

The story begins in England in 1690 when a nobleman who has offended King James II is sentenced to death by iron maiden and his son, Gwynplaine (played as an adult by Veidt), is handed over to a gypsy surgeon named Hardquanonne (George Siegmann), who carves a permanent smile into the boy's face. Abandoned when the gypsies are forced to flee England, Gwynplaine wanders the snowy landscape until he comes to the caravan of Ursus (Cesare Gravina), where he and the baby girl he's saved from freezing are taken in. Gwynplaine and the girl, eventually named Dea (Mary Philbin), are raised by Ursus, who makes money through a stage show which capitalizes on people's fascination with Gwynplaine's disfigurement. Gwynplaine's tragedy is twofold: he's mocked and scorned by everyone except Dea, who is blind and does not know about his deformity. He loves Dea but feels he can't marry her because if she could see him, she would never love him.

At the English court a battle of wills is being played out between Queen Anne (Josephine Crowell) and the Duchess Josiana (Olga Vladimirovna Baklanova), who lives on the lands stolen from Gwyplaine's family. When word gets to the Queen that the rightful owner of those lands is alive in the form of the famous Man Who Laughs, she orders that he and Josiana marry so that the rightful heir might be restored and her rival humiliated. What she doesn't count on is that Josiana isn't entirely opposed to this match or that Gwynplaine will have it in him to stand up for himself.

While The Man Who Laughs suffers from a few moments of turgid melodrama surrounding the relationship between Gwynplaine and Dea, it's still a quite interesting and engaging film. It is surprisingly bold, given the time period, in terms of its depiction of female sexuality through the character of Josiana, who has a very brief nude scene at the beginning. Josiana is depicted as being very loose with her favours (with everyone except her foppish fiancee) and as having a fetishistic interest in Gwynplaine's deformity. There is a scene in which she lures him to her chamber with the intent on seducing him that subverts traditional notions of gender dominance and subserviance in a really fascinating way and works to solidify Gwyplaine's status as a victim.

The Man Who Laughs plays on the idea of "monster" as victim in a lot of ways and the success of this depends largely on Veidt. With that grotesque grin immobilizing the lower half of his face, Veidt is at a distinct disadvantage in terms of being able to express himself and yet he pulls it off brilliantly. There is a rawness to all of his emotions, almost a desperation to convey them to the people around him who largely refuse to see. His lips are smiling, but his eyes are not. The performance he renders is quite moving and conveys so much about the psychological state of the character. It's one of the best performances I've ever seen in a silent film and definitely helps raise The Man Who Laughs above the melodrama its story is always threatening to sink into.

The man who laughs, like the actual guy, is totes freeking me out. I've been staring at his pic for like five mins.

He's creepy, but he's got nothing on how creepy the character looks when played by the child actor.