#5: Martin Scorsese
When he's on, he is on, creating some of the best films ever made. Even when he's a bit off and careens into self-indulgent territory (*cough*Gangs of New York*cough), he still makes a film worthy of discussion and debate. Even if he wasn't the director of such films as Taxi Driver, Raging Bull and Goodfellas, his tireless work in the field of film preservation would be enough to put him permanently in my good graces. 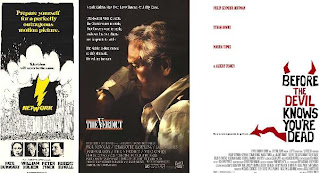 #3: Pedro Almodovar
I'm not up on all of Almodovar's oeuvre just yet, having so far only seen his films from the late 90s onward, but I have yet to come across an Almodovar film I haven't liked. Penelope Cruz, an actress who has really come into her own in the last few years, is never better than when she teams up with this master filmmaker.

#2: Quentin Tarantino
He's the man. He got me hooked with Pulp Fiction and ever since then I have been one happy viewer, duly rewarded every time he makes a movie. Pulp is still my favourite, but second place is ever changing, depending on my mood. 2014 and the third installment of Kill Bill can't come soon enough.

#1: Guy Maddin
I don't use the word genius very often, but it's the only word sufficient to describe Guy Maddin. One of the most exciting and least appreciated filmmakers working today, I always eagerly anticipate seeing what he'll do next.

OMG you have to watch Almodovar's Women on the Verge of a Nervous Breakdown!

Thanks as well, because I had the poster I cut from a magazine of one of Guy Maddin's films and I didn't know which movie it was - am going to look it up!

missing the Coens and PT Anderson and Darrin Aronofsky, but perhaps the latter 2 are not prolific enough.

You so rock for including Almodovar in your list. My college Spanish advisor made me fall in love with him when she showed us "Todo Sobre Mi Madre" in class. I've followed everything he's done since then.

@Moshimoshineko: Women on the Verge has been on my list of movie to see for a while but it's surprisingly hard to track down where I live. It's been on my Netflix list forever!

@Floating Red Couch: The Coens were on my long list and I find Anderson and Aronofsky to be kind of hit and miss.