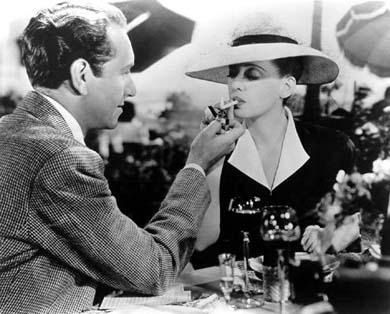 "Don't lets ask for the moon. We have the stars."

I'm not sure that there's any actress other than Bette Davis who could really sell that line. She has such a complete grasp of her character in Now, Voyager that we are made to understand those final words on the multiple levels intended, how it relates not just to one relationship but to several and, indeed, to her character's entire identity. It's a good line, a great performance, and a pretty damn good movie.

Now, Voyager stars Davis as Charlotte Vale, a Boston socialite whose confidence has long since been shattered by her domineering mother (Gladys Cooper). Her increasingly fragile mental and emotional state prompts her sister-in-law to bring her into contact with Dr. Jaquith (Claude Rains), a psychiatrist who recommends that she spend some time in his sanitorium. Mrs. Vale is adamently against it, believing that it will leave the family open to nasty gossip and that it's a sign of unforgivable weakness in Charlotte, but Dr. Jaquith prevails and takes Charlotte away. Finally out from under her mother's thumb, Charlotte begins to relax and create an identity for herself that is separate and apart from the identity forced on her by her mother. On her release from the sanitorium, she opts to take a cruise rather than go straight home and there meets Jerry Durrance (Paul Henreid), a man anchored to his unhappy marriage by his troubled daughter.

Of course Charlotte and Jerry fall in love and of course the situation is impossible. They go their separate ways, she returning home and finally asserting herself with her mother. She becomes engaged but, after seeing Jerry again, breaks it off, leading to an angry confrontation with her mother and consequences no one could have forseen. She returns to the sanitorium and develops a friendship with Tina (Janis Wilson), a young girl who just happens to be Jerry's daughter. In an "only in the movies" kind of development, Charlotte returns to Boston and takes Tina with her, an act which meets with the approval of both Jerry and Dr. Jaquith.

From an analysis perspective, Now, Voyager is a pretty easy film to read because it really doesn't take pains to hide what it's doing. Davis begins the film looking frumpy and her transformation into glamour also marks the transition in her mental state. That this transformation will happen is never in question due both to narrative conventions and the conventions of naming - her last name is "vale" (ie veil), indicating that we have an unclear view of her and that the obstruction will eventually lift. The film wears its cues on its sleeve. One of my favourite shots is at the beginning when the film first introduces us to Charlotte, cutting to her from a shot of Mrs. Vale's hands, her fingers fidgetting like someone pulling on marionette strings.

The performances in the film are really fantastic. Davis, whose real life toughness is legendary and defines many of the characters she played, has no problem playing the insecure bundle of nerves that is Charlotte. The transformation that Charlotte undergoes in not just a matter of changing her hair style and wardrobe; Davis changes the way she carries herself, the way her body seems to relate to her surroundings and she does it gradually. Even after the makeover, Charlotte carries herself as if she's still the "fat old aunt" and it takes a long time for her confidence to catch up to her appearance. Davis understands this character and allows her to develop in a way that seems natural and unforced. As Charlotte's hard as nails mother, Cooper renders a fairly chilling performance, levelling the characters around her with a look and taking ownership of every scene she's in. She and Davis both received Oscar nominations for their performances and it was well deserved. Watching them on screen together is absolutely captivating.

Now, Voyager is a really well put together film that manages to put a lot of story into its two hour running time, moving fast enough that it never feels weighted down by its various plot points. It's also kind of an odd film, especially since it's considered a romance story, in that it's ultimately about settling. Charlotte can't be with Jerry so she'll settle for being a mother figure to Tina. Charlotte had a bad mother but she'll settle for being the kind of mother to Tina that she herself would have wanted. When you think about it, it doesn't really cast Charlotte in the best light because there's a sense in which she's using Tina as a vessel to satisfy her own needs and desires. But Davis' performance is so sympathetic that you don't really think about that and instead you just hope that she finds some way to finally be happy. It's one of my favourite performances of hers and I think this is one of her best films. Certainly it's one of her most enduring.