Review: Everything Is Illuminated (2005) 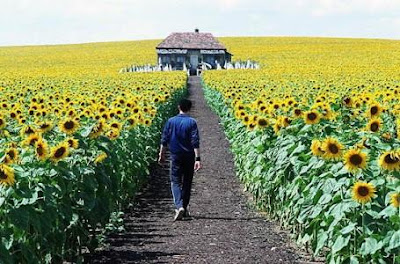 "Everything is illuminated in the light of the past." In Everything Is Illuminated, history is the real thing and the present is something which will become real later, when it is remembered rather than experienced. The film, the directorial debut of Liev Schriber and adapted from the novel of the same name by Jonathan Safran Foer, starts as broad comedy and slowly becomes deep drama. True to the story's spirit, it's the kind of film that grows on you after the fact.

Elijah Wood stars as Jonathan Safran Foer, a young man attempting to understand himself by learning the family's history. To this end he travels to the Ukraine, where his grandfather Safran Foer narrowly escaped the Nazis with the help of a woman named Augustine, whom Jonathan hopes to track down. With the help of Alex (Eugene Hutz) and his grandfather, also named Alex (Boris Leskin), who specialize in Holocaust tours, he sets off in search of Trachimbrod, his grandfather's village.

The film begins as an ethnic comedy about people from very different worlds. Jonathan's habit of collecting things from his journey - dirt, food from his plate, a grasshopper - perplexes Alex and his grandfather, and his insistence that he doesn't eat meat is cause for great concern. For his part, Jonathan is baffled by the grandfather who, despite being the driver on this tour, insists that he's blind and has to take his "seeing eye bitch" Sammy Davis Jr. Jr. everywhere; and he's amused by Alex, who seems to have learned English without ever having heard it spoken and whose speech is always just a little bit off. "Many girls want to be carnal with me because I'm such a premium dancer," he explains.

As the trio gets closer to Trachimbrod - or what was once Trachimbrod - the tone begins to shift. Jonathan mentions that the Ukraine was not a pleasant place for Jews in the years leading up to the war, which confuses Alex and sends his grandfather, who seems very familiar with the countryside, into a deep silence. As they get closer to the answers Jonathan is seeking, Alex realizes that he, too, is missing pieces of his family history and has to fill in the blanks before he can truly understand himself.

Schrieber, who also adapted the screenplay, handles the shift in tone and incorporates the subsequent flashback sequences well, providing the film with a nice sense of flow so that nothing seems abrupt or out of place. He has an eye for composing shots - the scene in which the remains of Trachimbrod are found is particularly spectacular in this respect - and puts it to good use, creating a film that is often visually stunning. At the same time, however, he doesn't let visual style intrude too much on the narrative itself and many of the most moving and memorable moments involve the characters just talking as Schrieber films them in a simple, unintrusive way.

If the film has a weakness, I suppose it's that its two main characters - Jonathan and Alex - aren't allowed much depth. Jonathan is little more than his collection of items, a curious bystander trying to construct a narrative out of all the bits of information he can get. Alex is practically a cartoon, a young man firmly entrenched in American breakdance culture, whose purpose is to say things that are funny because his English is just slightly to the left of being correct. The characters who run deeper are the grandfather and Lista (Laryssa Lauret), a woman who holds the secrets of Trachimbrod. But, maybe that's the point. The grandfather and Lista are people who are "real" because they have histories; Jonathan and Alex are people just starting the process of creating their histories. They can't really exist in a meaningful way until there is enough past behind them to buoy the present. I'm willing to give Everything Is Illuminated the benefit of the doubt on that score because there's just so much in the film that makes it worth recommending. It's a wonderful debut from Schrieber, who will hopefully find his way behind the camera again sometime in the future.