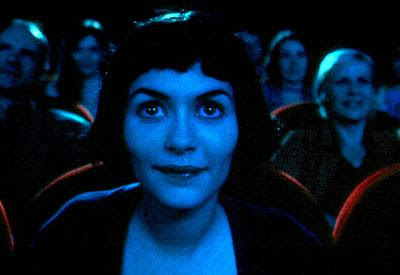 Like a ray of sunshine Amelie descends to illuminate the cinematic world with its story of a good woman who wants nothing more than to make other people happy. One of those rare films to become a crossover success during its initial theatrical release, it has not lost an ounce of its charm in the years since. With the help of its star marking performance from Audrey Tautou, it remains an engaging and lovely film experience.

Tautou stars as Amelie, a kind hearted waitress at a cafe whose isolated childhood has left her shy and afraid of forging the human connections which nevertheless fascinate her. One day by chance she finds a box hidden behind a brick in her apartment. It contains the treasures of someone’s long ago childhood and she becomes determined to find its owner and return his belongings to him. With a bit of amateur detective work she locates the man who was once the boy who hid his possessions and contrives a way to return them to him anonymously. She wants nothing from the experience – not even thanks – except the joy of knowing that she has made someone happy and afterwards decides to devote herself to helping people.

Her next mission, and the film’s major narrative preoccupation, is the return of a book of photographs to a man who collects the discarded pictures outside of photo booths. The man, Nino (Matthieu Kassovitz), is quite a lot like her, introverted and fixated on his solitary hobby, though perhaps not quite as afraid of intimacy. She quickly comes to like him but a life that has been mostly devoid of any real affection has left her afraid of getting close to anyone and so instead of really pursuing him, she puts her mind to fixing one co-worker up with the ex-boyfriend, and current stalker, of another. This works out well, at first, but the relationship she’s manipulated soon sours and her own romantic destiny can’t be deferred any longer. Her chance for happiness is right in front of her, she has to grab it or risk missing out on it forever.

Directed by Jean-Pierre Jeunet, the story of Amelie is told in a jaunty, joyous way that makes it easy to engage with. It is earnest but edged with enough cheek that it doesn’t seem naively upbeat, which is one of the things that has helped to preserve it over the years. There are elements to the story that could easily turn it into a much darker film – Amelie’s difficult relationship with her parents, for example, which has accustomed her to living in a bubble and rendered her unable to connect with other people in any meaningful way – but these aspects are used as shading for the comedy rather than dwelled on for their inherent drama. This works because Amelie is such an positive character and doesn’t really seem to consider herself as a person participating in the world as much as an observer who develops the ability to gently guide the lives of others. She doesn’t register the minor tragedies of her life or, at least, she doesn’t register them in a conscious way and because we see the story through her eyes, the sadness of it seems less significant than the joy.

Tautou’s performance as Amelie made her a star on both sides of the Atlantic and it remains absolutely winning nearly a decade later. She manages to make Amelie a person of simple pleasures without ever making her seem stupid or naive, and she hints at Amelie’s deeper anxieties without allowing them to overshadow the character. She is also completely and utterly charming – if you can watch this movie and not just adore her as Amelie, then you are a far stronger person than I. She makes it look effortless but the truth is that she carries this movie on her shoulders with a rarely seen grace. It is a pitch perfect performance in a movie that is itself pretty damn perfect.

I can watch this over and over, never gets old!

to tie this in with my other comment. xD Amelie is totally a foreign rom-com, and it's really good. I can watch this over and still smile and root for Amelie Poulain xD

See, nothing wrong with chick flicks~

One of the few chick flicks that I can stand. Besides being impressed by the cinematography, I was just struck by the positivity of Amélie's attitude towards life.