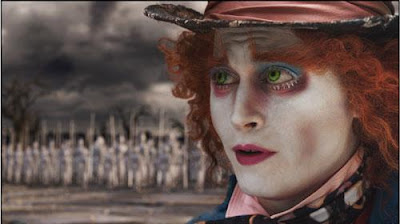 Oh, man. I'd been looking forward to Alice In Wonderland for months and even after reading a few less than favourable reviews, I still held out hope. I was prepared to be a bit disappointed in Tim Burton's rendering of the classic story, but instead I find myself feeling apathetic. I've tried to start this review about a dozen times over the past couple of days but when I try to articulate my feelings about this movie all I can think is... *shrug*.

After a brief prologue in which we meet the young Alice, haunted by memories of Wonderland which she believes to be nothing more than dreams, the film flashes forward 13 years to the teenage Alice (Mia Wasikowska), who is on the verge of being married off to a less than desirable (from her perspective) suitor. She flees from his proposal and, chasing after a rabbit, falls down a hole where she enters a strange new world. There she meets a wide variety of characters who are willing to acknowledge that she's an Alice but are convinced that she's not the Alice. Meanwhile, she's convinced that it's just a dream, despite all painful evidence to the contrary.

Alice's return is of interest to both the benevolent White Queen (Anne Hathaway), who needs her to slay the Jabberwocky, and the tantrum prone Red Queen (Helena Bonham Carter), who wants to cut off her head because cutting off heads is her favourite past time. When the Mad Hatter (Johnny Depp) is taken prisoner by the Red Queen, Alice infiltrates the palace as Um from Umbradge in order to rescue him. While she fails at this, she does manage to get the vorpal sword, the only thing that can kill the Jabberwocky, and escape with it back to the White Queen's palace, setting the stage for the great and final battle between good and evil.

The film plays fast and loose with Lewis Carroll's Alice's Adventures in Wonderland and Through the Looking-Glass, and What Alice Found There, taking elements from both stories without strictly adhering to either. The film also tries to incorporate a bit of feminism to guide its narrative arc, essentially making the story about how Alice learns to stand up for herself. This element both does and doesn't work. As nice as it is to see a film about a heroic female lead, particularly one that emphasizes the importance of her making her own choices rather than blindly following a script imposed on her by outside forces, Alice's moment of triumph at the film's end is somewhat lacking in impact because she holds a position of disadvantaged advantage in society. She's disadvantaged because she's a woman but her class and wealth make it possible for her to take a defiant stance that a woman of lesser means wouldn't be able to afford. The last scenes are less "score one for womankind" than "score one for rich women" - it's nice for Alice, but kind of empty in the greater scheme of things. Not that I expected Alice to be a political symbol, but if the film is going to play at rooting itself in certain politics, it should do so in a less shallow, more nuanced way. And I don't even want to get into the ideological implications of the war between the Red Queen and White Queen and the ways that that undercuts what the film is trying to do through Alice.

There are things about Alice In Wonderland that I liked - anything involving the Chesire Cat, Depp's melancholic Hatter, Tweedledee and Tweeldedum - but ultimately I found the film so unrelentingly dour that it was hard to enjoy. I didn't expect it to be happy and peppy (this is Tim Burton, after all) but I did think it would be a bit more, I don't know, magical. There seems to be no joy to this particular cinematic exercise which leaves the product rather hollow.

Exactly how I felt about it. The movie feels cold and distant, it has no warmth to it, even the main character, Alice, I couldnt warm up to her, I dont feel I really connected with her. But its probably because Burton didnt make enough of an effort to make a memorable character.

And still the movie makes kajillions at the theater!

i still wanna see this film. but i have been seeing some mixed reviews on it. and everyone says the chessire cat is the best thing going.

Yep, "shrug" about sums it up for me as well. It had some really dynamite characters, like Stephen Fry's Cheshire Cat, Anne Hathaway's White Queen and Helena Bonham Carter's Red Queen, but their parts were so small. And the less interesting characters, like Johnny Depp's loony-but-not-in-an-endearing-way Mad Hatter, got so much screentime. Meh.

I really didn't enjoy watching this film. I thought the movie was predictable and too linear. When i remember watching alice in wonderland movies, i have no idea what will happen and why. this movie, there was nothing new, nothing original just alice and all the same characters back. Not to mention, watch the queen of hearts cgi or costume was badly done.

If you feel as if cursed with weak praise, it was not my intention. It is wonderful for two hours it takes to speed before you, but I just want to be clear - nothing that happens in the ear or the heart still fairly consistent with what happens in the eye.

Its nothing original just Alice and all the same characters left. Not to mention seeing the queen of heart costumes or CGI was poorly done.

I have no idea what will happen and why. this movie, there was nothing new, nothing original just alice and all the same characters back.