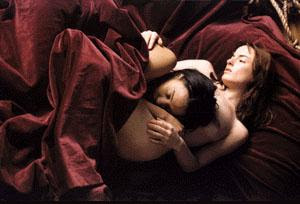 This is a film that I really like even though I know that objectively, it falls just short of being good. It’s well-acted and gracefully directed, but the content just doesn’t quite measure up, resulting in the good stuff being dragged down by the bad stuff. However, there’s enough good stuff that I never notice the bad while I’m watching, and only tend to think about it afterwards.

The film centers on Camille (Bussieres), a professor of mythology at a Christian university. She's engaged to Martin (Czerney), and one day meets Petra (Crawford) in a laundromat. Later, she discovers that their clothes have been switched (not accidentally, as we know, though Camille does not), and soon Petra is pursuing Camille, who pushes her away with one hand while pulling her closer with the other.

One of the things I like about the film is that it actively engages with religious ideas. Camille’s conflict isn’t “am I gay or am I straight?” as it is in a lot of similar films; her conflict is in trying to find a balance between what she feels for Petra, and the religious ideals that she’s always held. This aspect of the story rests heavily on the scenes between Camille and Reverend DeBoer (Fox), a character I always find myself wishing that we got to see just a little bit more of. He’s not your typical depiction of Christian authority. He disapproves of Camille’s relationship with Petra, but he doesn’t denounce her for it. There’s some slight suggestion that Reverend DeBoer himself might be gay. “People like you” is a phrase that is said twice in the film. The first time is at the beginning of the film, when Camille asks Petra if “people like [her] have friends.” The second time is towards the end, when Revered DeBoer tells Camille that maybe the Church has been unfair to “people like [her].” Is he just more liberal than his post would suggest, or is he so gentle and understanding with her because he really does understand where she’s coming from with regards to her feelings and her religion?

Aside from religious issues, there are also issues of race. Petra is black, Camille is white. This fact never arises between them, nor is it commented on by other characters in the film. On the one hand, this is good because the interracial aspect of their relationship shouldn’t be a big deal. However, subtextually there is some commentary on this aspect of their relationship which is troubling. Petra is a circus performer, a fact which has negative connotations all around. The chemistry between the two actress – and, for that matter, between their characters – is strong enough that it’s unnecessary to exoticize Petra in this way. Also troubling is a scene where DeBoer finds Petra and Camille together and Camille describes Petra as “a street kid.” Petra is no more a kid than Camille, and certainly doesn’t look like a street person. There are any number of ways that Camille could have explained Petra’s presence in her apartment, and the fact that her mind went straight to “street kid” is telling about how deeply she feels that this relationship is taboo.

The chemistry between the two actresses is very good, and so is the development of their two characters. In the beginning, Camille is tentative and guarded, and then begins to let go and open up. Petra when she’s in pursuit of Camille is quite aggressive (not in a bad way, just in a way that her intentions are quite clear), but becomes more guarded as the relationship progresses, afraid that she’s allowed herself to feel too much for Camille when there’s a chance that Camille might stay with Martin. The ways in which they dance towards and away from each other ring very true, though the film lets us know fairly early that there will be a happy ending for Camille and Petra. Consider the two sex scenes, one between Camille and Martin, the other between Camille and Petra. The scene with Martin takes place in the dark, and the sex is energetic but emotionless, and we know that Camille is thinking of Petra. The scene with Petra takes place in the light, is softer and slower, and intercut with shots of two gymnasts performing a high-wire act (as an aside I must admit that seeing the film again recently I was distracted during this scene by the realization that Rachael Crawford must have had a “no nipples” clause in her contract, given the lengths the film goes to not to show them). Camille’s connection to Petra runs far deeper and we know, even if Petra doesn’t, that Camille will choose her.

There are a lot of things about this movie that I feel I can defend, but there’s one thing that occurs at the end that always takes me right out of the movie. Camille’s dog dies at the beginning of the story. At the end, after she’s buried him in the woods, he crawls out of his grave and takes off running. The film begins with Camille giving a lecture on the mythological trope of humans transforming into animals and vice versa. It ends with Camille running away with Petra (and the circus), and the dog running away to… wherever. You could argue that this scene is symbolic of Camille breaking free, that the dead dog coming back to life is symbolic of Camille’s soul or something, but even as symbolism, the scene seems misplaced.

That being said, this is a film that is very watchable from start to finish, and one that stands up against multiple viewings despite it’s problems.

Posted by Norma Desmond at 6:40 PM

I always had a crazy idea regarding the ending.

It is very unlikely that a dead dog comes back to life when he has died.

Does this mean the "Happy Ending" that we see is also unlikely?

Maybe she isn't rescued when she freezes to death.

I always had a crazy idea regarding the ending.

It is very unlikely that a dead dog comes back to life when he has died.

Does this mean the "Happy Ending" that we see is also unlikely?

Maybe she isn't rescued when she freezes to death.