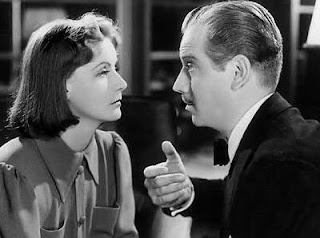 Ninotchka, Garbo’s first forray into romantic comedy (the second, and last, was the disasterous Two Faced Woman, her final film), was advertised with the tagline, “Garbo Laughs!” as if the act of laughing was unusual for her. The fact is, Garbo laughed in all of her films, even in tragedies like Camille and Anna Karenina. But this is the first time she made us laugh and it was the first time she was able to demonstrate her considerable comic timing. This is a terrific film, easily the lightest and happiest of any Garbo ever made.

There are two Ninotchkas in the film. The first is the Ninotchka who is sent by the Soviet Union to Paris. She’s cold and analytical (she’s like a Garbot, and I mean that in the most complimentary way) and has no use for frivolity, only function. The second Ninotchka, the one who returns to the Soviet Union from Paris, is warmer, more human, still able to distinguish the silly from the serious, but finally able to embrace it. The transition is officially marked by the purchase of a hat. On seeing it for the first time, Ninotchka shakes her head in dismay, declaring that any society that would allow women to wear hats like it are not long for this world. Later, after having fallen in love and had some fun, we find out that she’s bought the hat. She tries it on and looks happy. And then she looks sad because she knows that after her experiences in Paris, she’ll never be able to look at her life in the Soviet Union the same way again.

The film is a little strange in terms of how it views the Soviet Union, given that it was made well before the Cold War and the McCarthy era, and at a time when the West was still somewhat enamoured with socialist ideas. When Ninotchka arrives, she informs her comrades of the success of the latest purge, stating that “there will be fewer, but better Russians.” The film doesn’t shy away from coming right out and expressing a critical view of the brutal conditions under Stalin, although it couches these criticisms in comedy.

This is a very funny film, two sequences in particular. The first involves Count D’Algout (Douglas) trying to make Ninotchka laugh. He tries to tell her a series of jokes, which she dismantles by asking questions (for example, “Two men are going to America…” “On what boat?”). He quickly becomes frustrated and finally says, “Maybe the problem isn’t with the joke, maybe it’s with you.” Ninotchka, ever so detached, doesn’t even look at him as she replies, “I don’t think so.” Garbo and Douglas both play this scene perfectly as he attempts to charm her, each attempt seeming to make her more immune to him than the last. Finally D’Algout gives up, leans back in his chair and falls to the floor. When he looks up, he realizes that he’s made Ninotchka laugh. It’s a fantastic scene.

The second sequences comes shortly thereafter. D’Algout and Ninotchka go out and she drinks champagne for the first time. She excuses herself to go to the ladies room and a moment later the manager approaches D’Algout to inform him that they’ll have to leave because Ninotchka is making a drunken speech, urging the powder room staff to go on strike. D’Algout takes her back to her hotel, they drink more champagne. “When I kissed you,” she tells him, “I betrayed a Russian ideal. I should be stood up against the wall.” He agrees. He stands her up against the wall and blindfolds her. He crosses back to the other side of the room and pops the cork in another bottle of champagne. She falls to the floor, “executed.” The timing in this scene is perfect and it only gets better as they carry on to drunkenly search the room for a radio.

Of all Garbo’s on-screen love interests, Melvyn Douglas is hands down my favourite. He’s such a ridiculously underrated actor, so skilled and versatile (if you need proof, watch Ninotchka and, say, Hud back-to-back) and he plays off of Garbo so well, complementing her rather than attempting to upstage her. Neither is really the straight man or the funny one; they’re both funny, but they approach comedy in such different ways, Douglas swaggering towards it charmingly, and Garbo sneaking up on it, making it funny by seeming to take it so seriously.

This is one of those comedies that you can watch over and over again without it getting stale. It remains funny and absolutely charming with each viewing. The 1930s were a great period in Hollywood for comedies (the great period, in my opinion), and this film deserves to be considered one of the decade’s best.

Posted by Norma Desmond at 6:09 PM