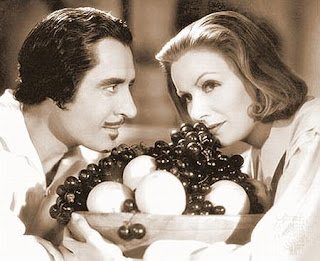 Forget anything you know about Swedish history or the historical Queen Christina. This isn’t a film of historical truths, it’s an excuse to cast Garbo as a Queen and play with the androgynous aspects of her persona. Like Grand Hotel which was made the year before, it echoes Garbo’s personal love/hate relationship with fame and celebrity, but expands on it so that we get a more complete view. It is also, arguably, the film in which Garbo is most lovingly photographed. She looked gorgeous in all her films, but here the cinematography seems especially attuned to her beauty.

The best thing about Queen Christina, aside from Garbo and the cinematography, is that it was made on the right side of the Hays code. Although the code was adopted in 1930, it didn’t become strenuously enforced until 1934, the year after this film’s release. If the film had been released one year later, certain aspects, suggestions and scenes would have been cut or made more ambiguous, so the timing of the film is fortunate because those things that may have been censored help to highlight the duality of the character and her portrayer.

The film plays on Garbo’s sexual appeal to men, as well as the androgynous nature of her looks and sexuality. There is a scene early in the film where Christina greets one her ladies in waiting with a kiss on the lips. They proceed to have a conversation which casts Christina as the loving, but busy, husband and her lady as the adored but neglected wife who complains that they never have time together anymore. There’s never any explicit statement that the two are lovers, but there is the suggestion that the relationship runs deeper than friendship. The balance of power that’s displayed in their scenes together certainly suggests two women who have adopted a marriage-like relationship.

The scenes between Christina and Don Antonio (Gilbert) further develop the dual nature of Christina/Garbo’s sexuality. When they meet she’s dressed as a man and Antonio mistakes her for one (this the part of the film where you really have to suspend your disbelief because though Garbo might carry herself like a man, she certainly never looks like one). He discovers his mistake only after fate has caused them to seek shelter in the same inn where a shortage of rooms leads to them sharing. They spend the night together and what follows is one of the most captivating moments ever captured on screen – when Christina floats around the room, caressing various objects. She’s “memorizing” it, she tells Antonio (“In the future, in my memory, I shall live a great deal in this room.”). The night spent with Antonio is a turning point in the film not just in terms of the plot, but also subtextually. Prior to this scene, Christina is always garbed in pants. She concerns herself with the running of her empire (which she technically rules under the title of King, despite the film’s title), her love interest is her lady in waiting (there is also, during the time spent at the inn, a scene where a girl has been provided by the inn to keep Christina - whom the innkeeper has also mistaken for a man - company. Christina dismisses her but… would she have were Antonio not there?), and she boasts (again, as the man people keep mistaking her for) that Queen Christina has had twelve lovers in the past year. After the night with Antonio - with the exception of a brief scene at the end where she dons pants to go out riding – we see her only in dresses, her primary concerns become matters of love rather than matters of state, and she tells Antonio that she was lying about the twelve lovers. She essentially becomes a more “traditional” woman through her relationship with Antonio.

The main theme of the film seems especially prescient today, not only when considering Garbo but when considering celebrity culture in general. The film is primarily concerned not with Christina’s relationship with Antonio, but with a public figure’s relationship to the public. In the film, the relationship between Christina and Antonio is hotly debated amongst the populace, nearly inciting a riot. Christina gives a couple of speeches through which she declares that her private life belongs to herself and expresses her refusal to have her life dictated to her by popular demand. In theses speeches you can hear echoes of Garbo herself, and in the frenzy that arises from the people, you can see a commentary on the celebrity culture that has not only continued, but intensified, since the film was made. The peasants storming the palace might seem melodramatic, but it’s really only a literal vision of what we’ve seen figuratively in the past few years. Consider, for instance, the public outcry over Prince Charles’ relationship with Camilla Parker-Bowles and the suggestions boarding on demand that he be passed over in succession because of it. Consider also the hysteria surrounding the relationship of Brad Pitt and Angelina Jolie. It seems silly but it is the sort of thing that matters to some people, and it is something that people can be easily worked up over.

This is a very good film, made so perhaps by the extent to which Garbo seems comfortable in the role. It has almost nothing to do with the historical Queen Christina (who, by most accounts, was not a beloved ruler), but that’s not the point. The historical setting is used as a metaphor for the culture contemporaneous with the making of the film, a culture which has carried on and deepened in it’s “importance” to people’s lives, which is perhaps how the film still seems fresh over 70 years later.