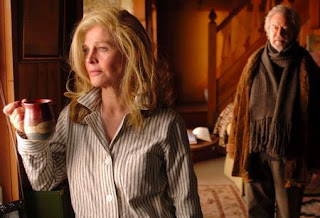 This is quite simply a fantastic film, and one that treats its characters with a lot more respect than the vast majority of films. Consider how often characters in their sixties are allowed to be the focal point of films, and consider also that though those characters may be allowed to be in love, rarely is enough consideration given them that they’re allowed to feel lust. This is a story that knows that life carries on beyond the age of forty and that feelings don’t become fossilized and forgotten and die away in later age. That the film is guided by the hand of a 27-year-old director is astounding.

The film is adapted from a short story by Alice Munro called The Bear Came Over The Mountain and is true to the original without relying on viewer’s having read it to provide depth to the film. The movie is very carefully paced, allowing us to get to know the characters and get some sense of the history that exists between them. The film also makes excellent use of the surrounding landscape, using it to complement the development of the story and the characters. Most of the film takes place during the winter, literally taking place around Christmas time, and figuratively taking place during the winter of Fiona (Christie) and Grant’s (Pinsent) life together. There are moments when the landscape is so vast and blank with snow that we get a sense of the loneliness that these two people, torn apart from each other by nature, must be feeling.

This is a film without pretence. It doesn’t pretend that a marriage that has survived for some forty years has done so easily or without obstacles. It is established fairly early that Grant used to have a roving eye, that Fiona forgave him and they managed to make the marriage work afterwards – which, of course, doesn’t mean that the business was ever forgotten. After Fiona is checked into a care facility and develops an attachment to another patient, Grant wonders if perhaps she’s just playing a game with him, punishing him for the affairs that he had in the past. Later, in a conversation with a nurse who has become a confidante, he remarks that in spite of their problems, things were never that bad. She replies (in what is one of the best scenes in the film) that in her experience, it’s always the husbands who think things were never that bad, and wonders if the wives would agree.

The performances in the film are excellent across the board. Olympia Dukakis, as the wife of the patient Fiona develops a relationship with, brings a wonderful mixture of stability and fragility to her character. There’s a scene where she leaves a message on Grant's machine, asking him out on what is officially not a date, even though it kind of is a date, and then sits alone in her kitchen waiting for him to call her back. Her loneliness is tangible, and Dukakis plays it without vanity. She has no illusions about her life or the potential of a relationship with Grant. She’s informed by a lifetime of experience, and she’s entering on this new adventure with clear eyes. It’s a brave performance, playing as she does a character who could easily veer into being pathetic, but never does. Dukakis brings a solidity to her that helps ground the film.

Christie is wonderful as Fiona, and absolutely deserves all the praise she’s gotten. There are scenes where she doesn’t speak, but simply looks at her surroundings and we sense her grasping for understanding even as she disappears deeper and deeper into herself. The performance is never showy and never rings false. However, for me, it’s Pinsent who really carries the film. He spends much of the film in denial – convinced that she’s just forgetful, convinced that she’ll only be in the care facility for a short time, convinced that she’ll get better – and then slowly comes to accept things for being the way that they are. We know that he’s behaved badly in his marriage, but we also believe that he cares about Fiona’s happiness. When he first approaches the Dukakis character at the beginning of the film, we think maybe that he’s come to ask her to remove her husband from the facility. Later, we find that she’s already done that and Grant has come to request that she put him back in, because Fiona is depressed without his company. Grant is jealous of the relationship, but willing to encourage it if it will help keep Fiona from getting sicker. Like Christie, Pinsent never rings a false note and it’s a shame that he’s been largely ignored in favour of his co-star.

This really is a great character film, one in which people are allowed to speak and interact with each other in ways that feel utterly natural. The acting is great and the direction is solid and sure-footed. Polley will have a lot to live up to, should she decide to step behind the camera again. Here’s hoping that she does.

Posted by Norma Desmond at 3:17 PM