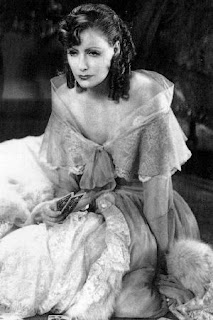 This is a fantastic adaptation. It remains relatively true to the novel on which it is based (Anna’s child with Vronsky is absent, and the Levin-Kitty relationship is reduced to a few scenes and hardly missed), retaining the elements of plot and character which make the novel so compelling and which, here, makes Garbo’s performance so very compelling as well.

The film begins by establishing Vronsky (March) as a man’s man who is firmly entrenched in army life. When he goes to the train station to meet his mother, he comes face to face with Anna Karenina who is introduced in the greatest of all Garbo’s entrances (perhaps one of the great film entrances ever), as she emerges through the steam coming off the train. It’s love at first sight for Vronsky, though Anna attempts, at first, to keep him at arm’s length, steering him towards Kitty until he makes it clear that it’s of no use; he’ll pursue her no matter how fruitless. Of course, it isn’t fruitless at all. Anna is in a cold, sterile marriage made tolerable only by the presence of her son.

The main conflict of the film, as in the novel, isn’t Anna’s choice between her husband and her lover – that’s the stuff of routine. The thing that has always set this story apart is that Anna must choose between her son and her lover, between one kind of happiness and another. That she can bring herself to choose Vronsky is what makes her one of the more complex figures of fiction. That she comes later to realize her mistake, and knows that it cannot be undone, only adds to that complexity.

Garbo is excellent as Anna, a role she was perhaps born to play. It’s strange to think, seeing how well she plays off the actor portraying her son, that she not only didn’t have children in real life, but didn’t interact with many on film either. Her inner turmoil is effectively conveyed. She adores her son and when she’s away from him, she aches from the separation. But, when she’s away from Vronsky, she longs to be with him. Her situation is impossible. She knows it. We know it. The other characters know it. And yet it remains absorbing. One of the best scenes in the film finds Anna at a fountain in her garden. Vronsky approaches through an ivy covered archway. He pleads with her to leave with him and then storms off when she refuses. She follows him to the end of the archway, where he has disappeared off screen to the right. Off screen but to the left, Sergei calls to Anna. She stands there for a moment, looking to the right, and to the left. She’s absolutely trapped, either choice bound to lead in one way to her unhappiness.

It must be admitted that Garbo and March don’t have the best chemistry. Whatever we might feel for that relationship must be supplied largely from our memories of the novel, and if you haven’t read the novel, you may find yourself at a loss to understand how Anna can leave her son to run off to Italy with Vronsky. However, it’s Garbo’s performance that really makes this movie. She manages to convey the conflicting emotions inherent in the character. We feel for her, even if we don’t necessarily care for the central romance.

A large part of what makes this film work, aside from Garbo herself, is that like the novel, it explores the double standards that seem naturally to apply to women of Anna’s wealth social position. Anna, once she leaves with Vronsky, is lost forever. Vronsky, of course, can always return to polite society. He can leave Anna, marry another woman, and be accepted back into the society that shuns him while he’s with her. Anna’s brother can philander and then turn around and tell Anna that she’s wrong to engage with Vronsky and destroy the harmony of her family. It isn't the act of sex that makes Anna irredeemable, it's the fact of her sex; and her knowledge that she’s unsalvageable, that she’s trapped no matter what choice she makes, is part of what makes her so fascinating.

Posted by Norma Desmond at 5:07 PM