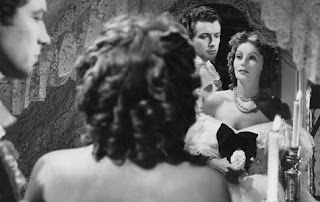 Of all the films she made, this one was Garbo’s favourite. It is at once a melodrama (it was jokingly referred to with the line, “Garbo Coughs!” – a parody of the tagline from Anna Christie: “Garbo Talks!”), a great romance, and a cynical look at the perilous position that women can have in high society. Director George Cukor juggles all these pieces effortlessly and Garbo shines in the role, for which she received an Oscar nomination (she was previously nominated for Anna Christie and would be nominated again for Ninotchka).

Garbo plays Marguerite Gautier, a 19th Century Parisian courtesan who lives for pleasure even as she’s dying of a terminal illness. At the theatre one evening she meets the Baron de Varville (Daniell) by design, and love struck Armand Duval (Taylor) by chance. Armand and Marguerite are instantly smitten with each other, but the Baron’s wealth and position prove more tempting and she becomes his mistress. Months pass before Armand and Marguerite come back into each other’s orbit. He eventually talks her into spending the summer in the country with him, arguing that it will be good for her health. She agrees and for a time they’re happy, until Armand’s father (Barrymore) pays her a visit, imploring her to let his son go. The love scenes between Armand and Marguerite may be the soul of the film, but the scenes between Marguerite and Mr. Duvall are the heart of the matter. Marguerite’s reputation is well known. Mr. Duval worries that because of her his son’s reputation will be tarnished, though Marguerite points out to him that “a man can always go back,” meaning of course that only women, never men, forever fall from grace through illicit affairs. Nonetheless, Marguerite agrees to give up Armand, and pushes him away as brutally and heartlessly as she can. The next time they meet, she is once more with de Varville, only this time her need of money has made her entirely submissive to him and he treats her badly because he knows that he can, that she has no choice but to let him. A duel between de Varville and Armand ensues, Armand is exiled for a period of months and returns in time for Marguerite to die.

The film makes no secret of its opinion with regards to the people Marguerite associates with. They’re vain and silly, they degrade Marguerite behind her back and then manipulate her good nature in order to get money and other goods from her (her friend/rival Olympe uses Marguerite’s dire financial straits to buy her jewellery from her cheaply, and then goes to the theatre to show it off and brag about the bargain she made). Her “friends” only care about her when they can get something from her – she knows this, but thinks she deserves them (“I’m no better than they are”). They hardly seem to notice when she’s dying, still manipulating her out of money and jewels even as she’s on her deathbed. Only Armand truly cares for her.

This is one of Garbo’s better screen romances. Taylor is perfectly cast as the handsome, inexperienced younger lover, and Garbo finds the right balance in Marguerite’s conflicting feelings for Armand. At first she keeps him at arm’s length, protecting him from his romantic idealism. But his attention flatters her and she lets her guard down and allows herself to fall in love with him. Certainly she’s known more worldly men, men of greater stature and wealth and experience; but it’s Armand’s innocence that attracts her. He has a youthful, romanticized view of the world in which her past, and his relative poverty don’t matter, the only thing that matters is their love. Marguerite knows that this line of thinking isn’t practical and that his promises of eternal love are perhaps short-sighted (in her confrontation with Mr. Duval he points out to her that in these situations the man always grows up and leaves the woman “worse than she was before”), but she wants so badly to believe in the possibility of being loved. And, besides, despite frequent claims that she’s just a little bit sick and bound to get better, she knows that she doesn’t have long to live. The final scene, when Marguerite dies in Duval’s arms while he talks about the future they’ll have together, is one of the greatest screen deaths ever filmed.

Garbo is simply wonderful here. The whole film, in fact, is wonderful. This is a story that could so easily have gone over the top and look dated and mannered today, but instead it rises above the trappings of its genre and stands apart as something worth looking at.