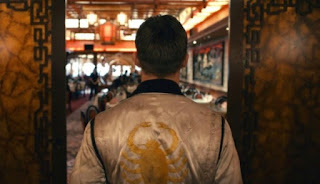 #80: Drive (2011)
He's a man of few words who's just there to get a job done. There's nothing new in the movies about that and yet Drive never feels derivative; it feels vital and alive and like it's doing something different, even when it's not. Starring Ryan Gosling as the Driver (no name needed), stuntman by day, getaway driver by night, and Carey Mulligan as the woman who briefly brings a patch of light into the darkness of his existence, Drive is as relentlessly violent as it is dreamily romantic, a seemingly dysfunctional combination that filmmaker Nicolas Winding Refn finds a way to bring together in harmony. A film with style to burn - it's not just a dynamic looking film, but one that moves to its own particular beats - it's a work of restrained emotions that might feel artificial were it not for the way that Refn, Gosling, and Mulligan are able to suggest the wellspring of emotion hiding just beneath the surface. It's a work as beautiful as it is brutal. 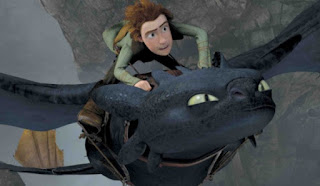 #79: How to Train Your Dragon (2010)
Easily one of the most beautifully animated films of the last ten years, How to Train Your Dragon is also one of the most moving. Although the story itself is somewhat conventional - it's your basic coming-of-age adventure where a "regular" boy finds a way to use the skills he has to do something extraordinary - it succeeds in transcending its genre trappings by focusing on the central relationship. That relationship is between a young Viking (voiced by Jay Baruchel, doing wonderful work) and a wounded dragon (beautifully conceived so that even though he's non-verbal, he can communicate through body language), neither of whom can bring himself to kill the other despite having been taught that they're supposed to do just that. Instead they become friends and allies, each coming to the other's aid when needed, and their loyalty to each other changes everyone around them. It's geared towards children, but it's a film that speaks to all ages, soaring majestically on screen and in the imagination. 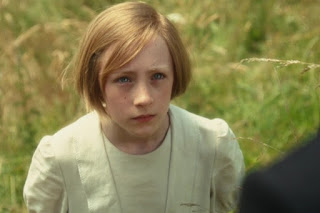 #78: Atonement (2007)
You can rewrite a story, but you can't change the past. Such is the torment of the protagonist of Atonement, an aspiring writer who witnesses just enough in isolation to draw the fragments together to tell a story that ends up ruining several lives, having not paused to consider the potential consequences of the story she's telling. Decades later she writes the story down, a more truthful version this time, but when it comes to the end she must reckon with how this retelling will always come up short. There's no changing what happened and that profound sense of regret and guilt permeates everything. The bulk of the film, the story that she's recreating, is structured as an allegorical retelling of the Passion of Jesus, set during the period just before the outbreak of World War II and then right in the thick of the war's early days. This is all skillfully unfolded by director Joe Wright, who brings his usual inventiveness to the project in order to make a film that tells itself visually just as well as it tells itself narratively. The film's stop at the beaches of Dunkirk remains one of the single greatest technical achievements of the last ten years of cinema. 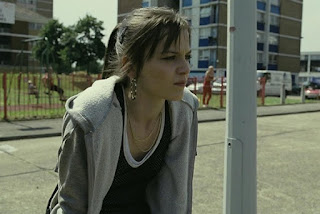 #77: Fish Tank (2009)
The protagonist of Fish Tank is a teenage girl seemingly driven by anger (star Katie Jarvis was cast after being seen fighting with her boyfriend at a train station). Really, though, what drives her is a deep feeling of insecurity and a longing for someone to care about her which just expresses itself as anger. Michael Fassbender co-stars, in a pre-stardom performance of seductive wolfishness, as the boyfriend of her mother, a man who shatters her illusions first by taking her to bed and then through her discovery of a secret he’s been keeping. What follows is a reckless attempt at vengeance which plays out in a way that demonstrates Arnold’s keen understanding of the impulsive, leap without looking, mindset of many people who possess the physical capacity to do adult things but do not yet have the mental capacity to fully understand the lasting impact of their actions. It’s a brilliant and totally engrossing character study about a young woman ruled by her emotions and the cycle of poverty and neglect that she may be destined to perpetuate. 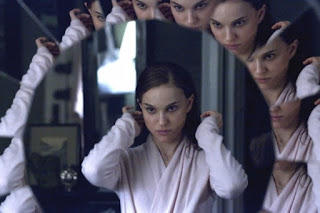 #76: Black Swan (2010)
Darren Aronofsky might not get any points for subtlety in Black Swan, but that doesn't make it any less effective as a film. Outwardly a psychological horror movie, inwardly a story about a woman torn apart by her repressed sexuality, it has always struck me that this is a story about the power of internalized homophobia. It centers on a woman who is so infantalized by her overbearing mother that she hasn't had the opportunity or space to mature sexually, making her perfect to play the part of the innocent White Swan, and who finds herself alternately drawn to and repulsed by a woman who embodies the raw sexuality necessary to take on the role of the Black Swan. As she pushes herself to get past her hangups, she has visions of body horror, transformations which suggest the impossibility of denying one's true nature as she literally becomes the Black Swan - the part of her that has been repressed and which overpowers her once it's allowed out. Anchored by a performance from Natalie Portman that's like an exposed nerve, Black Swan is a fascinating, dazzling, and unforgettable film. 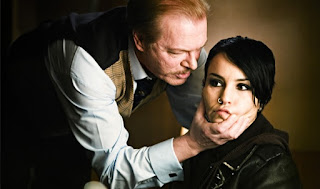 #75: The Girl with the Dragon Tattoo (2009)
The Swedish title is "Men Who Hate Women," which is a more direct description of what the story is about, but doesn't capture what makes it special. It's Lisbeth Salander, possessor of the dragon tattoo and played by Noomi Rapace (launching her into crossover success, even if her English language films have never provided her with a character nearly as intriguing), that makes this more than a conventional crime thriller. An unrelentingly savage movie about violence, but in particular about violence against women, the film finds a way to be witness rather than voyeur, to plant itself firmly in the point of view of a woman who has been victimized by hateful men and by the society that nurtures that hatred at an institutional level, to be about misogyny without being misogynistic itself. Directed by Niels Arden Opley, The Girl with the Dragon Tattoo plays like a gut punch, stripping away the pleasures that can be had in a lurid murder mystery story and exposing the dark societal underbelly which give such stories their roots. 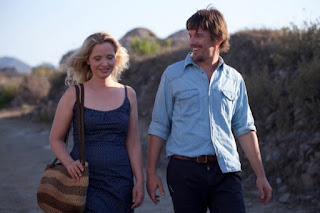 #74: Before Midnight (2013)
Nothing can be more perfect than what remains unrequited because it exists in a perpetual state of "What if?" It can remain a romantic ideal because it hasn't been intruded upon by reality, by all the little things and all the big things that can destroy a relationship. The first two films in the Before series are stories of "what if?" which leave the central relationship undefined - it at once is and is not, they are at once together and not. Before Midnight answers the question, showing a relationship that no longer exists as a romantic ideal, but as a sometimes painful reality. The love story is still there, but the edges are sharper, the banter between the two lovers a little thornier and a little more rooted in the resentments that have built up over the years. Ethan Hawke and Julie Delpy are in fine form, playing what have arguably become their signature roles, and director Richard Linklater makes it all look effortless as he draws one of cinema's most unlikely franchises to what seems to be its conclusion. 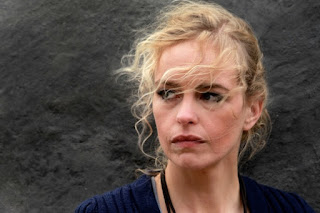 #73: Barbara (2012)
"She won't be even one second too early. She's like that." When you live under the thumb of a repressive dictatorship, you strike back where you can. The title character, a doctor played with flinty precision by Nina Hoss, is biding her time and waiting for her opportunity to escape from East Germany even as she lives under constant surveillance by the Stasi, who make periodic visits to perform thorough searches of her home and invasive strip searches meant to impress upon her that everything, even her own body, belongs to the state. As the story progresses she finds herself divided between her desire to escape and her duty to her patients, one of whom is suffering even more than she is at the hands of the state, and involved with a man who is himself divided by how drawn he is to Barbara and by the decision he's made to be a collaborator. Barbara makes plenty of room for complexity and complication and grows into a deeply affecting film about people living constantly on edge, knowing that the walls are closing in on them. 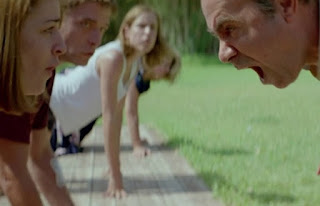 #72: Dogtooth (2009)
I feel confident in saying that you will never see another movie quite like Dogtooth. A political polemic disguised as a grotesque family drama, Yorgos Lanthimos' film is about iron-fisted authority, blind adherence to it and rebellion against it, and about how the institution goes about protecting itself from being undermined and destroyed. It is a deeply bizarre film about how a minority population (figured here as the parents of a family, standing in for the government) controls a majority population (figured here as the children of a family, standing in as the people) through the manipulation of language and the use of fear and violence in order to maintain the status quo and preserve the balance of power. It is bold and challenging and fearless, unpleasant on many occasions but also so mesmerizing and complete in its vision that you're never left in any doubt that you're watching a masterpiece. 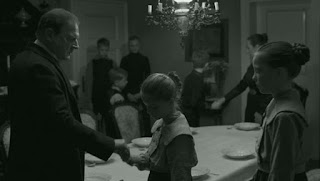 #71: The White Ribbon (2009)
In 1913, in a German village that still exists in a semi-feudal state, strange things begin to happen that leave its inhabitants feeling confused and terrified. No one quite seems to know what's going on, but the schoolteacher suspects that it's all the doing of children, who seem to have developed a pack hierarchy and mentality. The word "Nazi" is never spoken, but the film is very much concerned with the tangle of societal ills and the global upheaval of the coming world war that would make way for the rise of National Socialism, and it creates a feeling of foreboding and unrest by being deliberately obscure and refusing to give solid answers. Michael Haneke has never been particularly concerned with making his audience feel comfortable - to watch one of his films is to be in a constant state of waiting for the shoe to drop - and The White Ribbon is no exception, instilling an inescapable feeling of menace as it digs deep into the past to try to explain the inexplicable.
Posted by Norma Desmond at 8:00 AM