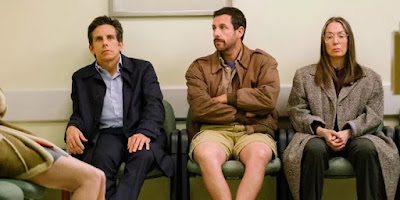 The last week and a half has been a pretty horrifying one in terms of the barrage of sexual harassment (and assault and rape) stories that have come out of Hollywood. It's been so depressing that on Friday I was very much looking forward to watching Noah Baumbach's new comedy, The Meyerowitz Stories (New and Selected), just for a bit of escapism and to have a few good laughs. I did, in fact, have several good laughs while watching it, but then mid-way through the movie one of the female characters tells a story about how when she was a teenager she went swimming and then afterwards was rinsing herself off in an outdoor shower only to turn around and discover one of her father's friends watching her while masturbating and it was like, "Is there no escape from these stories?" This isn't in any way to suggest that we shouldn't be paying attention to these stories and demanding better behavior from those who are privileged to wield power; it's just that it would have been nice to experience 2 solid hours without being confronted with a story about a dude luxuriating in garbage behavior towards a woman just because he feels that his penis entitles him to it. The Meyerwotiz Stories is a good movie, by the way, but God.

I tend to dislike it when movies and TV series are described as being novelistic, but The Meyerowitz Stories can hardly be described in any other way as it makes no secret of its novel-like approach from its full title, which suggests a short story collection, to the chapter-like design of its storytelling, complete with a sentence of written explanation providing context before moving into the scene. The story, naturally, is about the Meyerowitz family, specifically about the relationship of the Meyerowitz patriarch, Harold (Dustin Hoffman), and his relationships with his sons, Danny (Adam Sandler) and Matthew (Ben Stiller). Harold also has a daughter, Jean (Elizabeth Marvel), but there's less angst in their relationship than there is in his relationships with Danny and Matthew, largely because she seems to have accepted that he's kind of terrible and has made her peace with it, whereas Danny and Matthew have a more difficult time working through their feelings because of the ways that they fear they're like the man who sired them but didn't spend much time raising them.

Harold is a sculptor of some repute, though not nearly as much as he would like. He's pretentious and jealous of the success of his contemporaries and spends the entire movie engaged in what feels like a barely broken monologue as if he's dictating a book about himself to an imagined secretary (I say this with utmost affection; Hoffman is great as this awful, boring man). He's married to his third wife (Emma Thompson) who, despite his frequent assertions of her newfound embrace of sobriety, hovers forever between slightly buzzed and fall down drunk. His first wife, mother to Danny and Jean, is never seen; his second wife (Candice Bergen) is mother to Matthew. Though Danny is the son who grew up to have an artistic bent, albeit one that he would ultimately abandon in order to become a stay at home father, Matthew is the son in whom Harold has invested all of his pride and joy, finding any occasion to bring him up in conversation - and yet it's Danny who actually wants to have a relationship with Harold, while Matthew keeps his father at a distance, doing his due diligence as a son but nothing more.

Much of the film is spent picking apart the intricacies of how these three men interact with each other - the relationship between Danny and Matthew is, itself, fraught and colored by their individual relationships with Harold - mining comedy from their idiosyncrasies, including the way that two of them can ostensibly be talking to each other even as each is actually carrying on a conversation all by himself while ignoring everything that the other one is saying. There's an event that ends up throwing things into sharp relief, forcing the brothers to confront things about their father and themselves that they might prefer not to see but which also bring them closer together. It also brings them closer to Jean, who is sort of like the forgotten Meyerowitz with no life that's spoken of outside the bubble of the family (like Harold, both Danny and Matthew have wives who are only spoken of but never seen on screen, but Jean is presented without any kind of romantic history). When Jean tells them the story about Harold's friend, and about Harold's reaction when she told him, they ask her why she even bothers showing up for Harold now when he's treated her so poorly throughout her life. She responds that she's there simply because it's the decent thing to do, but adds that she also just likes hanging out with Danny and Matthew - which is both the sweetest and the saddest thing in the movie. Marvel doesn't get to do much through the course of the story, but when given center stage she truly makes the most of it.

There will be those for whom the presence of Sandler means that they'll take a pass on The Meyerowitz Stories, but as someone who is no particular fan of Sandler's I would encourage even his most ardent anti-fans to give this one a chance. Although there are still traces of the man-child full of anger that has been his bread and butter as a performer, those tendencies are tempered by Baumbach's tight control over things, which allows for a deeper understanding of what's below that temperamental surface - the jealousy, the self-doubt, the abandoned ambitions, the fear that the reason he's been ignored by his father all his life is because he's just not good enough. Baumbach plays to Sandler's strengths, but in a way that turns those hallmarks of Sandler's schtick into something more complex, sadder and more vulnerable than you typically see from him. The Meyerowitz Stories is the kind of film that gives its actors an opportunity to shine and Sandler seizes that opportunity as much as anyone in this sharp and funny tale of a dysfunctional family.
Posted by Norma Desmond at 8:00 AM