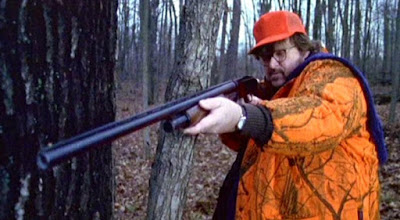 There are few people in the film industry more widely disliked by the general public than Michael Moore. Even people whose politics align with his own have a tendency to dislike him. He's smug, he's aggressive, and he loves to put himself center-stage in his work, making it particularly difficult to separate the art from the artist for those who like his films but not his personality since to a large extent his films are his personality. As a personality I find Moore hard to take at times (but I tend to have a very Canadian reaction to abrasiveness), but over the past several months I've come to find him weirdly refreshing. He's still smug, aggressive, and PT Barnum-esque in his approach, but at least you know where he stands and he never waters his opinions down in an attempt to appeal to as many people as possible - and that's something that stands the test of time. Before seeing it again two weeks ago, I hadn't seen Bowling for Columbine since it's original release and I found that it remains thought-provoking, entertaining, and so sadly relevant.

Although it takes its title from circumstances surrounding the Columbine massacre, and although many of the film's most affecting moments center on Columbine and its aftermath, Bowling for Columbine is not solely about that event. It is about gun violence in America generally as Moore investigates the cultural fixation on having guns and why it is that gun violence is such a magnified problem in the United States as compared to other places. As part of that investigation, Moore speaks to members of the Michigan militia, survivors of Columbine, writers, politicians, James Nichols, an associate of Timothy McVeigh who was briefly detained on suspicion of having participated in the Oklahoma City bombing, and celebrities such as Marilyn Manson, Matt Stone, and (controversially) Charlton Heston.

While scenes in Bowling for Columbine can often be funny (in the case of Moore's interview with Nichols, which does nothing to make Nicholas look like anything less than a crazy person, it's funny in a very scary way) it is for the most part a very serious-minded film. It shows security footage from Columbine, which remains a harrowing watch, over top of which it plays recordings of the 911 calls; it follows Moore and two survivors of Columbine in their quest to shame K-Mart into ceasing the sale of bullets in their stores; Moore speaks to a teacher who watched one of her grade school students die of a gunshot wound in the class; and it discusses the blame game that often gets played in the wake of a school shooting as rhetoric gets tossed around in an attempt to pin fault on anyone or anything other than the country's ease of access to firearms.

What struck me most thoroughly in returning to Bowling for Columbine 15 years after the fact is not just how relevant it has remained - if anything the right to arms and resistance to any kind of gun control have become more entrenched - but how clearly Moore is able to trace the obsession with guns to two things: fear and entitlement. The fear comes from a fostering in American culture of a feeling of insecurity in the people who have traditionally held social and political power, a fear that that power could be taken away and assumed by others (the insidious nature of racialized rhetoric is touched on, but Moore doesn't reduce the issue entirely to race). The entitlement is rooted in the second amendment, which hard-line gun advocates use as the be all and end all of any gun control argument, the position being that because the right exists, any call for moderation is an infringement upon that right. That Americans have the right to own guns is just a fact, the question that Moore keeps pushing is why private citizens need to own things like assault rifles and inevitably the answers seems to be, basically, "because we can." The same answer applies to why the NRA would go forward with a rally in a community recovering from a school shooting even though the leaders of that community have specifically asked them not to. They could have changed their plans by cancelling or postponing it or simply finding somewhere else to hold it, but instead they went ahead with it. They did it because they could, never pausing to reflect that just because you can do something doesn't mean that you should do it, or that you have to do it, or that doing it demonstrates good taste or empathy.

The most frequent criticism that I've seen of Moore is that he's a propagandist and that he's biased, but Moore doesn't pretend to be anything else. While many documentary filmmakers couch their positions within the subtext of their films, making arguments without seeming to and leading you towards their conclusions through the way that they structure and present their narratives, Moore's strategy is to explicitly state his thesis. His films are open about his political position, but this doesn't necessarily mean that his tactics with respect to getting footage are so forthright. Two months before the film's release, Charlton Heston announced that he had been diagnosed with Alzheimer's symptoms and ever since that fact has been used as a cudgel against Moore, which I don't really think is fair since he may not have had symptoms yet at the time he sat down to be interviewed for Bowling for Columbine and if you watch the scene in which they sit down together, Heston seems lucid and capable of defending himself. However, that doesn't mean that Moore comes to the interview with clean hands. In order to get the interview, Moore tells Heston that he's making a movie "about the gun issue" and identifies himself as a member of the NRA - both things that are true, but also both things that would give Heston reason to believe that Moore is making a piece of work sympathetic to the anti-gun control crowd. Moore can be ruthless in terms of how he gets his footage, but even if you don't agree with his politics I don't think you can successfully argue that he doesn't know how to put together a film (if he wasn't good at what he does, people wouldn't hate him so much), and even if he plays a bit fast and loose here, he still makes many solid points in the process.

It would be easy to look at Bowling for Columbine and say that it ultimately didn't have much of an effect. After all, the battle over gun control still rages, perhaps stronger than ever, and will perhaps never end (I mean, if 20 murdered six year olds can't change hearts and minds, and Republican politicians being shot while playing softball can't do it either, I have little confidence that anything ever will). But Bowling for Columbine definitely did have an indisputable impact on the film industry. Moore didn't invent the documentary, of course, but he did usher the form to a new level of commercial viability. At the time of its release, Bowling For Columbine was the highest grossing documentary of all time domestically, a status it would retain until 2004 when it was overtaken by Moore's next film, Fahrenheit 9/11, which remains the highest grossing documentary of all time with $42 million standing between it and the next film. Bowling for Columbine helped to popularize a genre which had long been considered the purview of film snobs and which has been thriving ever since. It has its flaws, but Bowling for Columbine is one of the most important films of the century so far.
Posted by Norma Desmond at 3:53 PM