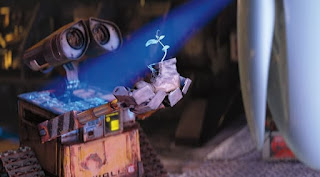 #70: Wall-E (2008)
700 years in the future, Earth is a giant garbage dump, its horizon dotted by skyscrapers of trash, its population reduced to one waste disposal robot working to make the planet inhabitable once again, compacting trash into tiny cubes but also salvaging items of interest, treasured items that alleviate an otherwise lonely existence. One day a drone appears and our hero, Wall-E, is instantly smitten, so much so that he goes beyond the ends of the Earth for her. However this is not merely a movie about an adorable robot in love, but one which casts a critical eye on our treatment of the environment, our embrace of the artificial at the expense of the real (is it just ironic or is the film making a point when it makes Wall-E feel more human than the actual human characters?), and our increasingly disposable culture. Heartfelt and splendidly animated, Wall-E remains one of Pixar's best films. 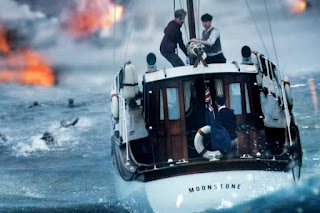 #69: Dunkirk (2017)
From the air, from the sea, from the beach, in Dunkirk Christopher Nolan takes the large scale operation of the evacuation of Dunkirk and renders it in intimate detail. Splitting the story into three parts that unfold concurrently, Nolan divides the perspective between a Spitfire pilot tasked with providing air cover for the evacuation, the civilians manning one of the "little ships" that heed the call and head into danger, and the soldiers waiting for rescue from the beach where they live in constant fear of the German advance from the ground and attack from the air. The beach, in particular, is depicted like as a form of purgatory, a place from which the men are constantly trying to escape only to be thrust back, mentally and emotionally broken a little bit more each time it happens as their hope for survival comes away. A technical marvel augmented by Nolan's agile, stripped down storytelling, Dunkirk is a film for the ages. 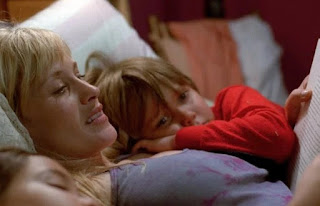 #68: Boyhood (2014)
When you consider how much could have gone wrong, Boyhood seems like something of a miracle. Made over the course of 12 years, a period during which any of the actors involved could conceivably have dropped out, during which director Richard Linklater could have lost interest or come up against a wall as he tried to carry the story from one year to the next, Boyhood emerges as a fascinating examination of our culture during the years 2002 to 2013 as seen through vignettes in the life of a boy growing up. Though it can occasionally be a bit messy, life itself is pretty messy, and Boyhood does an amazing job at capturing the steady flow of time as something that is lived in, rather than ironically looked back on by way of winking at pop culture landmarks. Boyhood is a film that is in its moments as they happen, growing with its protagonist and figuring itself out just as he is figuring himself out; to paraphrase the protagonist in the film's final exchange, whatever is happening in the film from scene to scene, it's always right now - and that inherent vitality has helped Boyhood remain a resonant work of art. 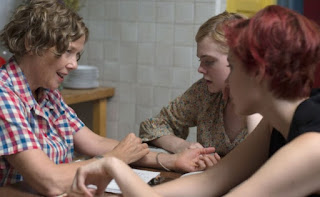 #67: 20th Century Women (2016)
Mike Mills' film is about a teenage boy becoming a man, but it feels like a love letter to complicated women, women who cannot be summed up with a simple adjective. Chief among them is the one played by Annette Bening, a woman who can't quite reconcile her idea of who she wants to be to the comfort levels that she actually possesses. As someone who belongs to the generation raised during the Depression but who put off having children until later in life so that she's experiencing motherhood at a different time from other women her age did and at the same time as women who grew up in different cultural circumstances, she consequently always finds herself just slightly out of step with everything happening around her. There is no natural place for her, so she's spent her adult life making a place for herself, and Bening's performance is so rich, so complex, so note perfect scene in and scene out, that it doesn't even feel like a performance at all. 20th Century Women was one of the forgotten films of 2016, but it's one of the best films of that year and any of the last ten years. 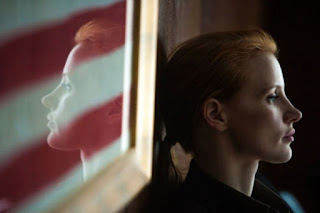 #66: Zero Dark Thirty (2012)
Probably one of the most controversial movies of the last several years, I actually think that Zero Dark Thirty is a deeply misunderstood movie. It's been criticized by some for being pro-torture, but I think that acknowledging torture isn't the same thing as advocating it and the picture that the film paints of the CIA and its methods is anything but positive - the protagonist even tells the Navy Seal team, as they're planning the raid, that they're going to kill bin Laden for her. Not as a last resort but as the mandate of the mission - framing the hunt for Osama bin Laden as one driven less by a desire for "justice" and more by a need for "revenge." But looking beyond the arguable politics, you're left with a film that is gripping in the way that it unfolds its narrative and which features a female protagonist who is constantly subverting expectations of what the female lead in a film is "supposed" to be. It's not always an easy film to watch, but it's an expertly constructed piece of filmmaking. 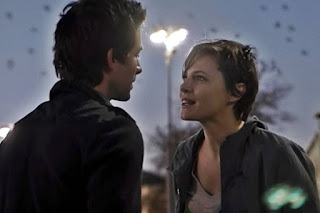 #65: Upstream Color (2013)
One of the most original voices in film today, filmmaker Shane Carruth is unafraid to challenge the audience and leave the viewer to find his or her way into the story without much in the way of aid. Upstream Color is about two people who are drawn together after they become infected by a parasite - there's more to it than that, but to explain the whole process in a way that made sense would take a few paragraphs; the simple version is that the infection loops them in to the life cycle of "an ageless organism" which bonds them to each other (and, also, to a pair of pigs whose experiences echo into them) but also leaves them thinking and behaving in ways that they do not understand. Carruth doesn't spell this all out, but leaves the viewer to follow the stages of the process as he shows them, unfolding it with a strong visual style which demonstrates that the artistic aspect of his storytelling is just as strong as the intellectual one. Upstream Color isn't an "easy" film, but it's a sensory experience that fascinates. 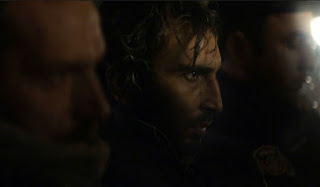 #64: Once Upon a Time in Anatolia (2011)
Nuri Bilge Ceylan is all about the minutiae in Once Upon a Time in Anatolia, a crime procedural in which the crime has already been solved and all that remains is the cleaning up of loose ends. Set over a long night during which law enforcement accompany the two accused in retrieving the body of the man they've killed and buried, Once Upon a Time in Anatolia devotes itself not to the crime itself, the circumstances of which remains somewhat vague, but to the men who have assembled to gather what remains of the evidence. They banter, they have casually and seemingly immaterial conversations, all while Ceylan folds back the layers to reveal different aspects of the characters' personalities. While a film like this, so psychologically intimate, depends a lot on dialogue, Ceylan further achieves his aim through the way that he frames the events of the film, using space (or the lack of it) in a way that deepens the viewers' understanding of the characters. It makes for a spellbinding film of patient, character-based storytelling. 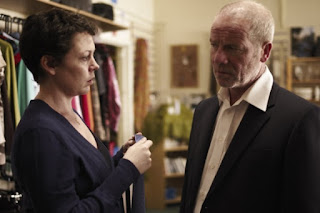 #63: Tyrannosaur (2011)
Movies don't get much bleaker than Paddy Considine's Tyrannosaur, which opens with its protagonist kicking his dog to death in a drunken rage. Believe it or not, it gets more depressing from there, but is also becomes an utterly captivating character study that views its two main characters with such piercing clarity that you can't look away even when you would like to. It's a story about two alcoholics, one open about his affliction and content to go out and drink and rage from sun up to sun down, the other a secret drinker trying to drown the pain of her abusive marriage. In a different movie, this would be the story of a damaged man rescued by the kindness of a good woman or of a bad man redeemed by rescuing a vulnerable woman, but Tyrannosaur aims for something messier and something that feels much closer to the unvarnished truth. It is not an easy sit, but it a deeply rewarding and rich film. 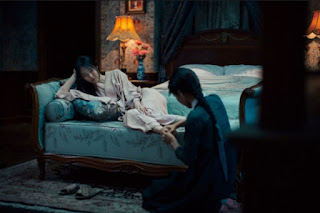 #62: The Handmaiden (2016)
This is a sumptuous, intricate contraption of a movie. A loose adaptation of the novel Fingersmith, which transplants the action from Victorian England to pre-WWII Japanese occupied Korea, Park Chan-wook's lurid little gem is a film that's enjoyable to watch as much for how it tells its story as for the story itself. Centering on two women who are masters of manipulation (or, at least, who are masters at it in their own minds), The Handmaiden deftly, even gracefully, navigates split perspectives, double crosses, and doubling backs, gaining in urgency scene by scene as it propels itself towards its conclusion. Dividing its time between eroticism and violence, with dashes of mystery and a surprising amount of humor, and anchored by fantastic performances from Kim Min-hee and Kim Tae-ri, The Handmaiden is a vicious, beautiful, lively, and all around delightful movie. 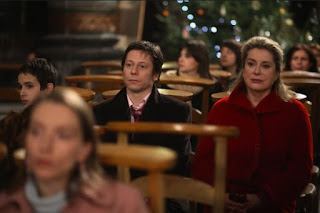 #61: A Christmas Tale (2008)
If nothing else, Arnaud Desplechin's A Christmas Tale should make anyone feel better about their own family gatherings. A story of a dysfunctional family - for mysterious reasons one brother has been exiled from the family for years at the request of the sister, the other brother is married to a woman with whom both he and his cousin are in love and who loves both of them, one of the grandsons is afflicted by mental illness - brought together for the holidays as a result of the matriarch being diagnosed with cancer. Archly funny, the film treads some of the same narrative ground as similar films but keeps the viewer on their toes through Desplechin's playful approach, which sees him shifting between styles and tones as if to demonstrate how differently we might see the situation and the characters if he just turned the plot this way or that. A showcase for several great performances and a more psychologically rich and resonant take than most stories of its type, A Christmas Tale is a wonderfully entertaining film.
Posted by Norma Desmond at 8:00 AM