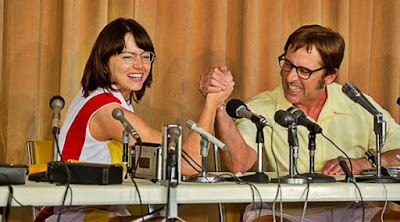 In the words of the film: "Times change. You should know. You just changed them." In the words of Hemingway: "Isn't it pretty to think so?" In 1973 Billie Jean King and Bobby Riggs played a match dubbed the "Battle of the Sexes" that was aired on television in prime time. It was a ratings success for ABC. I'm not sure how much of an effect it had on anything else, at least directly, but symbolism can be a powerful thing and sometimes what something means matters less than what it feels like it means. Battle of the Sexes, written by Simon Beaufoy (Slumdog Millionaire, 127 Hours) and directed by Jonathan Dayton and Valerie Faris (Little Miss Sunshine), presents an awfully rose-colored view of things, but that presentation is nevertheless awfully entertaining.

Condensing a few years in the early '70s for the sake of efficient storytelling, Battle of the Sexes opens with Billie Jean King (Emma Stone) and other female tennis players deciding to start their own tournament circuit, having grown frustrated by the massive pay disparity between male and female players and the argument that male players need to be payed so much more because men need to be able to support families. After securing sponsorship from Virginia Slims the women set out on their own, battling against the tennis establishment (represented here by Jack Kramer, played by Bill Pullman) in order to demonstrate that the women's game can be the main draw and not merely a secondary show. While out on the tour, and despite her marriage, King develops a relationship with the tour's hairdresser Marilyn Barnett (Andrea Riseborough) and the stress of leading a double life (complete with an incident where her husband and lover find themselves in the same elevator, amiably chatting while completely unaware that they're on their way to see the same woman) begins to throw her off her game, resulting in her losing her standing as the number one female player to Margaret Court (Jessica McNamee).

Meanwhile, Bobby Riggs (Steve Carell) is stagnating from the boredom of working for his father-in-law's company and struggling to keep his still active gambling habit a secret from his wife, Priscilla (Elisabeth Shue). Eager to get back into the limelight (and make some money), Riggs tries to talk King into a match which he sells as the ultimate chauvinist versus feminist showdown. King declines, but Court agrees to take him up on it and, just as King tries to warn Court that he will, Riggs proceeds to make a sideshow out of the event, not only beating his opponent but making it look like a big joke while he does it. Seeing Court's defeat as a blow that threatens the survival of the women's game, King finally agrees to play Riggs, knowing that if she doesn't beat him it could be the end of everything she and the other women players have worked so hard for.

Despite its title, Battle of the Sexes only spends maybe its final third on the titular event (that includes King's decision to participate at all and the inevitable training montages) and while King is very much its protagonist, Riggs really isn't the antagonist. A showboat with a desperation for attention and relevance and a private life in shambles, and played with such joviality by Carell, Riggs is hard to dislike or to take seriously as the "villain." The role instead goes to Kramer, insofar as the film can be said to have a villain; really, Kramer is just a guy who (like a number of men even today, judging by the kinds of comments that any article about women's sports inevitably receive) just doesn't get what any of this is about. It is not and was never about women being "better" than men or vice versa (something that King explicitly states to a male reporter before the big match); it was (and remains) about getting men to stop being so dismissive of women's athletic achievements and acknowledge that there's value in what women are doing, too. Maybe a certain sport doesn't interest you (though I seriously doubt that any of the dudes who habitually pop in to the comments section on any post about women in sports to offer that it's "not a real sport" have ever actually watched what they're taking the time to comment on); that doesn't mean it's not legitimate or that no one could be interested in it or that it's stupid. That's what it's about for King in the movie: it's not about being "better" than Riggs or any other man; it's just about getting a place at the table for herself and the other women in her sport.

That demand for respect for herself and her sport is the film's primary concern, rather than the actual match itself. If anything, the match ends up being the third most important element of the story, with King's sexuality and her struggle to keep it secret while in the spotlight becoming a close second and allowing Stone to do some wonderfully subtle, nuanced work as King tries to figure out how to negotiate this thorny territory. Her relationship with her husband is a solid and affectionate partnership - she doesn't want to hurt him but, at the same time, she can't deny what she feels for Marilyn. However, "deny" is exactly what she's going to have to do, at least in public, in order to maintain her career because coming out in 1973 would mean losing everything. The film explores this with sensitivity and grace and Stone and Riseborough are wonderful in their scenes together playing two women trying to carve out some space for themselves, even if that space can only exist in the shadows.

Battle of the Sexes is a perfectly enjoyable film. I was entertained by it even though I was aware that it was eliding certain details in order to keep the wind from coming out of the sails of the film's upbeat ending. In real life the relationship between King and Barnett would end very badly, with the former being outed when the latter sued for palimony and then having to prolong her playing career in order to pay attorneys, having lost her endorsements. As for the Battle of the Sexes event itself, while certainly a success from a television ratings perspective, its actual effect on the sport and women's place within it is debatable: pay equality is still an issue being argued over in tennis and though the Grand Slams all offer equal prize money to its male and female players now (the US Open started awarding equal prize money in 1973, a few weeks before the Battle of the Sexes match, while the Australian Open, French Open, and Wimbledon would eventually follow suit in 2001, 2006, and 2007, respectively), female athletes still struggle to get their due compared to their male colleagues; and the actual outcome of the match has been dismissed for decades by those who cling to the idea that Riggs threw it, because it's apparently inconceivable that a 55 year old man who gave up training halfway through the run-up to the match could actually be beaten by a 29 year old woman in her prime (the story goes that Riggs bet against himself in order to make enough money to pay his gambling debts... never mind that, had he won, he would not only collect the prize for the match but he would then also have had the opportunity for an even bigger payday playing Chris Evert). But if conspiracy theorists can comfort themselves with a story that suits them, then it's no big crime for the film to comfort itself with a little bit of back patting. It's solidly and consistently entertaining enough that it earns at least that much.
Posted by Norma Desmond at 8:00 AM