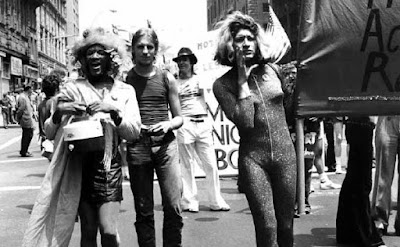 History is written by the victors, which means that it's written by those in power. Even when the history in question is the history of a marginalized group, it tends to be written from the perspective of those members who most closely align with the majority in power, which is why the history of the gay rights movement often seems like the history of gay white men. Just look at the controversy surrounding last year's Stonewall, which failed to gain the support of the wider LGBTQ community due to its displacement of trans women of color in favor of giving ownership of the story of a white, middle class young man. The Death and Life of Marsha P. Johnson is about two of those women that Stonewall displaced, one of whom gives the film its title, the other of whom emerges as the documentary's most fascinating figure. Although not quite as focused as director David France's previous film, the brilliant and wrenching How to Survive a Plague, The Death and Life of Marsha P. Johnson is an urgent and moving film about a segment of the population that is so often disregarded.

The root of the film is the 1992 death of Marsha P. Johnson, a transgender activist who participated in the Stonewall riots and was a key figure in the movement that flowed from the riots, which the police declared a suicide even as members of the LGBTQ community demanded an investigation. Exactly what happened to Johnson - whose body was found floating in the Hudson river - is a mystery. Some of those who knew her and appear in the film (in present day and archival footage) insist that she wasn't suicidal and that before her death she had complained that a car had been following her. As far as the police are concerned, the case is closed; as far as the community is concerned, her case is cold. The narrative of the film is built around the investigation into her cold case by Victoria Cruz, who hopes to solve it before she retires from her job with New York City's Anti-Violence Project. Culling the information that she has and the information she gains by talking to Johnson's siblings, her former roommate, and other people who knew her, Cruz comes up with various possible scenarios, including that Johnson's death might have been the result of an accident, that she may have been murdered at the hands of the police (a theory that seems plausible when Cruz receives a phone call from an ex-officer warning her to stop "playing detective"), or that she may have been murdered by the mob (her roommate was vocal in the push to cut ties between the annual gay pride festival and the mob, which controlled the flow of money raised therein).

The mystery is an intriguing one but, whether due to a lack of evidence that Cruz was able to gather or due to a lack of archival footage available featuring Johnson, the film begins to shift away from Johnson shortly after establishing it. It doesn't abandon Johnson - even in her absence it finds a way to weave the impact that Johnson had on the people around her into the story - but, for a film called The Death and Life of Marsha P. Johnson it really doesn't tell us much about her life and it cannot tell us much about her death. To a degree this is a bit disappointing, particularly if the film's set up leaves you expecting a true crime whodunnit, but France finds a way to work with what he has available to him to make a film that digs deep in a different way. Part of that is through the inclusion of a subplot about the murder of Islan Nettles, a trans woman beaten to death by a man who will plead the "panic defense" at trial and end up sentenced to only 12 years for manslaughter. As Cruz seeks to get further resources for her investigation into Johnson's death, a co-worker points out that their funding is limited and wonders if they should focus their resources more on the people who can be helped in the here and now. The argument is not that Johnson does not deserve justice; it's simply a practical observation that if there's time and money to be spent, it's the vulnerable people who are still alive who ought to be the priority.

The other part of that is through Sylvia Rivera, through whom the film finds a literal voice for its most salient points. Like Johnson, Rivera was a participant at the Stonewall riots and a major figure in the activism that followed. Unlike Johnson, who is universally described as joyful figure, Rivera's relationship with the community around her is depicted as being more fraught. In footage from a 1973 gay rights rally, Rivera angrily denounces the crowd (which has been booing her since she got on stage) for its exclusion and erasure of the trans part of the community. Trans people were on the front lines of the movement and when they fought, they fought for everyone but when they need help, the rest of the community turns its backs, unwilling to sacrifice for them the way that they have sacrificed for everyone else. It is a painful scene in which Rivera, hurt and angry, calls the crowd out for leaning back on the privilege that being "white middle-class" affords them and it's all the more searing for how much what she says remains true. In the present day activists lament that the rest of the community isn't coming out to demand justice for Islan Nettles, leaving trans part of the community to do all the heavy lifting alone. A minority within a minority, misunderstood, feared, and ignored, watching while things get better for everyone else but remain much the same for them. If the film cannot solve the mystery of Johnson's death, it can at least shine a light on the failure of the gay and allied community to stand up for the segment of the population most vulnerable to violence.

The film's exploration of Rivera and her life is so interesting that it's enough to wish for an entire documentary devoted simply to her. A founder (with Johnson) of STAR (Street Transvestites Action Revolutionaries), an organization devoted to trans rights which would also open STAR house to shelter homeless trans people, Rivera would eventually end up homeless herself after falling into alcoholism and then find her way back to the community that had shunned her and which she had excoriated in turn. Rivera (who died in 2002 and only appears in archival footage) is a deeply compelling character who ends up holding the center of a sizable portion of the film, even though Johnson is the one who provides it with its title. Ultimately, though, The Death and Life of Marsha P. Johnson isn't about any one person, but about something much bigger than that and in that respect it's a piece of cinema activism that works very well.
Posted by Norma Desmond at 11:00 AM