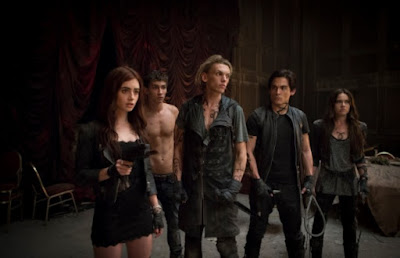 While box office itself can rarely be accurately predicted - movies that are supposed to be sure things can fail, movies expected to fail can sometimes find their audience and surprise everyone; the only certain thing seems to be that Star Wars will always make money - one of the most predictable things about movies when it comes to box office is that if something succeeds once, Hollywood will try to replicate that success multiple times, usually with increasingly diminishing returns, until the idea is thoroughly dead. The massive success of the Twilight movies guaranteed that there would be copy-cat properties entering the market place, even as time and again the Twilight audience rejected those properties because, really, all they wanted was more Twilight. Remember Vampire Academy? Beautiful Creatures? What about The Host, which had the advantage of being a Stephenie Meyer adaptation? I'm pretty sure nobody does. Two of those movies came out in 2013, incidentally, which probably should have made the makers of The Mortal Instruments: City of Bones take a deep breath and consider that they might have made a huge mistake sinking $60 million into their adaptation.

City of Bones is your basic hodgepodge of familiar tropes copy and pasted together. There's the seemingly ordinary girl who discovers that she's actually not like other humans. There's the secret world hidden just in the shadows of our own world, accessible only to the very special (and, in this case, to the special-adjacent). There's an ancient order with rules, mythology, and objects of great importance, as well as factions which have been at war with each other for a period of time. There are supernatural creatures. There's a love triangle. There are a bunch of "teenagers" walking around looking like Hot Topic threw up on them. There's no stone in the fantasy-romance genre that City of Bones leaves unturned, including the devastating family secret (which may not actually be true but results in a genuinely, albeit unintentionally, hilarious scene where a character points to his ring, which has a "W" insignia, as proof that what he's been told is not true, only for another character to take the ring and turn it upside down so that it's an "M" to prove that it is true) and the betrayal by a trusted authority figure (there are actually two of these, but one is a fake-out).

With all of this going on, you would think that City of Bones would occasionally hit on something interesting, but it really doesn't. This is an incredibly boring movie that barely manages to stoke any interest even during the action scenes where the narrative is at its highest intensity. Partly this is because the CGI in the film is absolutely terrible, which makes it hard to engage with what's happening and take it seriously, and partly it's because the narrative never develops a successful storytelling rhythm that will allow it to accomplish all of the things it's trying to accomplish. The story has no fewer than six major tasks: it has to build its world, which includes demons, half-human/half-angel hybrids, vampires, werewolves, and witches (but not zombies, as one character is quick to point out), and establish the rules, alliances, rivalries, etc. within it. It has to establish its protagonist, Clary (Lily Collins), from whom the truth about herself has been hidden for her entire life with the help of periodic mind wipes by a warlock, and devote some time to her recalling her lost memories, discovering her abilities, and establishing what turns out to be heretofore unknown and complicated family dynamics. It has to give her two authority figures who betray her trust (the first her mother's friend, who turns out to be a werewolf, the second the leader of the Shadowhunters, who hunt demons) and challenge her assumptions about who she should and who she shouldn't trust. It has to flesh out the backstory that surrounds the object that acts as the catalyst to the story and build towards a showdown with the bad guy (Jonathan Rhys Meyers, who could not have phoned it in more). It has to create conflict via one major love triangle between Clary, her long-time friend Simon (Robert Sheehan), and Shadowhunter Jace (Jamie Campbell Bower), as well as through a minor love triangle between Clary, Jace, and Jace's fellow Shadowhunter Alec (Kevin Zegers), who has a crush on him and wants to get rid of Clary. And it has to set itself up for future movies. Every time it shifts its focus between one task and another (but especially when it shifts to build the romance between Clary and Jace) it stops itself dead and has to get started all over again.

When they snapped up the rights to Cassandra Clare's The Mortal Instruments series, I have no doubt that producers felt like they were sitting on a potential goldmine that, while it might not reach Twilight's insane heights, could at least propel it to a modest financial success (though it might be noted that part of the reason why Twilight was such a success was that its first three entries were budgeted at $37 million, $50 million, and $68 million, with their increasing theatrical success ensuring that they each made their money back and then some at the domestic box office alone). As copycats go, this one seems to hew pretty closely, with a female lead styled to bear a passing resemblance to Kristen Stewart's Twilight look, and putting its love triangle front and center, perhaps envisioning that audiences would identify as either "Team Jace" or "Team Simon," but whatever magic Twilight had (and I don't pretend to know since my familiarity with those movies is limited entirely to this scene), City of Bones does not share it. It never feels like anything more than an attempt to ride the wave created by Twilight and it just sits there on the screen like lead.

In an instance of almost unfathomable hubris, the makers of City of Bones went ahead and announced plans for a sequel three months before this even movie came out, so confident in its coming success that production on the sequel was scheduled to begin a month after City of Bones' release. That didn't happen (though the sequel somehow managed to get Sigourney Weaver signed on) and the sequel was first "pushed back" and then "postponed indefinitely" as a result of the financial failure of City of Bones. That the film is also a creative failure is made evident by the fact that the series would eventually be revived as a TV series, with the first season apparently rehashing many of the events (including the whole set up of the story) of the film, rather than using the film as a jumping off-point for a continuation. That doesn't denote particularly fond feelings for the film, even from those who would be expected to follow it from the theater to TV screens. There's just no way to chalk The Mortal Instruments: City of Bones up as a win in any respect; it's a bust through and through.