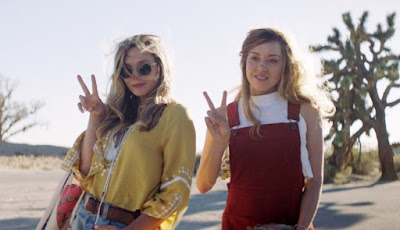 It is perhaps a uniquely hypocritical feature of our current day and age that people share literally everything about themselves and their lives online, but then get indignant about other people wanting to be up in their business. In Matt Spicer's Ingrid Goes West, a sometimes pointed but sometimes toothless satire, an "influencer" meets her audience and ends up with #negativevibes, resulting in an extremely dark comedy that centers on possibly the most unapologetically sharped-edged female protagonists since Charlize Theron in Young Adult. You can't say that Ingrid Goes West doesn't go for broke with its central character, though you can certainly argue that it begins to lose the thread somewhat in its third act. It will be interesting to see how a movie like this, so firmly rooted in the technology and trends of the here and now, ages, but seeing it in 2017 is like looking at a snapshot of many of the worst qualities of our era. Fortunately the film is asking us to laugh at them and, more often than not, giving us good reason to do so.

Ingrid, played to the hilt by Aubrey Plaza, is a young woman whose emotional and mental equilibrium has been upset by the death of her mother following a long illness. The only thing she takes comfort in - and I use that word loosely, given the obsessive, dead eyed way that she engages in it - is social media, which seemingly provides her with all the "human contact" she gets on a day to day basis. After she begins following Instagram influencer (pardon me, "photographer") Taylor Sloane (Elizabeth Olsen) and makes a comment that results in an off-hand response from Taylor, she decides to cash in the inheritance her mother has left her and head for Los Angeles in the hope of becoming in-person friends with her new obsession. Although finding Taylor is easy enough, thanks to the digital trail she leaves of her comings and goings, being accepted by her is a little more difficult, particularly for someone with Ingrid's limited social skill set. But Ingrid is nothing if not an outside the box thinker and she finds a way to ingratiate herself with Taylor and her husband, Ezra (Wyatt Russell), enjoying a brief period in the sunshine of Taylor's attention.

But the thing about Ingrid is, even when she's in Taylor's company, she's never really happy. She says the things that she thinks she's supposed to say and she strikes the poses that she thinks she's supposed to strike, but there's always a layer of discomfort to it and Plaza imbues Ingrid with a growing sense of desperation as she struggles to comprehend why everything still feels so empty even though she has what she's been led to believe will leave her feeling as fulfilled as the happy people on Instagram make themselves appear. That feeling of emptiness is shared by Ezra, the bearded and man-bunned co-star that Taylor's fauxhemian image demands, who has quit his job at Taylor's request in order to become an artist. If there is any one joke that stands above the others in Ingrid Goes West, it is the sight gag of Ezra's art, which consists of repurposed paintings of landscapes and animals across which he's written things like "#Squad Goals." While Taylor explains to Ingrid that Ezra hasn't sold much because he refuses to engage in social media and is bad at selling himself, the truth is that Ezra is embarrassed by his work because it's terrible, something which Russell conveys entirely through body language when Ezra shows Ingrid his art, and because it's come from a fraudulent place. Ezra doesn't actually want to be an artist, but Taylor wants to be able to say that her husband is an artist, just as she wants to be able to say that Norman Mailer's The Deer Park is her favorite book, not because it is (she has, in fact, never read it) but because the idea of it fits with the idea of herself that she's trying to create.

The unreality of Taylor's existence, which is curated to the last detail through social media, is a subject rife with possibilities that a canny filmmaker could exploit, but Spicer ultimately shies away from doing so. Instead he keeps his focus on Ingrid, who is so deranged that it's impossible to be on her side even when she's right. When the friendship between Ingrid and Taylor inevitably ruptures, Ingrid is rejected with full force and lashes out by tearing down Taylor's carefully calibrated image and the things she says to Taylor are not without truth. Taylor doesn't live her life so much as she performs it for the sake of an audience, painstakingly putting together "spontaneous" moments and capturing them for posterity so that she can put them out into the social media world and people will think she's someone to be envied, her life something to aspire to. Whatever was once real about Taylor has long since become false, transformed into a means of marketing herself because her "life" has become the product that she's selling.

If this phoniness thinly disguised as genuineness were Ingrid Goes West's target, I think it would have had the potential to be brilliant, but instead the film aims lower and comes to a much more conventional conclusion. Ingrid makes it known to Taylor that she sees through her to the hollowness at her core, but that's merely a small victory she gets in the midst of a very public humiliation which ends with Taylor, Ezra, and Taylor's brother Nicky (Billy Magnussen) - the sort of character who populates Bret Easton Ellis stories and becomes Ingrid's instant nemesis - smugly watching Ingrid slink away. The joke isn't that Ingrid invests herself in something that she learns is only a mirage, allowing her to reject it and gain the upper hand; the joke is that someone as unhinged as Ingrid can parlay her darkest moment into viral fame, finding a hook that makes her a (probably temporary) folk hero because people on the internet are quick to jump on bandwagons without having anything more than the most cursory information. It's not that that's unbelievable (although I think there's some ambiguity about the ending), it's just that a crazy person is a relatively easy target and nothing particularly revelatory is gleaned from following this particular narrative path.

How much one enjoys Ingrid Goes West will depend in no small part on how much one enjoys cringe comedy, as Spicer and Plaza go all in on creating a theater of discomfort surrounding the despairing protagonist, but the film is funny in other ways, too. Many of its observations are sharp and many of its moments are clever, and the story's inherent darkness is alleviated somewhat by the presence of O'Shea Jackson Jr. as Ingrid's landlord/love interest, a Batman enthusiast (who is fixated on Batman Forever, in particular) who takes a shine to her because they have something in common. Jackson walks away with each and every scene he's in, his relaxed charisma an effective counterbalance to the blazing intensity of Plaza's performance and the purposely effortful effortlessness of Olsen's. While I don't think that it sticks the landing, there's more than enough in Ingrid Goes West to make it worth watching, and the performances are a big part of the reason why.
Posted by Norma Desmond at 8:00 AM