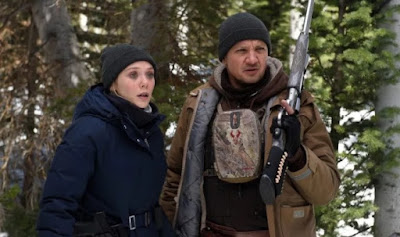 Late in the film, a character remarks that the case at the center of the story is practically solving itself. The reason that this is true is because it's a story that's so depressingly familiar about men, women, power, entitlement, and the institutionalized racism that allows the law to cherry pick what kinds of victims are worth seeking justice for. Written and directed by Taylor Sheridan, who's riding a hot streak after writing the screenplays for 2015's Sicario and 2016's Hell or High Water, Wind River is a sharp edged, fast moving thriller, although I don't think it's quite the advocacy piece that its final words might like to suggest. Wind River is less about giving voice to people traditionally treated as disposable by society and the media than it is a story about unforgiving men (in their most traditional form, at that) in an unforgiving land, but it's an absolutely engrossing film of its type and confirms Sheridan as one of the most exciting voices working in Hollywood today.

Wind River opens with a young woman running barefoot through the snow in the middle of the night - there's no further context needed; these few simple facts do more than enough to set in motion the story, of which Sheridan will unfold the rest in the same lean, only as much information as absolutely necessary fashion. The body is found the next day by Cory Lambert (Jeremy Renner), a US Fish and Wildlife Service agent working to track down a cougar that has killed some local livestock, and the FBI sends rookie agent Jane Banner (Elizabeth Olsen) to the scene, located on the Wind River Reservation in Wyoming. Having been sent simply because she was the closest agent to the scene, Jane is unprepared for the weather (she's come from Las Vegas, wearing a thin coat and the worst possible shoes for trekking through the snow) and unprepared to manage a case like this on her own. When the coroner lists the cause of death as exposure to the inclement weather, explaining to Jane that while the body shows signs of sexual assault and of a blow to the head, what actually killed her was inhaling the sub-zero air and experiencing a pulmonary hemorrhage, Jane expresses exasperation. She's not the person who can solve the crime, she explains. She's just the person who can get it classified as a murder so that other FBI agents will be dispatched to the scene.

The situation being what it is, Jane is forced to take things in hand and although she has the assistance of the tribal police force, that still leaves her lacking in manpower and resources (the tribal police's Sheriff, played by Graham Greene, reacts to her frustration at what they don't have with something that's almost like amusement at her naivete, not because he doesn't take the situation seriously but because this has been the reality he's been dealing with his entire life - he knows how it is, but she's pointing it out to him like it's news). She asks Cory to assist with the case and he uses his abilities as a tracker and his familiarity with the land to help bring things into focus as both the expected clues (word of a mysterious boyfriend that no one seems to have met) and some unexpected ones turn up. Stripped to its essence, Wind River is a conventional procedural story, but its narrative simplicity is ultimately its strength as the straightforward story gives Sheridan the time and space necessary to focus on the characters rather than plot points. Wind River is a film that's very much about the psychological damage of violent crime to a community and of the ongoing trauma experienced by the families of victims, which gives the film an emotional heft that many thrillers lack.

Yet while Wind River is incredibly effective as a movie in the sense that it captures the viewer and leaves one totally engrossed, and in the sense that it centers on characters who are well developed enough to earn the audience's sympathy and identification, it is also a film that presents itself as speaking on behalf of marginalized/victimized people while it appropriates those peoples' struggles and pain to give complexity to its white characters. Although the film's sympathy is with the aboriginal population on the reservation, it's a story seen through the eyes of two white people, one (Jane) the prototypical outsider who is constantly stepping in it because she comes in with all kinds of "othering" assumptions, the other (Cory) the equally prototypical good white person who has been accepted into the "othered" community, and although Sheridan has expressed awareness of the potential for criticism of that decision and defended it by stating that he didn't want to be a white guy putting words in the mouths of Native American people, that explanation rings a bit hollow. For one thing, there are Native American supporting characters, so he's already putting words in their mouths, the only difference is in screen time and the characters' importance to the story. For another, if authenticity was a concern, a Native American writer could always have been hired to collaborate on the script (in fairness to Sheridan, he did reportedly take the step of sharing the script with leaders from the Wind River reservation and having them on set).

Aside from a line from another character dismissing Cory by telling him that the only thing Native about him is his ex-wife and their family, there's no actual reason that Cory needs to be white, particularly when you take into account that his personal trauma, revealed through the course of the film, is one that so many aboriginal people have experienced. Sheridan may not have wanted to say "this is your experience" to Native Americans, but I'm not sure that assigning that experience to a white guy is really an improvement. In addition to walking this dubious line on cultural appropriation, Wind River positions itself as advocating for women who have been treated as disposable by society even as it treats its female characters as little more than accessories to the story. Aside from Jane, who is wholly out of her depth and whose function in the narrative is to not know things so that Cory can explain them to her and, by extension, to the audience, there are only four women in the film: Cory's ex-wife who appears in two short scenes, Cory's ex-mother-in-law who appears in one scene, the mother of the victim who appears briefly twice but doesn't get a single line, and the victim who appears in the first scene and then later in a flashback. For a film that directly addresses the epidemic of violence, sexual and otherwise, against aboriginal women and the lack of response to same by law enforcement and governments, Wind River doesn't do much to provide these women with any kind of agency. Instead of being at the center of the story they exist on the margins of it, and the deaths of two young women are used as a means of teasing emotion out of the male characters. In effect this becomes less a story about disenfranchised women and more a treatise on masculinity that anchors itself to the most traditional of archetypes: the man who is strong, endlessly capable, and, if not silent, then economical with the words that he speaks so that one is never wasted. A "man's man" as seen in countless films and whose inherent nobility is enhanced in comparison to the culprit, who is weak-willed, whiny, entitled, and physically, morally, and mentally soft.

But while I had issues with the way that Wind River engages with its themes and how it subtextually works to further enshrine tropes that promote the white male point-of-view above all others, I still think it's a good film. Looking at it purely on the level of craft, it's a pretty masterfully put together film that functions like a well-oiled machine and captivates as it unfolds itself. Sheridan may not yet have a lengthy record as a director (this is his second feature as a director, the first being 2011's Vile), but he has all the confidence of an experienced hand and understands his own strengths as a storyteller well and has cast the film with actors who complement his spare style. Renner, in particular and all thematic caveats above aside, equips himself well in the lead role, as does Gil Birmingham (last seen in Hell or High Water) as Martin, the father of the victim. Wind River is a messy film to try to engage with thematically, but it's an excellent watch nevertheless.
Posted by Norma Desmond at 8:00 AM