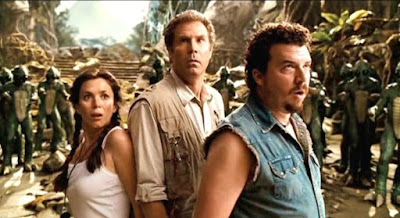 Land of the Lost is the sort of movie that feels like its genesis is in an inside joke between its makers. It has that insular specificity, that sense that the people involved in making it are so focused on entertaining themselves that they never paused to consider whether it would be entertaining to anyone else. Granted, I'm probably not the ideal audience for this movie because I've never seen the TV show, but given the film's tepid box office take it seems safe to assume that Universal took it for granted that the property was much more beloved than is actually the case. Having sunk $100 million into discovering that, the sting of the film's failure was still such that more than two years later former Universal head Ron Meyer would dismiss it as "just crap." It's an assessment that's hard to argue with.

The TV series Land of the Lost was about a father named Rick Marshall and his two children, Will and Holly, becoming trapped in an alternate dimension where have various adventures and encounter dinosaurs, lizard people, and primate creatures. The movie Land of the Lost is about a paleontologist named Rick Marshall (Will Ferrell) who becomes a laughing stock due to his theories about time warps and who ends up traveling to an alternate dimension along with a dude named Will (Danny Bride), cast in the role of "funny sidekick," and a Doctoral student named Holly (Anna Friel), cast in the role of "love interest." I pause here to note that while it was always going to be a little weird that the filmmakers chose to use the exact same names for the characters but transform Holly from daughter to love interest, it becomes particularly creepy when you stand back from the film and consider how Holly figures into its narrative. For one thing, the balance of power between the characters of Rick and Holly is objectively not that different from TV series to film. In the show it's a parent/child relationship, in the film it's a teacher/student relationship, in both cases its a relationship where Holly is subservient to Rick's greater knowledge and experience and while Holly is obviously an adult in the film, the film also makes a point that she looks up to Rick to a degree that verges on the worshipful.

For another thing, after establishing Holly as someone who sees Rick as the center around which she wishes to orbit, the film makes a point of overtly sexualizing her in just about every scene. Whether it's Will making crude sexual comments about her, or the running gag of Cha-Ka (a primate creature played by Jorma Taccone who becomes part of the group after the human trio rescue him from being killed) grabbing her breast, or her decision after arriving in the other dimension to forgo the pants and long sleeves she's wearing in favor of short shorts and a tank top, the film is bluntly determined to make it clear that her purpose in the story is wildly different from that of either of the main male characters, or even that of the pseudo-male character Cha-Ka. What I mean by this is that while Holly is "with" Rick and Will in the sense that all three of them end up in the alternate dimension together, she's not "like" them as far as the story is concerned; her value is markedly different. For example, there's an extended sequence in which Rick, Will, and Cha-Ka get stoned and bond and it acts as an equalizing experience in that pompous Rick finally starts to see Will and Cha-Ka as friends rather than subordinates. While this is happening, Holly is being kidnapped so that Rick will have an opportunity to rescue her, proving his heroism and getting to kiss the girl. The point is, Will and Cha-Ka are companions and "people" just like Rick, while Holly is just a symbol of Rick's virility (because if Holly is constantly being associated with sex/sexuality and she wants Rick, then it follows that he's sexually desirable, a status which he achieves without being objectified by it because Holly is objectified for him) and his reward for proving same. Aside from being annoying, it's all downright weird given the premise of the original that the film has adapted and how the whole point of something like this is to attract audiences familiar with that original premise.

This isn't the only problem with Land of the Lost, and certainly it's not the reason why it failed given that plenty of movies have made money while affording female characters little in the way of agency. If I had to pinpoint where the film went wrong in terms of its ability to attract an audience, I would come up with two answers. The first is that studios vastly overestimate how much people want to see movie take offs on old TV shows. For every 21 Jump Street or Mission: Impossible or, to go way back, The Fugitive, there's Miami Vice, The Man from U.N.C.L.E. and Bewitched (which also, of course, starred Ferrell). Very few TV to movie transitions have resulted in blockbuster level success, but the thinking appears to be that familiarity with the old property will do most of the work in terms of getting people to the theater (even if you've completely changed the tone and characters in the transition), and that recycling what was successful in the past and in a different medium will mean avoiding the one thing that Hollywood hates the most: the completely uncharted territory of an original idea. Why make a good original movie whose success can't be predicted at all when you can make a mediocre rehash that allows you to assume a certain baseline success based on what's worked before?

The second is that the film casts Ferrell in the role of straight man - as much as a film this silly can be said to have a straight man - which hasn't tended to be his position of greatest strength in film. This isn't to say that Ferrell can't successfully play it straight, I just mean that his most financially successful films (with the exception of The Other Guys, where he plays it so straight that it becomes the comic centerpiece) have found him dialed up rather than dialed back. Those are the two things that I believe went wrong with the packaging. As for the actual product, it's easy to see why it couldn't capture that elusive "word of mouth" that brings audiences in later but stronger: it runs for 102 minutes without a story ever materializing. It has threads that might be sewn together into a plot - there's the human characters' search for the machine that will take them home, there's an alien who warns of a plot to conquer Earth but may not be on the up and up - but it mostly just meanders around, aimless, riffing as it spins its wheels and never getting anything into gear. There are bits and exchanges in Land of the Lost that are funny, but they work in isolation rather than as part of a greater whole. Land of the Lost just doesn't amount to much, unless you have something against Matt Lauer and want to see him get his comeuppance (Spoiler? No, just one of the many random bits spread throughout the movie).

Should It Have Been a Blockbuster?: Nah
Posted by Norma Desmond at 8:00 AM

This movie failed on so many levels, starting with how it alters the premise and tone of the show. That worked for the Jump Street movies, but has failed most other times, as you alluded to. Though I maintain that Miami Vice is an underappreciated film. The biggest issue is that regardless of how much it's alike or different than the show, it just isn't funny.

This is very true. I'm pretty sure I laughed once or twice while watching it, but I honestly can't remember what I laughed at, which means that even when it did manage to be funny it was funny in a way that's totally forgettable.