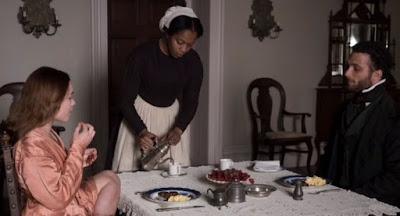 "Aren't you bored, Katherine?" Man, is he ever going to regret asking that question, because yes she is and her quest to not be bored is going to ruin everyone. Loosely adapted from Nikolai Leskov's novella Lady Macbeth of the Mtsensk District, the film transports the action to Victorian era England, but approaches it with a sensibility that is not only thoroughly modern, but intensely relevant. Built around a stunning and sharp-edged performance by Florence Pugh, Lady Macbeth is a film that upends expectations and becomes increasingly enthralling as it winds its way towards a conclusion that is perhaps inevitable, but savage nevertheless. The feature debut of director William Oldroyd, Lady Macbeth is a wonderfully confident debut that succeeds thematically where many films have failed.

The film begins with the marriage of Katherine (Pugh) to Alexander Lester (Paul Hilton), a union which is over as soon as it begins. Forced into the marriage by his father, Boris (Christopher Fairbank), Alexander has nothing but contempt for his wife and refuses to touch her, though Boris will place the blame for their inability to conceive a child on Katherine's shortcomings as a wife. Isolated in northern England and told that she's not allowed out of the house, Katherine quickly becomes bored and spends much of her time asleep, angering her father-in-law who apparently believes that she should be doing something even though she's been explicitly disallowed from doing anything. When first her husband and then her father-in-law leave the estate on trips of indefinite length, Katherine is left to run the household and, upon getting a taste of this freedom and power, becomes increasingly ruthless in her attempts to hold on to it.

Adapted by Alice Birch, Lady Macbeth feels, at first, like any number of feminist-leaning films that are set during decidedly unfeminist periods in history. It sets itself up to be the story of a woman, sold like chattel to be trapped in a loveless marriage to a man who thinks of her as his property, who finds a way to claim agency over herself and her life in order to fight back against a patriarchal system, but it very quickly becomes something much more challenging, much more thoughtful, and surprisingly intersectional. It does this through the inclusion of people of color, so often erased entirely from the "costume drama" genre except when it comes to stories dealing with slavery, three of whom end up being the keys to the narrative. One is Sebastian (Cosmo Jarvis), one of the workers on the estate who Katherine meets when she finds him and the other men taking a break from their work and amusing themselves by sexually humiliating (and, though it isn't explicitly stated, likely sexually assaulting) one of the housemaids. Despite his roughness, Katherine is instantly attracted to Sebastian and they have an affair. While Katherine is not "Lady Macbeth" in the sense that she is pursuing her legal husband's ambition, it might be argued that she's pursuing the ambition of her chosen husband (Sebastian), whom she would like to bring up in the world. Ultimately though, and for all her declarations to Sebastian, Katherine's ambition is really her own and it's power for herself that she's pursuing.

The second character is Anna (Naomi Ackie, giving a tremendous performance of despair slowly unfurling), the maid found in the barn. Anna is the witness to Katherine's ruthless ambition and she becomes its most consistent victim, too. Anna knows what has happened in the house during the period of the master's absence, but Katherine dismisses Sebastian's concerns, telling him that Anna won't say anything. This turns out to be true, but it's not a matter of sisterly solidarity. Instead, Anna's silence is merely a sign of her condition in this highly stratified society. At a glance, it appears that Anna has power, insofar as knowledge is power. In practice, however, her knowledge is meaningless as an advantage. There is a scene after Boris' return when he requests wine with dinner and Anna discovers that Katherine has imbibed all of it. When she returns to the dining room to tell him that the wine is gone, he asks what happened to it and Katherine (who, it should be noted, has gotten herself magnificently drunk before even entering the room, giving the scene a darkly comic tinge) levels her with a look that says, essentially, "I dare you." Anna knows that if she says that it was Katherine, all Katherine has to do is deny it, and although it should be (and probably is) obvious even to Boris who the culprit is, if it comes down to the word of Anna (black and a servant) versus Katherine (white and of a high enough social station to be married to his son), it's Katherine's word that he'll accept. The only reason he's really even asking who drank all the wine is because he wants to punish someone and when Anna can't name Katherine, she has to accept the blame and the humiliating punishment herself.

The third character is one I'd rather not reveal, as it would spoil a twist that upsets the balance of power that Katherine takes it for granted has been achieved, but I will say that the presence of this character and what happens to them (and then what happens after that) just underscores what the film has been doing all along. This is a story about a white woman who pursues power at the expense of the black people around her, using them, discarding them, and allowing them to suffer the consequences of her actions as she needs from time to time. What this film dramatizes so well is something that we're struggling to grapple with and understand as a society: that privilege and disenfranchisement are not linearly arranged, allowing the struggles of one group of people to be measured directly against those of another group of people, but instead exist as something that's more akin to a nesting doll, where privilege exists in layers. As a woman, Katherine is at a disadvantage in a society in which legally she's not even considered a "person," but she's also white and wealthy, which means that whatever disenfranchisement she faces, she faces it within the circles of these privileges. She has advantages that she can and does use, while Anna, who has neither whiteness nor wealth, has no such defenses. Anna's standing is so low that it doesn't matter what she does or what she says, the buck is going to keep getting passed down the line until the last stop, which is her.

There are beats in Lady Macbeth that, in another film, would be the places where you might be expected to cheer as Katherine seizes power and strikes a blow against the system and people that oppress her. Instead the film shifts to make it clear that her victories have come at a cost to those around her who are more disadvantaged than she is and to force to audience to acknowledge Katherine's selfishness and her unwillingness to see the consequences of her actions on others (Oldroyd is greatly assisted in this respect by the fact that Pugh is completely game for making the character seem as vicious as possible). Lady Macbeth is an unforgiving film in many ways, building suffering upon suffering on the supporting characters and looking with a merciless gaze upon its protagonist, but it's a terrifically satisfying one. It's a film as rich as its production design is austere. I greatly look forward to seeing what each of Oldroyd, Pugh, and Ackie do next.
Posted by Norma Desmond at 8:00 AM