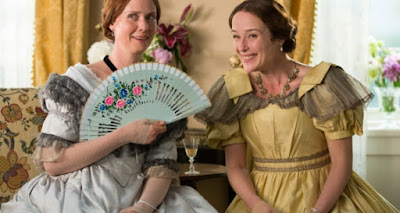 A Quiet Passion is one of those curious cases where the critical reception and the audience reception are so disparate that it almost seems like the two groups saw a different film. This is most apparent in its Rotten Tomatoes score, which earned 92% from critics, but only 50% from audiences. I can understand both positions. I can see how the great central performance from Cynthia Nixon and the film's meticulous craftsmanship would appeal to critics, and I can fully understand how the languid pacing, mannered style, and plotlessness of the film would have little appeal for audiences. At times I found the film quite engaging, but at other times I was honestly a little bored by it, so it's a bit of a mixed bag to be sure.

The subject of A Quiet Passion is Emily Dickinson and writer/director Terence Davies takes an elliptical "here's the whole thing" approach to the biopic, starting with a young Dickinson (Emma Bell) on the verge of leaving Mount Holyoke and then carrying on her story up to her death at age 55. Bell's Dickinson anchors the film's first 30 or so minutes, establishing her outspoken personality and her relationships with her family - father Edward (Keith Carradine), mother Emily (Joanna Bacon) and siblings Austin (Benjamin Wainwright) and Lavinia (Rose Williams) - before transitioning (quite literally, in one of the film's more visually arresting sequences) to the older versions of the characters, with Nixon taking over as Emily, Duncan Duff taking over as Austin, and Jennifer Ehle taking over as Lavinia (Carradine and Bacon remain in their respective roles). From here the film sort of floats through events and relationships of Dickinson's life, showing her as a lively and socially engaged woman in her youth who becomes increasingly isolated later in life as loss begins to wear at her and illness begins to take its toll.

Although Dickson's poetry plays a prominent role throughout the film by way of Nixon's voiceover recitation of various poems (including "Because I could not stop For Death," which appears at the end in a way that's a bit on the nose), A Quiet Passion is slightly less concerned with Dickinson's writing than it is with her familial bonds, making this seem at times more like a family drama than a biopic. It centers on the close-knit relationship between the Dickinsons, which Edward dominates until his death, so much so that when the American Civil War breaks out and Austin wishes to do as he expects every other man his age will do by enlisting, Edward explicitly forbids it, reducing his adult son to tears (if you find yourself feeling bad for Austin when this happens, rest assured that by the end of the film you won't feel bad for him at all). This isn't to say that Edward is depicted as a tyrant - the early stretch of the film is filled with warmth, with the members of the family clearly holding each other in high esteem - just that he's very much the head of the family.

A Quiet Passion is a film that can essentially be divided into two parts - not as "younger cast" and older cast as you might expect, but as comedy and drama, with Edward's death being the real dividing line. While Edward is still alive, the film plays out as something akin to a drawing room comedy, with characters exchanging witticisms and navigating society. After he dies, which prompts Emily to withdraw entirely into a life of seclusion, it becomes pretty strictly dramatic, with more people dying as the years pass and with family relationships (particularly that between Emily and Austin) becoming increasingly strained. This shift in tone is not what makes A Quiet Passion a divisive viewing experience; if anything the transition is achieved elegantly and gradually. If I had to pinpoint what makes it an occasionally hard sit, I would chalk it up to the overtly mannered style of many of the performances and the shapelessness of the story, the latter of which leaves the viewer with little to hold them to the narrative.

At the same time, A Quiet Passion also has many strengths, chief among them Nixon's performance as Dickinson, bringing to life her sharp intelligence and quick wit. While the film isn't interested in participating in the fascination with Dickinson's sexuality, alluding briefly to the modern rumors about Dickinson's relationship with her sister-in-law, Susan (Jodhi May), but opting not to explore it, it is keenly interested in the quality of Dickinson's loneliness. There's a sense of longing to Nixon's performance, not for any particular companion necessarily but merely for a kind of companionship, which is mixed with a strong independent streak and a sense that while she's a lonely person, it's her choice to be lonely. It's a sense that she has accepted certain things about herself and that, rather than trying to change those things, she'll just make do with what she has, even as it becomes a life that is increasingly isolated and confined. I'm lukewarm on the film itself, but I would recommend it just to see Nixon's performance, which is fierce and funny and moving, and altogether wonderful.
Posted by Norma Desmond at 8:00 AM