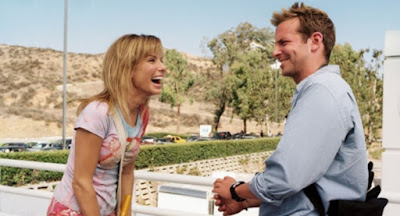 2009 was a year of extreme highs and extreme lows for Sandra Bullock's career. The highs came in the form of The Proposal, her first big box office hit since 2002's Two Weeks Notice, and The Blind Side, which would become the 8th highest grossing movie of the year and win her an Oscar. But in between those two triumphs came All About Steve, one of the worst reviewed movies of her career and one of its lowest grossing. But Steve was not just a financial disappointment, nor was it a movie that people simply disliked. People hated this movie so much that you would think it ran over their dog. Critics were vicious. The Golden Raspberry Awards gave it five nominations, including Worst Actress, which Bullock won (and, because she is an incredible sport, collected in person) the day before winning her Oscar. I'm not about to launch into a defense of All About Steve, but I am going to say this: that level of hatred is undeserved and I think the level of critical drubbing it took is more the result of a fundamental misunderstanding of who the main character is and what the film is about than it is a reflection on the actual worth of the film itself.

I'll start by saying this: I believe that if All About Steve were released today, critics would take a much different approach to reviewing it. I'm not saying they would like it necessarily, but I think they would take a somewhat gentler tone in how they discussed the protagonist. I say that because it was clear to me within moments of the film starting that Mary (Bullock), a crossword puzzle creator whose defining traits are her ability to develop unwavering fixations on things, her inability to pick up on social cues, and a heightened social awkwardness, is on the Spectrum. Here are some of the ways that reviewers in 2009 described her: "tediously kooky," "delusional, demented," "clearly and buoyantly [abnormal]... insufferable... nutball," a "thoroughly off-putting, unhinged character," "a malfunctioning verbal fun machine," "a strange child-woman with a head full of 'useless' knowledge and an inability to talk to people, much less connect... borderline unhinged," "deranged... mentally ill, psychologically unbalanced." Many reviews simply call her "crazy" and/or some variation on "annoying," and most refer to what she does in the film as "stalking." Nathan Rabin's review for The A.V. Club goes all out in its desire to rip the character apart, describing her as a "Manic Pixie Nightmare woman... a protagonist so profoundly irritating that even her loved ones barely tolerate her... a sentient encyclopedia on a crystal-meth binge... insufferable flibbertigibbet" and describes her existence as a "sad, sour little life."

So, three things: 1. Perhaps Autism, Aspergers, etc. were less widely discussed/understood in 2009 than they have been in more recent years, but one of the interesting things about reading the reviews of the time is that several reviewers picked up on the signs but display a misunderstanding of what they mean, often crediting Mary's behavior/characterization to an overzealous screenwriter striving to up the "quirk" factor in the belief that a female character being intelligent isn't enough. I'm honestly at a loss as to how one could watch this movie and see Mary as simply "quirky." 2. I'm not entirely sure what crawled up Rabin's ass when he wrote his review (and I say that as someone who is generally a fan of his writing), but he's wrong to call Mary's "a sad, sour little life." It's only "sad" if she's unhappy but, the fact is, Mary is happy with it. A person whose brain is wired to engage with the world in a different way might not be happy with it, but Mary likes her job, she seems perfectly happy with her living situation (a point of contention for most of the people she meets, since she's an adult living with her parents), and though she doesn't have anything resembling a social life at the beginning (nor does she seem to want one), she makes friends during the course of the film. She likes and is fulfilled by her life and isn't that, by definition, the opposite of a "sad, sour" existence? 3. Although the film acknowledges it as such in its closing voice-over, I'm not entirely sure that what Mary does actually qualifies as "stalking."

Yes, after going on one blind date with Steve (Bradley Cooper), which lasts approximately five minutes before he decides to flee from her, Mary dedicates a crossword puzzle to him, which is not just an odd thing to do but leaves her readership entirely baffled and results in her being fired. She also follows Steve, a news cameraman, out of town to the location of his latest story, but she does this because she genuinely thinks that he's invited her to do so. This is the result of him trying to extricate himself from the date graciously and her taking for granted that the words people say are representative of what they literally mean, because that's the way her brain works. When she goes on to follow Steve around the country to multiple other locations, it's because she has been explicitly invited to do so by Steve's jackass friend, Hartman (Thomas Haden Church), a news reporter who thinks it's funny to freak Steve out by having Mary show up everywhere they go. To me, that suggests that Mary is less a stalker than she is the victim of someone who is having a laugh at her expense by exploiting the difference in the way that her brain processes things.

Contemporaneous reviews seemed to view All About Steve as a story about a delusional woman chasing a man who has rejected her and making him miserable. Seeing it in 2017, having never seen it previously, it struck me as very much a story about a woman who engages with the world in a different way than most people do, whose enthusiasms are met with exasperation and impatience by others, and who is sometimes treated with cruelty by others. In addition to Hartman baiting her into crashing location after location, people are constantly mocking her for her living arrangements and (for some reason) her boots, and there's a scene where Mary is on a bus talking away to people that she doesn't realize are irritated by what she's doing and the driver finally pulls over, pretends that the passengers are getting a five minute rest break, and then speeds away after Mary steps off, to the cheers of all the other passengers. Although it's sometimes hard to tell whether the film is laughing at her or with her, I would argue that the film ultimately has affection for her seeing as her pursuit of Steve merely ends up being the catalyst for her finding her "people," others who see the world in ways similar to how she does and who embrace the things that other people reject in her. In the end, I truly believe that that is what the film is meant to be about: a person who is different finding acceptance and support. Mary finds that acceptance, while characters like Steve and Hartman realize that they haven't exactly behaved with kindness.

None of this is to say that All About Steve is a good movie. I didn't laugh much, and seeing as it's meant to be a comedy that's kind of an important thing. I did laugh at something nearly all the reviews I read pointed out as one of the things they felt make this movie terrible, namely the bizarre scene where a group of deaf kids runs across a field and ends up falling into an abandoned mine, but I laughed because it was so out of left field and random seeming and because I just watched the new Wet Hot American Summer series and a scene like that feels like it would not be out of place in that universe. In addition, the narrative is really ramshackle and the way that the film/Bullock characterize Mary is sometimes turned up way higher than it needs to be. But, still, none of this makes All About Steve anywhere near the worst movie ever made (it's not even the worst movie in either of Bullock or Cooper's filmographies) and the amount of vitriol it inspired is wholly disproportionate to its actual failings as a movie.

Should It Have Been a Blockbuster?: I mean... let's not get crazy now
Posted by Norma Desmond at 8:00 AM