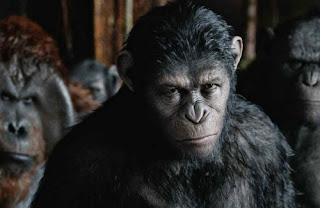 #10: Andy Serkis, Dawn of the Planet of the Apes
There will eventually come a day when motion capture performances are embraced as deriving from as legitimate an artistic space as life action performances. Until then Andy Serkis will continue to give wonderful, amazingly nuanced performances that challenge the notion of a motion capture performance as little more than the act of providing a frame over which to drape CGI. As Caesar, the evolved chimpanzee who provides the bridge between the declining human race and the ascending apes, Serkis is the soul of Dawn of the Planet of the Apes (and its predecessor). Both drawn to and repulsed by humans due to his previous experiences with them, Caesar fights not only with himself, but with the other apes in the community, driven by his desire to create the best possible world for his children to live in. Serkis brings the perfect mixture of confidence, wistfulness, regret and hope to the performance, and in the process makes a chimpanzee one of the most "human" characters to grace the screen in 2014. 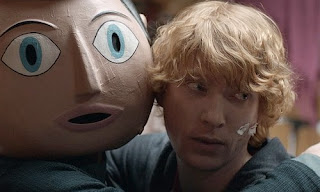 #9: Domhnall Gleeson, Frank
Late in Frank there is a scene in which Domhnall Gleeson levels Michael Fassbender's Frank with a look of such pure hatred that not only is it startling, but it throws everything about Gleeson's character into sharp relief. For much of the film, the performance is overtly comic as he plays a guy who appears to be clueless but ultimately innocuous, a dreamer who wants to make a living as a musician and songwriter and stumbles into a position with a band. He is embraced by the band's leader but treated with derision by the rest of the members of the group, and for a while you feel sorry for him because he's trying so hard to be liked and he keeps being rejected... but then. Then Gleeson begins to provide glimpses of the real guy behind the exterior, a man who is something of a parasite, the kind of person who would pursue his own gain by exploiting, isolating, and pushing to the breaking point a man who is clearly mentally ill, a guy who is out for himself and doesn't want to be an artist so much as he merely wants to be famous. While Fassbender provides the film with much of its emotional core, Gleeson provides it with the heady mix of comedy and darkness that makes it so memorable. 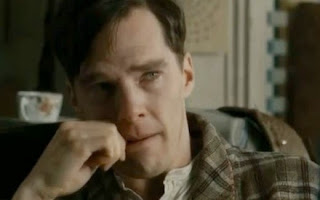 #8: Benedict Cumberbatch, The Imitation Game
As conceived by The Imitation Game, Alan Turing is a man who has more in common with the computer he creates than with the human beings who surround him, and yet, as portrayed by Benedict Cumberbatch, he remains a person of breathtaking humanity. Seemingly unable to speak the emotional language that comes easily to others, and having grown into a man who may come across as cold and detached, perhaps even self-centered, he is merely lacking the means of expression rather than the ability to feel deeply, and beneath the hard surface lies a great deal of fragility. The nature of the character means that Cumberbatch must spend much of story turning inward, fighting against the inclination for a big emotional moment in favor of something quieter and more subtle, but he manages to turn the interiority of the character into asset, delivering a finely tuned character study of a man isolated by how impossible it is for him to connect with others. 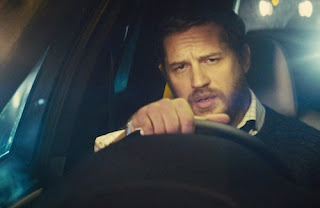 #7: Tom Hardy, Locke
A lot of actors would probably love the opportunity to star in a movie that consisted of nothing but their face on screen for the entirety of the story's running time. Few could actually pull that off. Tom Hardy, a man built like a brute but capable of great emotional delicacy, is absolutely riveting in Locke, playing a man experiencing a dark night of the soul as he takes a long drive towards the woman about to give birth to his child, and away from the wife and family he clearly loves. It's a performance marked by incredible restraint as Hardy attempts to mollify various people in his life as he speaks with them on the phone, trying not to succumb to the regret and despair he feels for the pain that he's caused those around him and trying to provide comfort and reassurance to those disembodied voices. While Locke ends up feeling like an experiment that hasn't quite come off, Hardy's performance is nevertheless a wonder. 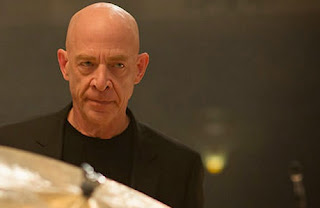 #6: J.K. Simmons, Whiplash
When film critics groups around the US started giving out their awards at the end of 2014, one name that came up again and again (and again and again) was J.K. Simmons for his role as the abusive teacher/mentor in Whiplash. There's a reason for that: it's a performance which simply will not be ignored. While the volcanic intensity of many scenes is what one most immediately remembers, what makes the character so effective is the way that Simmons is able to pull him back, to make him seem, at times, warm which in turn allows him to get past the defenses of his victim and make the victim feel as though he ought to keep working for his approval. The character is a master manipulator and Simmons' performance is so deep and nuanced that even after you see the emotional, psychological, and sometimes physical violence that he's capable of, you still find yourself wondering if maybe, just maybe, he isn't just a sadistic prick and really does have good intentions. As villains go, Simmons has created one that inspires an incredibly emotionally complicated reaction which provides the film with great psychological depth. 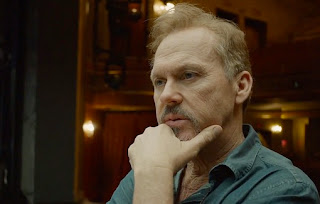 #5: Michael Keaton, Birdman
Birdman is a high wire act from beginning to end, built around a story telling strategy that lends it a natural sense of urgency and intensity. As the man at the center of that story, Michael Keaton meets the film note for jazzy note. In a film which relies, in part, on the audience's association of Keaton with his Batman films, Keaton displays no vanity and instead throws himself completely into the role of an actor past his prime and trying desperately to hold on to some form of cultural relevance, taking the character to some incredible, embarrassing lows and some exhilarating, unbelievable highs. Keaton has kept a low profile as an actor for a while now and, if nothing else, Birdman is solid proof that despite that he remains one of the most versatile and electric performers working today. 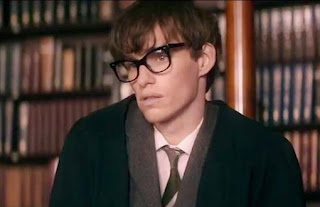 #4: Eddie Redmayne, The Theory of Everything
Whenever I think back on this performance, I'm reminded of how easily it could have gone all wrong. On paper, after all, this exactly the type of role that is routinely mocked as an "Oscar role," something bluntly performative, mawkish, and providing the actor with a physical ailment that becomes the crutch of the performance. That's not what happens with Eddie Redmayne as Stephen Hawking in The Theory of Everything. Though he is called upon to give a performance that emphasizes the character's physical difficulties, it is not a performance that becomes defined by those physical limitations. Even as the performance becomes increasingly physical and decreasingly verbal, he always manages to push the humanity of the character through, never letting the man become absorbed by the ailment. It's a performance of great sensitivity, sly humor, and above all emotional resonance. He isn't "playing" Stephen Hawking here; he is Stephen Hawking. 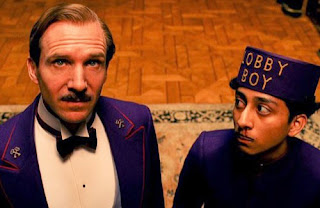 #3: Ralph Fiennes, The Grand Budapest Hotel
Ralph Fiennes is an excellent actor but, like most actors, he's generally associated with certain types of characters, in his case characters who lean heavily towards the drama scale of the spectrum. It's not that he's never done comedy before, but that even when he has he's never seemed quite as playful and loose as he seems here. If he felt any strain stepping into Wes Anderson's world and becoming a part of it (and I imagine that one would, as Anderson's vision is so complete down to the finest detail that actors know they will have to bend to it, rather than trying to get it to bend to them), it never shows. Playing a character whose silliness never disturbs his inherent dignity, and striking a tone somewhere between deadpan and madcap, Fiennes delivers a masterclass in comedy that demonstrates that the more effortless a comedic performance seems, the more skillful it actually is. 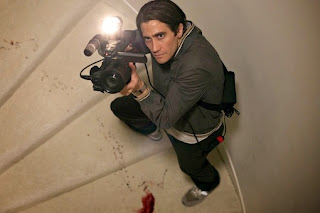 #2: Jake Gyllenhaal, Nightcrawler
The first thing one notices about Jake Gyllenhaal in Nightcrawler is his severely altered appearance. However, while the physical transformation that renders him almost insectoid in aspect, giving him a creepy crawly look that gives new meaning to the title, is an important part of the characterization, it's also ultimately a secondary one. This is a performance built on attitude, on the way that the character has absorbed and distilled self-help, motivational speak and repurposed it for his own ends, on how he doesn't so much fail to pick up social cues as ignore those that don't fit with his goal in any given interaction, on the unshakable confidence, impenetrable narcissism, and inconceivable ruthlessness of Louis Bloom. Not only does Gyllenhaal manage to turn in a performance that is sometimes frightening in its intensity, it is also a performance that is deeply, darkly funny and Gyllenhaal taps in to that comedic aspect in the performance without ever making it seem like the character is in on the joke. 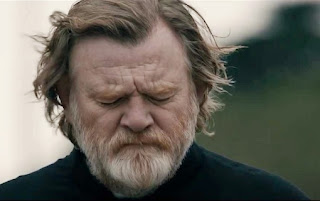 #1: Brendan Gleeson, Calvary
As a priest who is informed in the film's opening scene that he's going to be assassinated by one of his parishioners, Brendan Gleeson is put through the wringer in Calvary. Playing a good man struggling to do right by the people around him, even when those people treat him with distrust and contempt, and trying to uphold and defend the values of his religion even as he's forced to accept responsibility for the corruption and evil that has taken root within the institution, he cycles through virtually every emotion known to man between the opening and closing frames of the film. Plenty of actors have played characters who act as "Christ figures," but few have brought as much nuance, as much gentleness and passion, or as much strength (and not the indestructible kind that exists only in stories, but the kind that at times falters and gives way to doubt, the kind that is inherently human) to it. Gleeson is a consistently excellent actor, and often so subtle in what he does that it's easy to overlook that he's doing it - it's just there, a part of the fabric of the film's existence - but just because he won't call attention to himself, doesn't mean he's not deserving of the attention. This is a great performance.
Posted by Norma Desmond at 8:00 AM

I've only seen the work of Serkis and Fiennes from your list. I think Serkis is the better of the two and don't find it particularly close. That said, can't wait to catch up with the rest of the guys and their performances.

Oh, but Fiennes is so divine in The Grand Budapest Hotel. The rest of the performances are definitely worth the look.