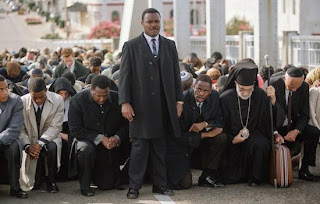 Having now seen Selma, I am genuinely baffled as to how it is that there are people walking away from the film concerned about whether or not Lyndon B. Johnson is portrayed fairly. If that is your main takeaway, then I'm sorry but not only have you missed the point of this film entirely but in certain respects you've also proved the point of this movie by tacitly admitting that you're only willing to engage with it by way of a "white savior" narrative. If you're concerned about Johnson's legacy, then by all means come out of this film outraged at what has become of the Voting Rights Act of 1965, but if your concern is that Johnson is depicted as a politician who was willing to confront the issue of racial inequality but only wanted to do so at a time when it would be less politically inconvenient for him, then please give your head a shake and maybe ask yourself why that matters so much. The movie isn't about Johnson, after all, but about the experience of the people most intensely affected by racial inequality and how, only fifty short years ago, they were still being forced to fight for their simple right to human dignity, let alone the ability to exercise their right to vote. That despite how powerful, moving, and artful this film is, so much of the discussion it has provoked seems to center around how Johnson is portrayed pretty much says it all regarding how far we have not come as a society when it comes to issues of racism, particularly at the institutional level.

Selma opens in 1964, with Dr. Martin Luther King, Jr. (David Oyelowo) about to receive the Nobel Peace Prize with his wife, Coretta Scott King (Carmen Ejogo) by his side. In quick succession King is shown accepting his prize in Oslo, the 16th Street Baptist Church is bombed in Birmingham, taking the lives of four little girls, and Annie Lee Cooper (Oprah Winfrey) is shown attempting to register to vote and being turned away by the registrar. In response King meets with President Johnson (Tom Wilkinson), who would be content to rest for a bit on the laurels of the passage of the Civil Rights Act and is reluctant to shake things up further by passing legislation which would assist black citizens in becoming registered voters. Unable to sway the President into action and knowing that the time to act is now rather than at some vaguely defined later date that Johnson offers, King travels to Selma, Alabama, with Andrew Young (Andre Holland), James Orange (Omar Dorsey), and Diane Nash (Tessa Thompson) in order to meet with Reverend James Bevel (Common) and other SCLC activists to organize a march through Selma. The march ends with a peaceful protest in front of the town hall that is met with brutality by the local police, who arrest all the participants, including King. While King cools his heels in jail, Coretta meets with Malcolm X (Nigel Thatch), who approaches her with an offer of assistance despite the very public differences in opinion between himself and King. King is displeased when he learns of the meeting, though not nearly as angry as Johnson is when he gets wind of it and believes the two civil rights leaders might be teaming up, as he views King as the preferable, "safer" alternative (from an institutional perspective) to the more incendiary Malcolm X.

Released from custody, King and his group plan a bigger demonstration in the form of a large scale march from Selma to Montgomery, while the FBI attempts to discredit King by attempting to break up his marriage, and Alabama Governor George Wallace (Tim Roth) makes plans to violently shut down any attempts to complete the planned march. King does not participate in the first attempt at the march, delegating leadership to Hosea Williams (Wendell Pierce) and Amelia Boynton Robinson (Lorraine Toussaint) and the chairman of the Student Nonviolent Coordinating Committee, John Lewis (Stephan James), and the result is a veritable bloodbath as the marchers attempt to cross the Edmund Pettus Bridge and are showered with tear gas and beaten with clubs wrapped in barbed wire and whips. This show of force, however, has the opposite effect to that which was intended as the police's brutal suppression of demonstrators not only makes King and his group more determined to carry on with their mission, but galvanizes people around the United States who might otherwise have seen the civil rights movement as not being their issue and who converge in Selma to participate in the next march. As violence against demonstrators continues to occur, King finds himself in a form of stand off with Johnson, with Johnson urging King to call off the march to protect his followers and King reasoning that Johnson could bring an end to it himself by signing the Voting Rights Act into law.

As with any true story, Selma, which was written by Paul Webb with an uncredited rewrite by director Ava DuVernay, takes some liberties with the facts in order to form history into a clean, streamlined narrative. For instance, the film presents King's Nobel Peace Prize and the church bombing as being concurrent events when the bombing actually occurred in 1963, and it depicts Annie Lee Cooper as being beaten by the Selma police after pushing Sheriff Jim Clark to the ground in defense of fellow activists Jimmie Lee Jackson (Keith Stanfield) and his grandfather Cager Lee (Henry G. Sanders), when in reality Cooper punched Clark in the face after he prodded her in the neck with a billy club. Do these liberties take anything away from the film? Absolutely not, and neither does the film's depiction of Johnson as a politician who, perhaps pragmatically, would prefer not to deal with the hot button issue of race relations in an election year. Selma is about how the movement looked on the ground, not how it looked from the vantage point of the Presidency, and though various political maneuverings do play a role in the story, the story's main thrust is about how people without institutional power effected change through their actions, their endurance, and their willingness to sacrifice.

In telling the story, DuVernay does not attempt to portray King as a saint or as perfect. He is, above all, just a man and as flawed as all human beings are, and the film and Oyelowo's outstanding performance keep him to that human level (in that respect the film not having the King estate's permission to use his actual speeches is a blessing because in the absence of those speeches the film avoids taking on the mythological quality of the "great man" story). As played by Oyelowo, King is a man with a calling and a clear sense of purpose (though he at times has doubts about how to achieve that purpose), both of which weigh heavily upon him as his attempts to effect change yield violent reactions ranging from threats to his family to beatings and sometimes murder of his followers. Selma is not an explicitly violent film, insofar as it does not fetishize blood and gore, but the way that DuVernay stages and stylizes incidents of violence achieves maximum impact, rendering them with a startling and intense intimacy. The story of the voting rights marches are naturally moving, but the power of Selma as a result of how DuVernay tells this story cannot be overstated. This is a great movie that cuts right to the core.
Posted by Norma Desmond at 8:00 AM

Excellent review. That it keeps King at that human level is, for me, the movie's greatest strength. It's what keep it from a simple recycling of things we've already heard about, read about, or saw in some other capacity.

Thanks. I agree about the not recycling things, mistaking stringing "facts" together for a proper narrative. Selma does right what so many biopics do terribly wrong.