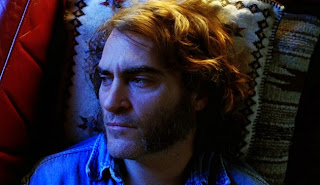 If I had to compare Paul Thomas Anderson's Inherent Vice to any other movie, it would be Howard Hawks' The Big Sleep. On the surface the two might not seem to have much in common, the former being a '70s set comic noir about a hippie P.I. who spends most of his time stoned, the latter being a classic '40s noir with an archetypal Bogart performance as P.I. Philip Marlowe; but the two films have a similar storytelling strategy, in that there are a lot of elements in both stories and none of them really matter. Like The Big Sleep, Inherent Vice has a plot that can be hard to follow, its many threads difficult to tease out from one another, and like The Big Sleep, not knowing exactly what's happening makes absolutely no difference when it comes to enjoying it because it's not actually about the story, but about the characters and the mood. Inherent Vice is a film about a vibe and it makes that feeling so palpable that even when you're lost in the haze of its narrative, there's still no place you'd rather be.

Set in 1970 in the fictional community of Gordita Beach, on the outskirts of Los Angeles, Inherent Vice opens with Doc Sportello (Joaquin Phoenix) receiving a late night visit from his ex-girlfriend Shasta Fay Hepworth (Katherine Waterston) "looking just like she swore she'd never look." Now instead of looking like she belongs to his casual, counter-cultural world, she looks more like a rich man's ornament which, as it turns out, she's become. She's come to Doc because she's gotten involved with real estate developer Mickey Wolfmann (Eric Roberts), whose wife and her lover intend to abduct him and lock him up in an insane asylum, and Doc agrees to help her foil the plot. Shortly thereafter, however, both Mickey and Shasta have disappeared and Doc is hauled in for questioning by wannabe actor/LAPD officer Bigfoot Bjornsen (Josh Brolin) on suspicion that he's involved in the murder of Glen Charlock, who was one of Mickey's bodyguards and who, coincidentally, Doc had also been hired to find, this time by Tariq Kahlil (Michael K. Williams). With the help of his lawyer, Sancho (Benicio Del Torro, in a charmingly sleepy performance), Doc slips out of Bigfoot's grasp in time to be hired for another job, this time by ex-heroin addict Hope (Jena Malone) who believes that her dead saxophone playing husband Coy (Owen Wilson) might not really be dead after all.

After checking in with his sort-of-girlfriend Penny (Reese Witherspoon), an Assistant District Attorney, Doc receives a message from Jade (Hong Chau), a prostitute who had helped set him up for Charlock's murder, warning him about the "Golden Fang." When he meets with Jade, who explains that the Golden Fang is a group that's been smuggling drugs into California, he also briefly encounters Coy, whom he later learns is a police informant who desperately wants out so that he can return to Hope and their young daughter. As he continues to look for Mickey and Shasta, Doc descends deeper down the rabbit hole, discovering that everything is somehow connected. He finds the corporate headquarters of the Golden Fang where he meets a dentist (Martin Short) whose clientele seems to be made up of drug addicts whose teeth have been ruined by the habit and who is involved with a young woman whom Doc once tracked down when she was a teenage runaway; he learns that a man with ties to the Golden Fang also has ties to Bigfoot; and he learns that though the FBI is making a show of looking for Wolfmann, they may actually know more about his whereabouts than anyone. But all Doc really wants is to find Shasta and extricate both her and Coy from the clutches of the Golden Fang and all those who are associated with it.

Anderson has become known for towering stories about men who become self-made myths (Daniel Plainview in There Will Be Blood, Lancaster Dodd in The Master), films that are tightly controlled in their storytelling and somewhat cold to the touch. In that respect, Inherent Vice, which is daunting for the way that it keeps stacking plot elements and characters atop plot elements and characters but nevertheless feels sort of loose and shaggy in its storytelling in a way that is befitting of its low maintenance, laid back protagonist, seems like a departure. But for all the overt comedy of Inherent Vice (and there is a lot of it), there's darkness in this story, too, which slips in as surreptitiously as Shasta slips back into Doc's life. Beneath the veneer of good times - the sex, drugs, and money, all of which seem to flow freely - is the ugly underbelly of exploitation, murder, and abuse that makes it all possible but which will also destroy it (the era itself is, in other words, subject to inherent vice). Inherent Vice is as epic as Anderson's previous works, it just doesn't appear that way at first because rather than telling a story that feels like a sharp rise and then a fall, it instead tells a story that feels like it's going around and around.

That round and round feeling, which might be interpreted as "meandering" or "self-indulgent" (I liked the movie, but even I found it somewhat self-indulgent... as pretty much all Anderson's movies are), probably means that the film will be divisive, inspiring reactions of frustration and appreciation in equal measure. If you can go with the film's peculiar and very particular flow, one which requires you to accept that you're not always going to know up from down and that you're going to have to take a series of ridiculous character names ranging from Japonica Fenway to Puck Beaverton in stride, then Inherent Vice has innumerable pleasures. Chief among them, certainly, are the performances, from Phoenix as Doc, who may be a round the clock stoner but isn't a dummy, to Brolin as Doc's chief antagonist, and Waterston as the fragile femme fatale. Inherent Vice may need time to find its audience, but I have no doubt that this gonzo treasure is destined to become a cult classic at the very least.
Posted by Norma Desmond at 8:00 AM

Wasn't even aware of this movie, but now it's a Must See. Thanks.