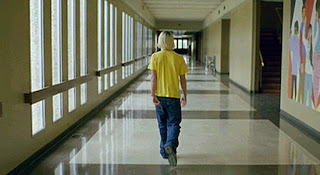 Gus Van Sant's Elephant is a film about the ordinariness that surrounds tragedy, how days that end marked by horror can still begin in typical fashion, the change occurring suddenly and altering everything forever. Released only four years after the Columbine massacre and centering on a school shooting that bears more than a passing resemblance to that event, the film inspired some heated reactions at the time of its release, with critic Todd McCarthy (then with Variety) denouncing the film as "pointless at best and irresponsible at worst." But though Elephant is a movie about a violent event, it presents that violence in a matter of fact way, without glorifying it, and without trying to explain the actions of the killers or even necessarily to understand why things like this happen. There's no understanding something like this, so Elephant merely acts as a witness - distanced, unemotional, observing events as they play out rather than attempting to guide them. In hindsight that's probably why the film inspired such intense reaction: answers are comforting; bald recounting of tragic events are not.

Elephant takes place over the course of one day, introducing several students who attend the same high school, each going about their business as usual. We meet Elias (Elias McConnell), who is working on a photography project and spends the day going around the school taking pictures of other students; Nathan (Nathan Tyson) and Carrie (Carrie Finklea), a popular couple; Brittany (Brittany Mountain), Jordan (Jordan Taylor), and Nicole (Nicole George), a trio of friends; Michelle (Kristen Hicks), an outcast who pops up often in the background of other characters' scenes; Alex (Alex Frost) and Eric (Eric Deulen), the two killers; and John (John Robinson), who is the de facto protagonist of the film by virtue of being the first character we meet and the one whose point of view the film continuously finds itself returning to. John begins the day with the realization that his father (Timothy Bottoms), who is driving him to school, is drunk, and then spends the morning trying to work out a way to get his dad home safely while simultaneously trying to reduce the embarrassment of his dad being at the school while intoxicated. It will be John who sees the killers first, decked out in combat gear and carrying a large bag full of weapons, as he's heading out of the school and they're on their way in. Though neither killer will show any mercy to anyone else, Alex warns John to keep walking and not go back into the building.

What happens once the killers get inside is where things get a bit tricky, and probably where a lot of issues that people had with the film are rooted. The killers have planned and prepared for their evil deed, and are shown carrying out their plan with ruthlessness and efficiency, but the film doesn't depict them as being a pair of invincible geniuses with a plan that couldn't fail. They walk into the school unnoticed and looking like they're about to go to war, have enough time to get themselves set up, and then they wait... and wait. The first stage of their plan involved propane bombs which were supposed to go off at a certain time and when that doesn't come off they stand looking at each other for a moment, sort of baffled and uncertain, and definitely not looking like the seasoned warriors they were trying to present themselves as when they set foot in the building. The "success" of their plan is ultimately depicted as being more a matter of luck - of no one except John seeing them, of John not being able to properly articulate himself to others as he runs around the outside of the building trying to warn people, of their being able to walk freely through the school to get themselves set up - than of skill. That can be easy to forget once the pair get going, gunning students down throughout the school, the power firmly in their hands, but it's true nevertheless. Their actions are coldblooded and depraved, but they're still just kids and no matter how pumped up they've gotten themselves, when reality fails to follow the scenario they've crafted in their heads they falter, even if only momentarily.

In depicting the massacre, Van Sant is frank but not sensationalistic. He shows victims being killed (and often merely shows the gunman taking aim, the victim just beyond the camera's view), but allows no stylistic flourishes that might make it seem like the act is being glorified in any way. The massacre sequence is very much about stripping away the conventions of movie language and, in doing so, stripping away the comfort of fantasy. Late in the film we're introduced to a new character. He strides through the empty hallways with a sense of purpose, going towards the chaos instead of away from it. Eventually he finds one of the gunmen and begins walking up behind him. Because countless movies have taught us to expect that this character (by which I mean the archetype this specific character is evoking) is going to bring the madness to an end, that he's going to overpower the gunman and act out a self-defense fantasy, we're briefly soothed into a false sense of security. That feeling of being brought back into line with film conventions, and then wrenched out again when the scene plays out exactly the way that it likely would in real life, both makes the scene itself more affecting and demonstrates what Van Sant is doing with the film as a whole - he's taking us out of the "movie" mindset, challenging the notion that real life acts such as this are the product of violent films by making the film as "uncinematic" as possible.

Elephant, which was the second entry in Van Sant's "Death Trilogy" (between Gerry and Last Days), is at once artful and artless. Scenes unfold in a casual manner with an improvisational feeling, but the film itself is meticulously crafted, structured so that certain moments are revisited over and over again, each time from the perspective of a different character. The tone is pitched at a deliberately low key, one which renders the first half of the movie monotonous, which has the effect of draining away any preemptive sense of urgency or tension that a viewer may bring to the film knowing what it's about so that Van Sant can recontextualize those feelings once the film is ready for them to be introduced. It's a strategy that may leave some feeling bored or frustrated, but it can also have a hypnotic quality if you're open to it and have the patience for it. Enough time has passed now that the initial feelings Elephant inspired have certainly cooled and it can be viewed on its own terms, separated from that early controversy. What remains almost 12 years later is a muted but ultimately effective film that offers no answers because it knows that even with all the answers laid out and everything neatly explained, no sense can ever really be made of an event like this. In its quiet way, Elephant remains a deeply powerful film.
Posted by Norma Desmond at 8:00 AM

Excellent review! I'd almost forgotten about this film. I thought it was excellent. I love what you said about it being frank without being sensationalistic.

I'd almost forgotten about it, too, but I sort of happened upon it by chance recently. It has held up very well over the years.