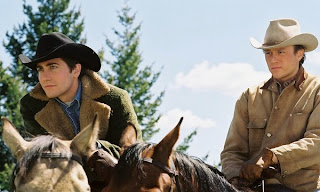 Almost ten years after the fact, Brokeback Mountain still somehow feels revolutionary. Though there have been movies with gay male protagonists in the years since that time – the most high profile arguably being the Best Picture nominated Milk - the continuing dearth of gay characters as romantic leads in big studio films means that Brokeback still seems like a rarity among rarities. In that respect, its impact on Hollywood was not equal to its notoriety, however, when you step away from all the outside social and political baggage attached to it, what’s left is a beautifully crafted masterpiece, a love story and a film that transcends any boundaries that might ghettoize it as a “gay movie” or otherwise as a work of limited or niche appeal so that it can be seen, simply, as a great movie.

Spanning nearly 20 years, Brokeback Mountain begins in 1962 with Ennis Del Mar (Heath Ledger) and Jack Twist (Jake Gyllenhaal) being hired to spend the summer tending sheep on Brokeback Mountain, where they will be in almost total isolation. With only each other for company, and free (so they think) from the judgmental gaze of the rest of the world, the relationship between Ennis and Jack progresses from discrete and longing looks to physical contact, each swearing to the other that they aren’t gay and that what happens between them is a situational thing, though the bond between them obviously runs deeper than that. When the job ends they go their separate ways, Jack returning to the rodeo circuit, Ennis going home to marry Alma (Michelle Williams), and four years pass. By now Ennis and Alma have two daughters and are barely scraping by on their combined incomes, while Jack has given up the rodeo after meeting and marrying Lureen (Anne Hathaway), with whom he now has a son, and taken a job selling farm equipment for his father-in-law’s company. Though both are content enough in the lives they’ve carved out for themselves, they realize when they come back into contact with each other that something essential has been missing. Having drifted back into each other’s lives, they find that they can’t let go and stay in contact for the next several years, which results in happiness and pain in equal measure.

Though the story centers on the enduring connection between Ennis and Jack, the film itself is haunted by an intense thread of loneliness. The landscape is open and empty, the characters are isolated and unable declare their feelings openly, and the most meaningful relationship is one that is forged reluctantly and kept alive through brief intervals of contact over the course of two decades. Ennis and Jack spend much of their time lonely for each other, but they are also, at all times, lonely for themselves and wounded by their inability to abandon a pretense that makes life all but unbearable for them. Jack is willing, perhaps idealistically, to go against the tide of society and try to make a life together in quiet openness, but Ennis, scarred by a violent memory from childhood, cannot be persuaded to anything more than what they already have, and so their relationship remains a major force relegated to the very margins of their lives. With Ennis and Jack occupying one of the most masculine of American archetypes, the cowboy, Brokeback Mountain is very much about popular conceptions of “masculinity,” and what emerges through this story is just how fragile that image is and how vulnerable it makes those struggling to uphold that ideal of strength. Ennis lives for what little time he has with Jack, but he is ruled by fear because society has dictated that being with Jack would be contrary to what it means to be a “man” and that if he ceases to be a man, if he undercuts what being a man is supposed to mean, then the only path that remains leads to violence, humiliation, and death. For as closed off as he is, Ennis is also incredibly exposed in that he lives his life entirely at the mercy of the world and the society around him.

Both Ledger and Gyllenhaal received Oscar nominations for this film and each delivers a performance of great depth and feeling, meeting each other strength for strength. Ennis is a man of few words, but as played by Ledger his silences speak volumes about his inner turmoil and the strain that he is under by trying to live one life on the surface, and another below that surface; while Jack, as played by Gyllenhaal, transitions smoothly from open, needy youth to weary and fed up middle age. The characters, and their dynamic, shift subtly over time but those changes are barely noticeable as you’re watching the movie because both performances (in addition to the makeup used to gradually age the characters) are so quiet and nuanced, not drawing attention to themselves but instead just digging deeper and deeper, finding further ways to flesh out the characters and the relationship between them.

Brokeback Mountain is an important work in the history of American film. It may not be as daring or as explicit as other gay themed movies from other parts of the world, but it was without question a watershed moment for Hollywood. What’s striking about the film now, however, is how director Ang Lee avoids presenting this as an “Important Movie” and instead keeps the focus tight and simple, treating it as an intimate story that asks the viewer to see its characters as human beings rather than symbols in an “issue movie” meant to teach them something about tolerance and progress. That core of humanity and pure emotion is why Brokeback Mountain resonates and why it has aged so well. It is a work of aching truth, of great beauty, and great sorrow, and it is one of the great movie love stories of all time.
Posted by Norma Desmond at 8:00 AM