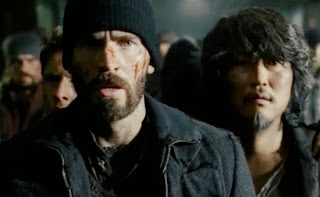 #10: Snowpiercer
Call it the little engine that could. Despite having to do battle with its own distributor (The Weinstein Company, continuing its strategy of eating its young), Bong Joon-ho's Snowpiercer emerged unscathed by the notorious Weinstein scissors and found an audience despite being cast adrift in its release. A story of dystopia set entirely in one location (a train hurtling around the frozen globe), Bong makes effective use of the inherent claustrophobia of the setting, giving the story a great amount of urgency that combines with the naturally kinetic energy of the narrative's video game-like structure that sees its heroes advancing one level at a time, one fight at a time, to make this one of the year's most entertaining and well-assembled films. 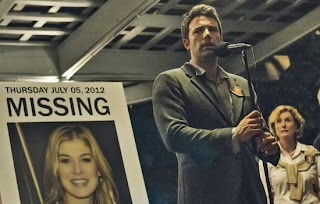 #9: Gone Girl
Misogynist? Feminist? Neither? Both? With Gone Girl David Fincher has created a film that is not only internally intricate but has inspired complex cultural reactions as well. Superficially a tidy little thriller that clicks along with the expected clockwork precision, scratch the surface just a little and you find a roiling mess of tensions and anxieties about the institution of marriage, the constructions of masculinity and femininity and the effect of the economy on both, the growing beast of the court of public opinion, and the media's enduring love affair with the narrative of the missing white woman. Whether all these ideas always come together in perfect harmony is open for debate, but one thing is for certain: Fincher has created a fascinating work that taps deeply into the cultural psyche. 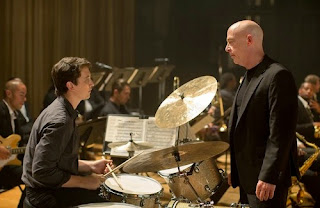 #8: Whiplash
Damien Chazelle's Whiplash is a film that can be described as being about how genius is made, the lengths that people will go to (and be pushed to) in the attempt to attain that level, and the culture of unearned praise which provides that even mediocrity will achieve some level of acclaim so long as the person achieving it tried their best. Whiplash is all these things, but more than that it is a story that explores the psychology of abuse, of how an abuser chooses and gets hooks into a victim, and how victims get and stay in the mindset that the person hurling abuse at them is someone whose approval they desperately need. Watching Miles Teller's lonely, isolated, and deeply vulnerable character open himself up in the belief that he's met someone who sees something special in him and wants to encourage it, only to have the intimate details of his life become part of the ongoing campaign of public humiliation is hreatbreaking. For all the film has to say about the pursuit of artistic achievement, it's this deeply keyed in look at the nuances of toxic relationships that sticks the most. 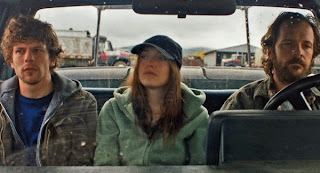 #7: Night Moves
I suspect that Kelly Reichardt's Night Moves is a film that one will either love or be utterly bored and frustrated with. Slow, quiet, and meditative in telling its story of a trio of eco-warriors who find themselves in over their heads, it's less about the act that they commit than it is about how that act tears apart their facade of togetherness. There remain things about the film that nag at me and keep me wondering - I'm still not sure what to make of that final scene, or whether I'm reading into it that the story is really about how Jesse Eisenberg's character has an unrequited attraction to Peter Sarsgaard's, comes up with the plot in the hope of impressing him and solidifying a relationship, and then is devastated to find that he loses him first during the planning stage to Dakota Fanning's character and then (and finally) in the aftermath of the narrative's two major events - but it seems to me that when a film that leaves you with lots to think about even months later, that can only be a good thing. Night Moves was one of the most intriguing films I saw in 2014 and has stayed firmly with me ever since. 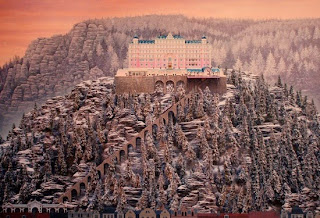 #6: The Grand Budapest Hotel
The Grand Budapest Hotel ends on a mournful note, as if all that transpired beforehand was a eulogy for the people the storyteller(s) have lost, for a way of life, for something vague - a spirit - that can't be recaptured or remade. Filmmaker Wes Anderson has long been known for the intricacy of the little cinematic worlds that he creates, worlds that are fully formed right down to the smallest and seemingly inconsequential details, and with The Grand Budapest Hotel he takes that craftsmanship to the next level. Structuring the narrative like a nesting doll with a story within a story within a story (each with its own aspect ratio) Anderson creates his most well-realized world yet, one with a sense of depth of history and generation spanning meaning. Peppering the film with many familiar faces and folding some new ones in as well, Anderson has created a film which alternates easily between tragedy and comedy and which grows richer with each viewing. 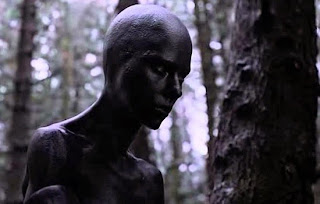 #5: Under the Skin
I wasn't sure how I felt about Under the Skin when I first saw it. I was unsettled, certainly, but whether it was in a good way or a bad way, I didn't know. Several months and a re-watch later I'm still not entirely sure, but the more I consider it, the more sure I become that this will prove to be one of the those enduring masterpieces that people still seek out, study, and debate decades after the fact. Starring Scarlett Johansson as a human harvesting alien, the film is part horror and part exploration of gender performance, both in terms of how the performer relates to the world and how the world relates to the performer. Under the Skin is not an easy film - it takes a deliberately alienating approach - but it unfolds with such skill that it has a deep and lasting impact. 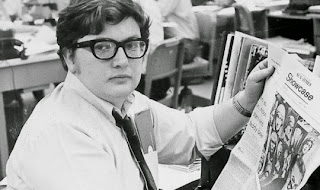 #4: Life Itself
If the world of cinema (at least the social aspect of discussing, dissecting, and debating cinema) is just a bit emptier in the absence of Roger Ebert, then Steve James' documentary Life Itself makes it seem full once again, if only momentarily. A celebration of the writer's life, work, and influence, in addition to a portrait of the two defining relationships in his life (the one with his wife, Chaz, and the one with fellow critic and former sparring partner Gene Siskel), Life Itself isn't the most hard hitting documentary of the year, but it's one of the most emotionally potent. In participating in the documentary, Ebert displays no vanity, allowing James to film him in moments of startling, painful intimacy as he undergoes medical treatments, and in private moments with his family. Though largely positive towards its subject, Life Itself doesn't lionize him, but presents him as a flawed but ultimately good man who found his passion early and was able to share it with the world. 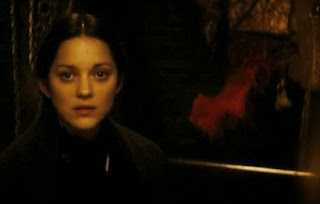 #3: The Immigrant
James Gray has developed a distinct style as a filmmaker, one built around an evocative use of shadow and light. Never has it been so effective as it is in The Immigrant, a beautiful looking film about the seedy underbelly of the American dream. Set in 1921, The Immigrant has the old fashioned feel of a classic movie melodrama (albeit one that is very direct about the unsavory paths that its heroine is forced to take by her situation) and has a first class performance from Marion Cotillard at its center, one which roots itself in raw, intense emotion without ever degenerating into scenery chewing. The Immigrant is an exquisitely put together and deeply felt film that deserved better than the almost non-existent release it received from its distributor, and which will hopefully lead to it finding its audience on video. 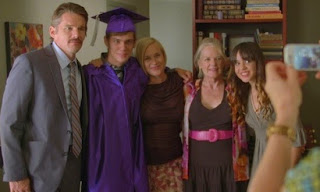 #2: Boyhood
Boyhood is a remarkable achievement, not just for the mere fact that Richard Linklater and his cast and crew were able to complete it by coming together for a few days every year over the course of twelve years, but for the fact that it ended up being more than just a curiosity, an experiment that exists for its own formalist purposes but doesn't really take off as a story. That Boyhood ended up being a masterpiece, a film which feels as though it captures the period over which it was made like a time capsule and tells an emotionally involving narrative which explores themes of near-universal appeal, is a testament to Linklater's quiet, unassuming genius and ability to reproduce on screen moments that feel natural and "real." The film isn't perfect - as it progresses it passes through various phases in Linklater's career, some of which are better and more assured than others - but it possesses the compelling immediacy of life. As Mason says in the film's final moments, "It's always right now." There's no better way to describe Boyhood. 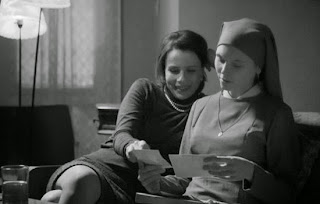 #1: Ida
Formally austere but emotionally rich, Pawel Pawlikowski's Ida was easily my favorite film of the year. A road trip film about a novitiate who is pressed by her convent's prioress to take a journey to meet the aunt she never knew she had, and then learns that she's Jewish and that her parents were victims of the Holocaust, the film is stark but intimate, tragic but funny, and deeply resonant. As the two women at the film's center, Agata Trzebuchowska and Agata Kulesza create a wonderful on screen relationship that evolves from active indifference to genuine affection with ease through the film's 80 minute running time, leaving no moments which feel forced or unearned. As a director, Pawlikowski crafts a film which is visually striking and which so perfectly roots itself in its period setting that it feels less like a period piece than a recently uncovered gem actually made in that period. Of all the films I saw in 2014, Ida is the one that struck the deepest chord and it is a wonderful, moving, and artful film.
Posted by Norma Desmond at 8:00 AM

Of these films I've only seen two, and they were both in my top ten as well! I put The Grand Budapest Hotel as my number one and Gone Girl was in at number 8.

Ida did play here, but the subtitles would be in Japanese, and I can't read enough Japanese to try to see it. I really want to now though!

Great list...I'll look out for more of these films!

I've only seen three of these, so yeah, lots of catching up to do.

@ Helen - yeah, Japanese subtitles wouldn't have been much help!

@Wendell Ottley - hope you enjoy them!