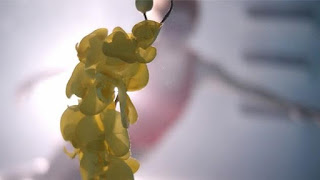 Shane Carruth’s Upstream Color is less the kind of movie that you watch and more the kind of movie that you experience. It’s a work that isn’t so much about the story – though the narrative itself is dense and rewards multiple viewings – but about the sensory reaction to it. It isn’t, by any means, an “easy” film but the skill behind it matches its ambitions, which helps keep it from drifting into the realm of pretention. Difficult as it may be, Upstream Color is an absolutely enthralling film that doesn’t demand multiple viewings so much as it seduces the viewer into returning time and again to try to unravel its mysteries.

As described by the film’ promotional materials, Upstream Color is about two people “entangled in the life cycle of an ageless organism.” Those two people are Kris (Amy Seimetz) and Jeff (Carruth), each of whom is separately infected by a parasite and then come together, drawn to each other by forces they don’t quite understand. The parasite (in the form of a worm), which passes from humans to pigs to orchids and back again perpetually, has been given to them by the Thief (Thiago Martins), who infects his victims so that he can hypnotise them and steal all their money. When the Thief’s work is done, the victim is then drawn towards the Sampler (Andrew Sensenig), who surgically removes the worms and inserts them into pigs, creating a connection between the human and their respective pig which allows the Sampler to “sample” the experiences of the human, which in turn inspires the music he creates and sells through his independent record company. When the Sampler disposes of pigs by tossing them into a river, the parasite filters out into the stream and into white orchids, turning them blue. The orchids are then picked by two farmers for sale through their company, one of their customers being the Thief, who uses the worms that come out of the orchids to commence the cycle again.

Though Jeff undergoes the process before she does, the film introduces Kris first, watching as she’s targeted by the Thief and enters the cycle. When she finally comes to, she finds her life completely in shambles, deeply in debt without knowing how and out of a job. As she’s getting her life back together, she meets Jeff, with whom she has an instant connection forged in the moment when the pigs with their respective parasites meet in the Sampler’s corral and touch snouts. From that point on, their lives become influenced by the experiences of the pigs. For example, when Kris’ pig becomes pregnant, she becomes convinced that she herself is pregnant. Later, when the piglets are born and taken away by the Sampler, Kris and Jeff react with the same fear and aggression as their pigs. They know that something is wrong with them, that something has happened to them, and discovering what exactly it was becomes their primary objective.

Carruth doesn’t spend a lot of time unpacking the narrative, leaving that instead to the viewer while focusing on creating a visual experience that washes over you, carrying you along the film’s hypnotic currents. While a strategy like this one doesn’t work for every film, in this particular case it does and for two primary reasons. First, while reading the various analyses of the film is certainly helpful and even enriching to the product, it isn’t actually necessary to do so; everything you need to know is right there in the movie, the information just isn’t elucidated in the way it would be in a more conventional film. Secondly, while Carruth is indisputably an intellectual filmmaker who is playing with big ideas and complicated concepts, he isn’t a filmmaker without artistic flair. Carruth has a strong visual style, making effective use of color and creating scenes full of clean, stark lines that help underscore the clinical nature of the narrative.

As an actor, Carruth does a serviceable job as Jeff and leaves most of the heavy lifting to Seimetz, who is more than up to the task. Though Jeff and Kris have nearly identical experiences, they seem more intense in Kris, who ultimately takes on the role of avenger in the film’s climax. The two performances play off of each other nicely, creating the balance that the film needs in order to properly focus on its more metaphysical elements. While Upstream Color certainly can't be accused of being one of the most accessible films of the year, it is definitely one of the year's most fascinating.
Posted by Norma Desmond at 8:00 AM