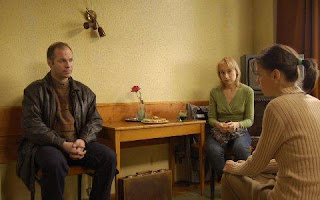 Of all the things that make Cristian Mungiu’s masterpiece 4 months, 3 weeks and 2 days such an extraordinary piece of work, perhaps the most remarkable is that it manages to be an “issue movie” free of the shrill proselytizing that typically accompanies such works. It can be described as a film about abortion, yes, but it isn’t concerned with the supposed moral rightness or wrongness of the issue; rather, its concern is with how anti-abortion laws disenfranchise women, particularly those of lesser means. By focusing so precisely on that aspect of the issue – and unfolding the story with a stark, often cold simplicity – Mungiu keeps the film from becoming bogged down in sentimentality or righteousness. Instead he creates a brutal, razor sharp picture of life under oppression.

The story centers on Otilia (Anamaria Marinca) and her friend, Gabita (Laura Vasiliu), two university students in 1987 Romania. Gabita is pregnant and has been put into contact with Mr. Bebe (Vlad Ivanov), a man who secretly performs the abortions which are illegal under Ceausescu’s regime, but her inherent passivity leaves Otilia picking up the slack to ensure that things get underway. First Otilia runs around making the clandestine arrangements which Gabita was supposed to, but neglected, to make; then, in one of the film’s darkest scenes, it becomes clear that by procuring Bebe, Gabita has negotiated herself and Otilia into an impossible position. During their initial contact, Gabita and Bebe didn’t determine a price – rather, he informed her that they would “work something out.” Something turns out to be a demand of sex from both women, to which they feel they must acquiesce because Gabita is so far along that she can’t afford to delay.

The procedure – which involves Bebe inserting a probe and some fluid and then leaving, giving the women instructions on how to dispose of the fetus and what to do in case of emergency (which is basically nothing, because calling an ambulance would ensure their arrest) – is performed and, despite Gabita’s delicate position (she’s told she has to lie perfectly still for the next several hours while the probe does its work), Otilia is required to leave her alone so that she can meet her boyfriend and attend his mother’s birthday party, an engagement she couldn’t get out of. The way that Mungiu films the party, with Otilia and her boyfriend’s family crowded around a table, emphasizes how trapped the characters are. Mungiu plays a lot with the confinement of space; even when the space on screen is ostensibly open, he finds a way to make it feel confined, creating an atmosphere of oppression and suffocation that speaks directly to the film’s primary theme.

The success of the film rests in no small part on Marinca, whose performance is absolutely mesmerizing. Although Gabita is the catalyst of the narrative, the film is constantly turning away from her to focus on the more self-possessed Otilia. While it might seem, on paper, like the film is burying the lede by adopting this strategy, there is a vital point to be made: Otilia might not be the one who’s pregnant, but Gabita’s lack of agency over her own body has consequences on, and ultimately does harm to, Otilia (and, by extension, all other women) as well. That final shot, in which Otilia turns to the camera with a very direct and challenging look, drives it home. 4 months, 3 weeks and 2 days may be a film about a very specific place and time, but what it has to say remains relevant and compelling.
Posted by Norma Desmond at 8:00 AM