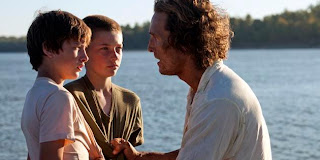 Two southern boys, navigating the rough terrain between childhood and adulthood, trying to break away, even if only temporarily, from home lives that leave something to be desired, and setting off on adventures that expose them to danger. You might call them Tom and Huck, but in Mud writer/director Jeff Nichols calls them Ellis and Neckbone. As an adventure yarn slash romantic vision of the unique freedoms of adolescence, it’s fairly good. As an entry in Matthew McConaughey’s recent career renaissance, it’s the best yet – at least until Dallas Buyers Club and The Wolf of Wall Street hit screens.

Set in the Arkansas delta, Mud is a film about manhood and escape. It’s protagonist is Ellis (Tye Sheridan), who lives on the water with his parents, Senior (Ray McKinnon) and Mary Lee (Sarah Paulson), whose marital discord prompts Ellis to retreat up the Mississippi River with his best friend, Neckbone (Jacob Lofland), an orphan who lives with his uncle (Michael Shannon). The two head for an island where Neckbone knows of a small boat that’s been stranded in a tree following a flood, and the two plan to somehow get it back into the water and keep it for their own. Climbing the tree in order to explore the boat further, they discover that someone has been living in it and when they get back to the beach they meet Mud (McConaughey), a mysterious drifter who informs the boys that he’s waiting for someone and asks them if they can get him some food. Neckbone wants to leave well enough alone, but Ellis feels compelled to help Mud, especially after he discovers that everything Mud is doing is for love of his on-again, off-again girlfriend Juniper (Reese Witherspoon), with whom he plans to run away.

Of course, there’s a reason why Mud can’t just stroll into town and pick Juniper up, which is that he killed her abusive boyfriend and is now on the run from both the authorities and the boyfriend’s vengeful family. Identifying deeply with the romantic element of Mud’s story, Ellis not only helps Mud by bringing him food, he also helps him by delivering messages between Mud and Juniper, something which brings him directly onto the radar of the men determined to kill Mud. He helps Mud come up with a plan to get away with Juniper, but instead of getting to see them ride off into the sunset, Ellis instead finds himself disillusioned by a series of romantic disappointments. Mud and Juniper are not star-crossed lovers, but two broken people who have spent decades drifting in and out of each other’s lives and making a mess of things; the girl Ellis likes rejects him; Senior and Mary Lee are at a crossroads where it seems likely that they will split up, and Ellis will be removed from the way of life that he holds so dear.

Mud is a film very much concerned with what it means to be a man, and what it means to be a man trying to connect with a woman. I’ve read criticism of the film which describes it as “anti-woman,” but I don’t think that’s quite what’s going on here. The film’s depiction of its female characters isn’t positive (it should be noted that its depiction of adult male characters isn’t exactly “positive” either), but keep in mind that the story is being told from the perspective of a 14-year-old boy who knows nothing about women and is surrounded by men who seem to know nothing about them either. The men in this movie seem largely baffled by women. Senior doesn’t understand Mary Lee’s desire to move into the city because being on the water is a key part of his identity as the family’s provider, whereas for her being on the water is something which keeps her isolated and limits her potential to have an identity beyond that of wife and mother. Neckbone’s uncle is reputed to be a ladies’ man, but the only time we actually ever see him with a woman, she’s screaming at him about how he ought to treat members of the opposite sex. Mud holds on to the idea of what he wants his relationship with Juniper to be, but to do that he needs to ignore the reality of what their relationship has been. These are men lost at sea when it comes to relating to women, and that anxiety manifests itself in different ways as they try to define themselves as men in the absence of female affirmation. Senior clings to life on the river, where his role as “provider” is cleanly defined; Mud resorts to violence against other men in Juniper’s life in order to assert his place therein.

Although Mud never quite builds to the intensity of Nichols’ previous film, the apocalypse drama Take Shelter, it’s a solid coming-of-age drama. McConaughey’s performance as the grimy, hopelessly romantic and somewhat naive Mud is excellent, displaying depths never previously brought to light by his previous performances. That being said, despite what the film’s promotional materials might lead you to believe, McConaughey really isn’t the film’s star. That distinction belongs to Sheridan, who anchors the film with the kind of strong, assured performance that few young actors can muster. He’s terrific and the film around him is the kind of solid, small-scale picture that we could use more of.
Posted by Norma Desmond at 8:00 AM