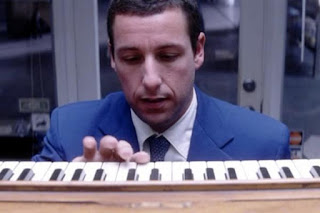 Punch Drunk Love is an anomaly in writer/director Paul Thomas Anderson's career. For one thing, it's about half the length of his other films (with the exception of Hard Eight). For another, it's imbued with the kind of quirky sensibility that feels more at home in the work of an Anderson contemporary like Spike Jonze. It's a fascinating little palate cleanser coming between the flashy, sprawling cast productions of Boogie Nights and Magnolia, and the more reserved and singularly focused There Will Be Blood and The Master. It's also an interesting take on star Adam Sandler's "angry man" persona.

Sandler stars as Barry Egan, a novelty plunger salesman whose life is thrown into turmoil by three events: the mysterious abandonment of a harmonium in the street following a car accident; the arrival of Lena (Emily Waton) into his life; and an extortion attempt by a phone sex operator. The circumstances surrounding the harmonium are never really explained. Lena's arrival turns out to be more than just chance - she's heard about Barry through Elizabeth (Mary Lynn Rajskub), one of his seven sisters, and gone to seek him out. Later, Elizabeth actively tries to bring them together, which puts Barry on edge. Just about everything connected to his sisters puts Barry on edge, though, and his quiet, awkward demeanor masks wellsprings of rage that tend to explode in fits of violence that seem to bewilder even himself. While attending a family function, for example, we watch him become more and more tense as his sisters pick on him and make him feel self-conscious, until finally he just starts smashing windows. He doesn't know why he does it; he just does.

His odd behavior has left him largely isolated and he doesn't really know how to relate to people. One night he calls a phone sex line, but doesn't really seem to know what the operator is expecting from him and gets dragged along through the conversation. In the morning, the operator calls him back to extort money from him and, after he refuses to send her money, four goons are sent to rough him up and take $500 from him. Most people, at this point, would leave well enough alone, but Barry kicks the hornet's nest instead by calling the phone sex line again and threatening to go to the police. His inability to leave well enough alone puts both himself and Lena in danger but, as he explains to the man behind the phone sex scam (Philip Seymour Hoffman in a delightfully over-the-top villain role), "I have so much strength in me; you have no idea. I have a love in my life. It makes me stronger than anything you can imagine."

Punch Drunk Love is a portrait of pain and alienation alleviated by love. Barry is a misfit who doesn't quite fit in with anyone around him, who is intensely socially awkward, and obsesses over things like the harmonium and a loophole he's discovered in a grocery store promotion which he intends to exploit by buying enough pudding to amass a million frequent flyer points - not because he intends to go anywhere, but just because the opportunity has presented itself (this part of the narrative, incidentally, is based on a true story). Lena's arrival in his life is a turning point because, for whatever reason, she's able to take in all his quirks and accept them, and him. There aren't many films that could pull off "love conquers all" as a solution, but Anderson makes it work and he guides the film to that point without ever diminishing or compromising the characters.

For Watson, this is another in a career full of great performances. It's a quiet, subtly keyed performance that fits nicely with that of Sandler, helping to bring out softer shades in his character. For Sandler, the performance is nothing short of a revelation. He's played explosively angry characters in other films, but none with such psychological depth and none which were played quite so straight while still being funny. Although since 2002 Sandler has played more serious roles, none have really come together in quite the same way as his performance in Punch Drunk Love. It's a one of a kind picture in the filmographies of both its star and its director, an oddity that is only more beautiful for its strangeness.
Posted by Norma Desmond at 8:00 AM