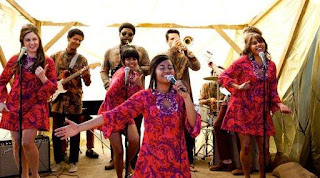 There are a number of ways with which to judge the success of a film, the most common being according to the skill the film displays, and the feelings a film inspires. In great films, those two threads often dovetail; in good films you sometimes end up with one or the other, either a film that is technically proficient but leaves you cold, or a film that leaves you feeling good despite its technical shortcomings. Wayne Blair’s The Sapphires is the latter, a somewhat messy piece of work that ultimately succeeds on its finely tuned crowd pleasing instincts, and an abundance of charm.

Set in Australia in 1968, and very loosely inspired by real events, The Sapphires centres on three sisters, Gail (Deborah Mailman), Julie (Jessica Mauboy), and Cynthia (Miranda Tapsell), and their cousin, Kay (Shari Sebbens). As the film opens the sisters have been long separated from their cousin who, as a light-skinned Aborigine, was claimed as a child by the government to be raised apart from Aboriginal culture. The four women are brought back together by Dave Lovelace (Chris O’Dowd), an Irish piano player and talent scout, who sees something in the sisters after they make an unsuccessful bid at a local talent competition and decides to help them secure a job entertaining the troops in Vietnam.

Getting to Vietnam proves (relatively) easy. Navigating the often chaotic terrain proves much harder. Though things go smoothly at first, thanks in large part to the military escort that helps shuttle the group from one gig to the other and brings them closer and closer to the front, disaster eventually strikes in the form of enemy fire at one of their shows, which leaves the women separated from Dave and uncertain about whether or not he’s survived. Add in to this the various kinds of personal turmoil being experienced by members of the group – Julie feels guilty about being separated from her young son, Julie and Gail are at odds over their positions in the group (as the eldest, Gail has always been accustomed to being the leader, even in the group, but Julie is the more talented and charismatic singer), and Kay is struggling over her racial identity – and the situation is a veritable powder keg.

Based on the play of the same name by Tony Briggs (inspired by the experiences of his own mother), The Sapphires doesn’t exactly set out to reinvent the wheel. It follows predictable plot movements, from the interpersonal conflicts between the members of the group, to the relationship that develops between Gail and Dave, to the moment of crisis when it appears that Dave might be dead. What elevates the film above these rote elements are the performances, both musical and acting. The actors (O’Dowd and Mailman, in particular) bring enough life to their characters to keep them from being mere archetypes, and the musical performances (which include such classics as “I Can’t Help Myself” and “I Heard it Through the Grapevine”) are fantastic, making for the kind of lively film that leaves you walking out of the theater in a good mood.

While the film is mostly light-hearted and favours a familiar plot structure, it does make an effort to dig a bit deeper. The issue of racial identity if dealt with in a complex way, using the deep running scars of the governmental policies that led to the Stolen Generations to flesh out the characters and their relationships. The Sapphires doesn’t focus enough on the subject to be properly considered an “issue movie” but it does develop the theme enough to make it a viable thread that runs throughout the story, rather than just a plot point and contrivance. The Sapphires may be a flawed film, but it has heart, which helps make it the highly entertaining piece of work that it is.
Posted by Norma Desmond at 8:00 AM