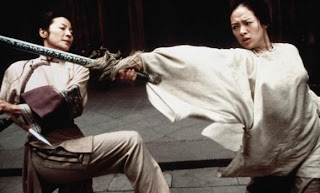 To watch Ang Lee’s Crouching Tiger, Hidden Dragon is to see a masterclass in film craftsmanship. Everything comes together beautifully in this film – the photography is gorgeous, making use of a beautiful color pallet, the score perfectly complements the action, the fight choreography is amazing, and the acting (anchored by Chow Yun Fat and Michelle Yeoh) is excellent. The film looks like a work of art but, more importantly, the strength of its storytelling gives it a timelessness that few films can claim.

In brief, Crouching Tiger is about the Green Sword of Destiny, gifted by the legendary Li Mu Bai, and stolen by Jen Yu (Zhang Ziyi), who is meant to marry one man though she’s in love with another. A pursuit occurs (involving many extraordinary fights) but, while the sword is eventually recovered and Li finally confesses his love to fellow warrior Shu Lien (Yeoh), he also loses his life to Jade Fox (Cheng Pei-pei). Meanwhile, in addition to being involved in the theft plot, Jen also finds herself caught between the life (and marriage) her family desires her to have, and the life she truly yearns to have.

One of the striking things about Crouching Tiger is how it focuses on the issues confronting its female characters, giving them a prominent place in the story and exploring the effects of gender and class norms. The two main female characters, Shu Lien and Jen both have romantic interests, but they aren’t defined solely by their relationships with men; the film uses those relationships to contextualize these women’s lives, exploring the limits of the choices available to women, as well as the long-term effects of those choices. Shu Lien seemingly has the benefit of freedom, but she adheres strictly to the moral (and very patriarchal) code of her society. Jen feels she must marry in accordance with her family’s wishes, but can’t suppress her need to be free, to make her own choice and find her own way. Meanwhile, the events of the film are set in motion after Jade Fox is denied the secrets of the Wudang because she’s a woman and the knowledge is meant to be limited solely to men. Although on the surface the film might look like a particularly artful martial arts picture, even a moderately close look at what's going on thematically reveals it to be a deeply socially conscious film.

There are a lot of films which play incredibly well when they're first released, fitting perfectly within the context of that specific era, which in turn become dated, either because of their message or their style or both. Crouching Tiger is not one of those films. It plays as magnificently now as it did in 2000, proving to be just as breathtaking and engrossing as it was 13 years ago. It's that rare film that will be discovered and rediscovered by generations of film fans to come, gaining new admirers and standing the test of time. It's a film entirely in a class of its own.
Posted by Norma Desmond at 5:00 PM