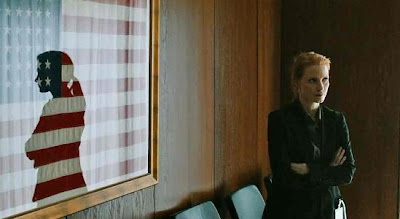 In a year seemingly filled with controversial films, Zero Dark Thirty may very well go down as the most controversial (although the Django Unchained action figures may have secured the distinction for that film). The story of the CIA hunt for Osama bin Laden, as experienced through the eyes of one woman, Kathryn Bigelow’s film is brutal, fascinating, and absolutely gripping from beginning to end. Don’t let the debate scare you away: this is a film that ought to be seen, if only for the craft of its telling.

Zero Dark Thirty centres on Maya (Jessica Chastain), a novice CIA agent who, in her first scene is witness to a vicious interrogation of a detainee at a black site in Pakistan. The leader of the interrogation is Dan (Jason Clarke), who gives Maya a crash course in “enhanced interrogation” as he humiliates and tortures the detainee, who has links to terrorists in Saudi Arabia. Though the torture of the detainee fails to make him give up information that could have stopped a terrorist attack in Saudi Arabia, the detainee’s mental disarray in the wake of what he’s endured allows Maya and Dan to trick him into giving up the name of a courier for bin Laden. The search for the courier – known as Abu Ahmed – becomes an obsession for Maya, who will spend the next eight years following leads.

While Dan eventually burns out and returns to the US to take a less intense position at the CIA, Maya stays on in Pakistan, zealously continuing her search while also navigating the sea change in the US stance on how detainees are to be treated and interrogated, and surviving several close calls. She and her colleague and friend, Jessica (Jennifer Ehle) survive the 2008 Islamabad Marriott Hotel bombing, she declines to attend a meeting at Camp Chapman which ends with Jessica and several others being killed in a suicide attack, and she survives an attempt on her life as she’s leaving her residence in Pakistan. She also suffers a blow to her morale when word comes that Abu Ahmed has been dead since 2001, until she realizes that they man they thought was Abu Ahmed was actually one of his brothers. Eventually locating Abu Ahmed, they also find a compound in Abbottabad, where Maya comes to believe bin Laden is hiding out. However, although she’s certain that he’ll be found there, not everyone is willing to take the risk of going after him on so little evidence. It isn’t until over 100 days after finding the compound that a raid is finally approved, bringing to a close Maya’s long and difficult journey.

As it has become impossible to discuss Zero Dark Thirty without addressing the subject of torture, my two cents: Bigelow was damned if she didn’t, and damned if she did. By showing scenes of torture in a film that ends with the killing of Osama bin Laden, the film opens itself up to criticism that it condones torture. If the film hadn’t featured some acknowledgement of torture, it would have been accused of whitewashing history. But acknowledging torture is not the same thing as advocating it and I don’t think that torture, as depicted here, is shown to be so effective that the film’s stance on it can be qualified as “pro.” For one thing, the evidence the CIA obtains as to bin Laden’s whereabouts comes not from torture, but from methodical, painstaking detective work. For another, the torture inflicted in the film fails to yield the desirable results. The prisoner tortured in the film’s first scene does not give up information that could prevent the success of a terrorist attack and, later, torture of another prisoner fails to make him give up information about Abu Ahmed and his whereabouts. Torture is not depicted as the way that the US found bin Laden, but as one method employed by the CIA to find him – a method which isn’t especially effective, and which takes an enormous toll both on those being tortured, and those inflicting the torture.

Zero Dark Thirty does not portray torture in a glamorized way – the average horror movie fetishizes violence more – and, moreover, I think the film is actually critical of the US government’s approach to the War of Terror, framing the pursuit of bin Laden as one inspired less by a need for “justice” than for “revenge.” The story has the framework of a revenge narrative, starting with the prologue which features audio of 9-1-1 calls from people trapped in the Twin Towers over a black screen. Later the film more firmly establishes that motivation by having Maya, the character through whom the American perspective is filtered, lose someone she cares about in a terrorist attack. Although she was always invested in the hunt for bin Laden, it becomes undeniably personal for Maya following Jessica’s death and she openly declares her intention to kill everyone responsible for it. When the raid is being planned, she specifically tells the Navy Seal team that they’re going to find bin Laden and kill him for her, which means that killing bin Laden isn’t depicted as a last resort in the event that he couldn’t be taken alive, but as the mandate all along. That in turn gives the endeavor the unnerving air of having been a government condoned assassination.

Written by Mark Boal, a former journalist who also collaborated with Bigelow on The Hurt Locker, the film takes a stark, matter of fact approach to its subject matter. It covers a lot of ground, doing so in an efficient way that doesn’t just maintain, but actively continues to build, the tension and pressure leading up to the film’s major set piece, the raid on bin Laden’s compound. That sequence, vigorously directed by Bigelow, is one of the tightest and most memorable action sequences of the year, an exhilarating ride even though you know how it’s going to end. While I think the film is ultimately critical, even if only mildly, of how and why the bin Laden story ended as it did, it also imbues each scene with an internal sense that there’s no time to lose in stopping to consider how things are playing out. Things are happening too fast and the characters have to keep moving on to the next thing in order to keep the pace. Maya, for example, is shown as being shaken and disgusted by the torture of detainees but, at the same time, feels such a sense of urgency to the matter that not only does she fail to voice any objection to it as a strategy, she doesn’t hesitate to employ it herself either.

Although there’s arguably not a lot to Maya as a character – the film does not show any of her life outside the hunt for bin Laden, and the only relationship of any real substance that she has is her friendship with Jessica – the way that the film uses her is intriguing. She’s everything that female characters in fiction aren’t supposed to be, and instead of having her be put in “her place,” as most “difficult” women in fiction are, she instead gets to triumph. While that in and of itself doesn’t make the film feminist, there is a feminist undercurrent to it which first pronounces itself at the beginning of the film, when Dan is about to introduce the Islamabad Chief Joseph Bradley (Kyle Chandler) to Maya and bro-ishly remarks to him, “What’d I tell you?” in reference to how Maya looks, highlighting the kind of institutionalized sexism so often found in male dominated fields. This thread is further nourished by the film’s refusal to force any kind of romantic subplot into the proceedings, which totally subverts typical viewer expectations about stories that centre on women. Maya is, quite simply, a woman who does her job. That’s all the film needs her to be and it’s incredibly refreshing.

Zero Dark Thirty is a film that is sometimes difficult to watch – its first scenes, in particular – but it is an important and vital film nevertheless. Laying aside the issue of politics, the film is an expertly constructed piece of work, near perfectly executed. It will long outlast the controversy attached to it.
Posted by Norma Desmond at 8:00 AM