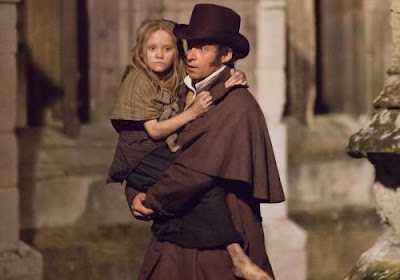 Les Miserables is going to make a lot of money. It's going to get nominated for a bunch of Oscars including, I'm certain, Best Picture. It's going to be loved by a lot of people. There's a lot of good news for Les Miserables. The bad news is that it's actually not a very good film. It has its moments, it is sometimes entertaining, sometimes even moving, but its flaws are so prominent and so distracting that the elements of value are almost buried beneath them.

Les Miserables is the story of Jean Valjean (Hugh Jackman), an ex-convict haunted by his past - and pursued for decades by the relentless Inspector Javert (Russell Crowe) - as he struggles to do right and lead a good life. Having had a religious epiphany courtesy of the generous Bishop of Digne (Colm Wilkinson, who originated the role of Valjean in the stage production), Valjean breaks parole and reinvents himself, reappearing eight years later as Monsieur Madeleine, a factory owner and the mayor of Montreuil-sur-Mer. There he comes face to face once again with Javert, who doesn't immediately recognize him, though soon becomes suspicious, and comes into contact with Fantine (Anne Hathaway), who is expelled from his factory after it is revealed that she has an illegitimate child and is forced to turn to a life of prostitution. When Valjean discovers what has become of her, he promises Fantine, who is now dying, that he will retrieve her daughter, Cosette. Before he can do so, however, he's forced by his conscience to confess his true identity in order to prevent another man from being convicted in his place for breaking parole, and Javert is determined to bring him to justice himself.

Valjean escapes from Javert in Montreuil-sur-Mer and locates young Cosette, who has been left in the care of the Thenardiers (Sacha Baron Cohen and Helena Bonham Carter), a pair of thieving innkeepers who use Cosette as an indentured servant. With Javert close at his heels, Valjean spirits Cosette away, eventually finding refuge within the walls of a convent in Paris. Nine years after that, Valjean finds that Javert is once against close at hand. Meanwhile, a now grown Cosette (Amanda Seyfried) has fallen in love with Marius (Eddie Redmayne), a member of a student group led by Enjolras (Aaron Tveit) that aims to spark a revolution against the oppressive forces of the restored monarchy. As the students take to the streets, Valjean suspends his flight from Paris in order to make sure that Marius survives the battle and, in addition to several life and death situations he encounters, he also finds himself in a moral quandary when he finds himself with the power of life or death over Javert.

At its core, Les Miserables is a story about morality and about the ways that what is morally "right" is sometimes in conflict with what is right according to the law. Valjean commits a wrong, for which he is punished by the law, but the crime that he committed is rooted in a moral right: he stole bread to feed the starving children of his sister. In the eyes of the government and law, he will forever be a criminal, forced to carry with him a sheet of paper that announces his status as such and which in turn prevents him from finding honest work. His options, then, are to resort to criminality and go back to prison, or to abandon his life as Jean Valjean and become someone new, someone with a clean slate who can be allowed to live a good and honest life. As Monsieur Madeleine he does a lot of good, but in the eyes of the law none of that matters: he will always be Jean Valjean, a criminal. That's why he is hunted for decades by Javert, whose rigid code of ethics does not allow him to see any complexity to Valjean's character. That is why, when Valjean's true nature can no longer be denied, it destroys Javert. The knowledge that the rule of law, to which he has given over his entire life and his entire sense of self, is sometimes in conflict with what is morally right is too great for him to bear. He can't live in a world like that, one which is corrupted at an institutional level and where justice is calibrated to maintain the stauts quo of the classes.

When the film engages with these themes, it is at its best. It captures the griminess and despair of its characters, most of whom exist at the very limits of poverty, clinging to life by their fingernails; and it effectively establishes Valjean and Javert as opposite ends of a moral spectrum. Valjean is the man who committed a legal wrong which inspired him to go on to commit many moral rights. Javert is the man who increasingly does wrong in the belief that what is legally right is equal to what is morally so. Crowe is a weak link in the cast when it comes to the singing, but when it comes to Javert's crucial scene, when he realizes that he's ordered his life according to a false premise, it becomes clear why he's the right actor for the role. He brings the right amount of gravitas to that moment, and makes palpable Javert's regret and devastation.

On the whole, the film is well-cast. Playing the two emotional anchors of the story, Jackman delivers his best performance to date as the haunted and hunted Valjean and Hathaway is a standout as the tragic Fantine. In the slightly more thankless roles of the members of the young love triangle, newcomer Samantha Barks is solid as Eponine, the daughter of the Thenardiers and Cosette's rival for Marius' affections, while Seyfried brings a bit of life to Cosette, a character whose utter passivity makes her a little difficult to actually root for, and Redmayne, to his absolute credit, manages to make Marius (who as a character is a bit of an empty symbol) compelling. I would actually rank his performance right behind that of Hathaway as one of the film's greatest strengths.

On the other side of the coin, there are a couple of pretty big weaknesses. The first - and I should probably preface this by stating that I've read the novel, but I've never seen the stage production - is that everything feels a bit rushed. Now, granted, it would be impossible for any one film to achieve the breadth and depth of Victor Hugo's novel but the film jumps so quickly from one set-piece to the next that it can be difficult to actually get a feel for the characters, let alone care about them or invest in their plight. The other problem is Tom Hooper's bizarre directing strategy, which reduces the film down to a series of close ups and oddly angled shots. For numbers like "I Dreamed a Dream" or "Empty Chairs at Empty Tables" this strategy actually works, as the close ups lend a sense of intimacy and immediacy to the grief of Fantine and Marius, respectively. But for the scenes which take place at the barricade, for example, the strategy is disastrous because it mutes scenes which would play best on a grand scale. If ever there was a time to go big, it's with a story like this, but Hooper makes it too small and fails to see the forest for the trees. Fortunately the film has its music to fall back on, which can move you even as everything on screen seems wrong - but you are still aware that it just looks wrong.
Posted by Norma Desmond at 8:00 AM

This move looks fantastic. I have read so many positive movie reviews and I cannot wait to get out to see it.