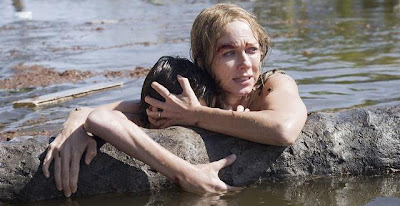 It’s the great equalizer: a wall of water ruthlessly rushing forward, knocking out everything in its path and rendering all the eye can see to ruins. The only thing that can help you in a situation like that is luck, and even then it might only help you get your head above water and no further. The aptly named The Impossible is the true (as far as that goes, in a fiction narrative) story of a family of five (Spanish in real life, British here) that somehow manages to survive the 2004 Indian Ocean tsunami intact. Directed by J.A. Bayona, this is an intense experience that leaves one shaken at the sheer power of nature and the human spirit.

The Impossible centers on the Bennett family – Maria (Naomi Watts) and Henry (Ewan McGregor), and their sons Lucas (Tom Holland), Thomas (Samuel Joslin) and Simon (Oaklee Pendergast) – as they spend Christmas 2004 at a resort in Thailand. Their happy holiday is cut short on Boxing Day, when the family is spending time at the resort’s pool and a sudden change is felt in the atmosphere. In an eerie scene, the birds above are seen beating a hasty retreat, and all the humans become vaguely aware that something is very wrong in the seconds before the water is seen rushing towards them. The family is separated and Maria comes up through the water, injured having gone through a glass wall, and sees Lucas struggling nearby. Swimming towards him, she’s injured further, and then a second wave comes bearing down on them. They survive this, too, and are able to make it to a fallen tree, where they catch their breath and try to figure out their next move.

Maria and Lucas begin making their way through the desolate landscape, Maria badly injured and struggling to keep it together for the sake of her son. They pick up another survivor, a young boy named Daniel, and make it to higher ground until help arrives to get them to a hospital. There Maria’s condition worsens and she and Lucas are separated in the confusion at the hospital. Meanwhile, Henry, Thomas and Simon have also survived and managed to stay together. Desperate to find Maria and Lucas, Henry decides to send Thomas and Simon to higher ground with other survivors while he stays behind to continue his search. He’s joined by another man, whose wife and baby were at the beach when the tsunami hit, and they set off to search the hospitals, both official and makeshift, trying to find their loved ones.

The tension over whether or not the family will be reunited is basically non-existent, thanks to the film’s trailers, but the film gets a lot of dramatic mileage out of Maria’s increasingly dire situation. Watts, a consistently great actress since her star making turn in Mulholland Drive, carries a considerable amount of the film’s weight, even when her character is confined to a hospital bed and barely conscious. The rest of the heavy lifting is ably performed by McGregor and Holland who, at just fourteen at the time of filming and in his film debut, proves to be a formidable talent. For the entirety of the second, and much of the third, acts Maria and Lucas believe that they’re the only members of the family to have survived and as Maria’s condition deteriorates, Lucas becomes her champion, fiercely protecting her even as the situation calls upon him to demonstrate a strength far beyond his years. The relationship between Maria and Lucas, even before the disaster hits, is the driving force of the story and Watts and Holland play out that dynamic with a great deal of nuance and complexity.

The Impossible has come under fire in some corners for the perceived racism of choosing to focus on five white people who survived rather than the hundreds of thousands of Thai people who died. While I think it’s a valid point that the perspective of the people who suffered the most from the tsunami – people who lost not just their lives or the lives of loved ones, but everything else as well – is lacking, and that Western filmmakers have historically shown a shameful unwillingness to tell stories from the point of view of people of color, I think that this is the wrong movie to use to make that point. Yes, the family depicted here is Western and privileged, but the fact that they aren’t Thai doesn’t negate their story or their experiences. To politicize this film misses the entire point of the story: it’s about how people come together and become their best selves (with a few exceptions – and in this film those exceptions are solely white Westerners) in times of disaster. Moreover, while The Impossible focuses on the perspective of privileged white people, it does acknowledge the kindness and generosity of Thai people, who are the ones who come to Maria and Lucas’ rescue, and it makes it clear that the Bennett knows how lucky they are. The final moments of the film, which focuses on the incredible devastation the Bennetts are leaving behind as each of Maria, Henry and Lucas find something to remind them of just how close they came to losing each other, emphasise that no matter how harrowing this family’s experience was, there is still greater tragedy beyond them.

While not without a few weaknesses (the “will they or won’t they” in the film’s final act, as family members just miss finding each other, is frustratingly overplayed), The Impossible is a powerful film and a technical marvel. I am amazed that the only Oscar nomination scored by the film is for Watts, while the visual effects and makeup effects teams were overlooked. There is a lot of amazing work in this film and I highly recommend seeing it on the big screen, if at all possible.
Posted by Norma Desmond at 8:00 AM