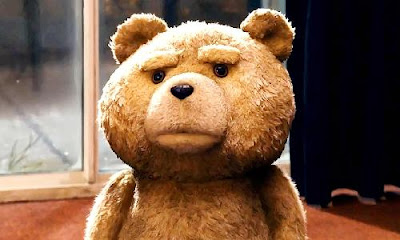 If you're wondering what happened to all the low hanging fruit, look no further than Ted. If there's a lazy, obvious joke to make about something, this film will make it, hoping that by having it voiced by a foul mouthed teddy bear it will seem fresh. Is Ted funny? Sometimes. But the sheer number of jokes and gags ensures that at least some of them will land and some of them are, in fact, very funny. The more important question is: is Ted a movie? To which I say... it's kind of not.

Ted begins with the wish of a lonely young boy who longs for a friend. That wish is granted in the form of Ted (voice by Seth MacFarlane), a teddy bear come to life who grows up alongside John (played as an adult by Mark Wahlberg) and then proceeds to arrest his development as an adult. The two share an apartment with John's girlfriend, Lori (Mila Kunis), until an incident involving Ted, some prostitutes, and an intense game of truth or dare results in Lori giving John an ultimatum: either Ted moves out or she does. John reluctantly tells Ted that he has to pack up and Ted moves into his own apartment, but distance does little to alleviate what Lori sees as Ted's bad influence on John. After John ditches her at a party so that he can hang out with Ted and Flash Gordon, Lori dumps him and John, in turn, dumps Ted, determined to finally grow up and become an adult.

While John tries to figure out how to get Lori back, Lori is talked into going on a date with her boss (Joel McHale), who has been aggressively pursuing her since before she and John broke up. Meanwhile, Ted is being stalked by Donny (Giovanni Ribisi), who as a child became entranced by the story of the teddy bear that magically came to life and has remained fixated on Ted ever since. He and his son are determined to get Ted for themselves, first by trying to buy him from John and then by kidnapping him. John is left not only trying to work things out with Lori, but also trying to save Ted and, perhaps most importantly, finding a way to reconcile the two sides of his life.

The humor in Ted tends towards the sophomoric, which isn't a problem in and of itself when the jokes are funny, which is genuinely the case many times in this film. The problem with Ted is that while it has the rhythms of a story, it never truly tells one. If the film had just been a series of sketches about a cursing, pot smoking teddy bear brought to life by the magic of a child's wish, I might have enjoyed it more. As it is, it's a film which sometimes rouses itself to present things vaguely resembling character and plot development and obstacles for its heroes to overcome, and then never follows through on anything. Lori's boss is set-up as a romantic spoiler while never seeming like a real threat (even while on a date with Lori), the Donny plot is ill-constructed, showing up sporadically until the third act when it takes over and leads to an ending of unearned sentimentality, and in a general way the story is just too shapeless for there to be any kind of tension, dramatic or otherwise, in any of the film's threads.

All that being said, even though I don't think that Ted is an objectively good film, it is enjoyable while you watch it. Wahlberg delivers a relaxed and often charming performance that's all the more impressive when you consider that he spends most of the film playing off a character who was never physically there with him on set. Meanwhile Kunis softens the edges of a character who might otherwise have been little more than the designated shrew breaking up some good bro time. I think that's what's actually so frustrating about Ted: it has the potential to be really good, but just never puts in that extra bit of effort.
Posted by Norma Desmond at 8:00 AM