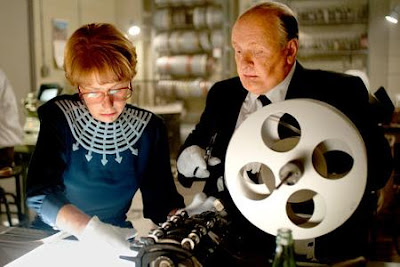 Sacha Gervasi's Hitchcock is a fine movie, a mostly light and airy look at the making of a masterpiece and the master filmmaker at its helm. The problem, of course, is that all that talk about that masterpiece sort of puts this film, which is far from that status, in a less than stellar light. Psycho is a watershed movie, one of most influential ever made, and Hitchcock never gets anywhere near that greatness. Granted, it never really tries - it seems content to simply be a run of the mill biopic (albeit a very charming one) - but while watching it you can't help but compare it to a film, and others like it, that did so much more for the art form.

Hitchcock opens in 1959, with Alfred Hitchcock (Anthony Hopkins) riding high on the success of North By Northwest. Or, at least, he should be. Instead he's searching for his next project and battling against the notion that his best work is behind him and all that's left is a period of artistic decline. Although his wife and creative partner, Alma (Helen Mirren), encourages him to take on the latest project of her friend, Whitfield Cook (Danny Huston), he finds himself drawn to a story inspired by Ed Gein and titled Psycho. When he announces his desire to make Psycho his next film he's met with resistance from all corners and eventually has to resort to financing the film himself, mortgaging his and Alma's home in order to secure the budget.

As shooting gets under way, tensions continue to rise. The censors threaten to sink the project, Hitchcock's one-time protege Vera Miles (Jessica Biel) warns star Janet Leigh (Scarlett Johansson) to be careful in her relationship with the director (and not without reason given his, ahem, weirdness with his leading ladies), Hitchcock struggles to keep the project running on time and on budget and free from studio interference, while also finding himself haunted by Gein and the dark impulses that the director believes have root at everyone's core, and Alma, on whom Hitchcock relies as a support and a collaborator, is largely absent from the project. He's jealous of the amount of time Alma is spending with Cook, helping him with his project, and his frustrations begin to show in his behavior on set, particularly during the famous shower scene. When all is said and done, Hitchcock has a movie but one that he's deeply disastisfied with. Undeterred, Alma suggests that they go back to the editing room and the rest is movie history.

Although Hitchcock concerns the making of one of Hitchcock's darkest works, the film is primarily light, even whimsical, in tone with a few short forays into psychological darkness. The mixture is sometimes uneasy but works more often than not and primarily because Hopkins is such a strong actor. A lot of makeup is involved in transforming him into Hitchcock, which can sometimes be a hinderance for a performance, but Hopkins is able to act past the prosthetics to suggest the inner life and turmoil of the character. In one scene in particular, when he and Alma finally have it out (which is, incidentally, also a marvelous scene for Mirren), he acts almost entirely with his eyes and still manages to convey a range of emotions that lift the veil and reveal the vulnerability and fear behind his anger that Alma isn't supporting him the way that he thinks she ought to. He plays Hitchcock as a deeply insecure man, one who feels (quite rightly) that he's never been given his due by Hollywood, that he's seen as a purveyor of cheap thrills rather than the skilled artist that he is. He's also, perhaps, afraid that he can't stand on his own should he ever lose Alma.

Given that the film is named for the director, it's surprising how much time is devoted to Alma. In many respects, it seems that the project is as much about giving her her due as it is about celebrating the master of suspense. At times this makes Hitchcock seem a little lacking in focus (is it a story about the woman behind the man toying with the idea of coming out from his shadow, or is it a story about how the director's anxieties about his personal life informed one of his best works?), but for the most part, because the film has such a low stakes attitude, that ultimately doesn't matter. I enjoyed Hitchcock quite a bit, largely because of the performances from Hopkins and Mirren, and would recommend it on that basis, but it is an undeniably unambitious film. It isn't bad by any means, but it's also not the kind of film that leaves any lasting impact on the viewer.
Posted by Norma Desmond at 8:00 AM