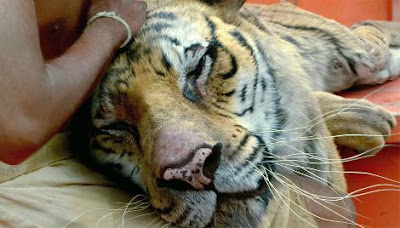 That Life of Pi exists at all is amazing, that it exists in such excellent form is a minor cinematic miracle. Based on an "unfilmable" book, centering almost exclusively on two characters, one of whom is a tiger, and almost exclusively in one small location, and giving the bulk of the emotional heavy lifting to a first time actor, Life of Pi has more obstacles than any one film should be able to overcome. And yet, here it is, not just existing, but existing in a form that is best described as glorious. Not perfect, perhaps, but pretty damn close.

The story of Life of Pi is told far after the fact by the adult version of its protagonist, Pi Patel (Irrfan Khan), to a writer (Rafe Spall) who has been told that Pi's story will make him believe in God. That story begins in French India, where Pi (Suraj Sharma) is the second son of a family that owns the local zoo, and finds himself drawn towards all religions as he comes of age, taking a little bit from each to create a spiritual life all his own. At the age of 16, with the political tides in India changing, Pi's father decides to move the family to Canada, bringing the zoo animals along in order to sell them and start their new life. They set sail on a Japanese freighter, which sinks during a brutal storm, taking everyone with it except Pi, a zebra, an orangutan, a hyena, and a tiger known as Richard Parker.

Being stuck on a lifeboat with a tiger is a bad place to be, and the three other animals quickly meet their fate (though it is the hyena who does much of the killing; the tiger is simply the beast who enjoys the spoils). Pi, meanwhile, creates a makeshift raft that allows him to survive at a relatively safe distance from the lifeboat. Of course, this can't be a permanent situation and Pi will need to find a way back onto the boat if he's going to survive. As time goes on and hunger makes them both weaker, Pi and Richard Parker come to a kind of mutual understanding, with Pi coming to the realization that his humanity makes it impossible for him to simply let Richard Parker die, and Richard Parker seeming to come to the understanding that his chances for survival are greater as long as he refrains from eating his human companion.

Life of Pi relies heavily on CGI, but uses the technology well. It is a wonderfully rendered and visual stunning film, full of haunting beauty and intense action sequences. Director Ang Lee opts to suggest rather than directly depict the brutality of nature when it comes to animals killing each other, showing some of the aftermath but not the actual attack. In doing so he reinforces the idea that Pi and Richard Parker may transcend the natural gulf between them and makes it more believable that Pi would choose to continue the journey with the tiger rather than letting him die when he has the chance. Like so many other elements of the film, the tiger comes courtesy of CGI, though some shots feature actual tigers. It is a credit to the effects team that the real and the CGI tigers are indistinguishable from each other.

But the film isn't built solely on effects and relies just as heavily on its ability to tap into real, human emotion. Sharma bears a heavy burden, carrying the vast majority of the film and spending a large stretch of it without having any other actors to engage with. His character undergoes great physical changes as the film progresses, as well as mental changes as grief, loneliness and hopelessness begin to take their toll. There are no false notes in his performance, which moves seamlessly from fear to joy, sometimes in the same scene. Slightly less engaging are the scenes from the framing story, in which the grown up Pi talks to the writer, which never quite gain the emotional impact that the middle section of the film seems to reach with such ease. Moreover, the film's attempts to engage themes of religion and spirituality are sometimes a bit facile and lacking in subtlety, particularly during the framing story. Still, even the film's weakest sections are not without their strengths and overall Life of Pi is an excellent piece of work, both visually and narratively.
Posted by Norma Desmond at 8:00 AM

This was a great movie review. I am really looking forward to getting out to see this movie.